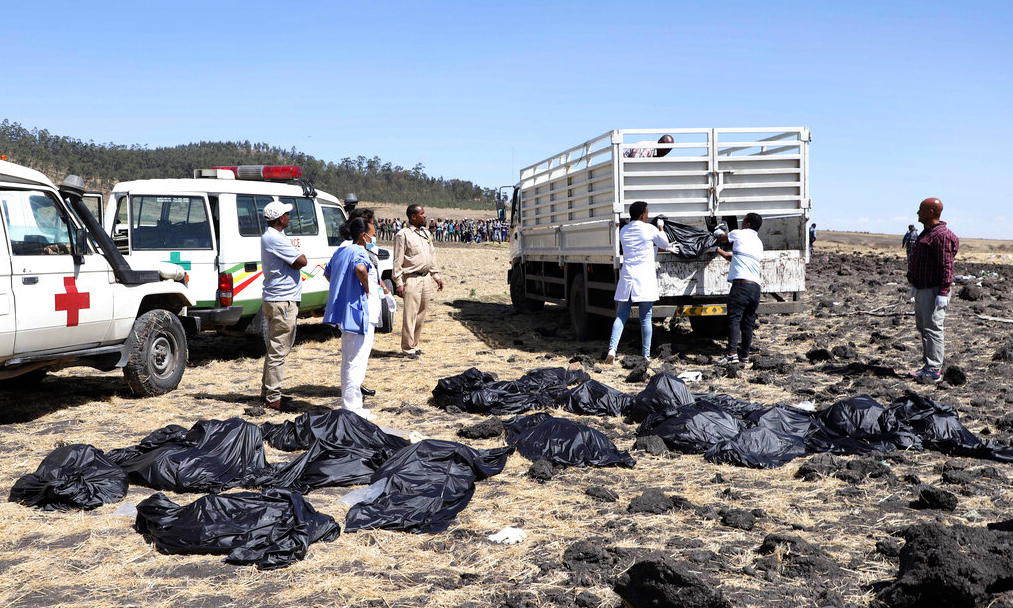 A jetliner with passengers from at least 35 countries, including India, crashed on Sunday shortly after leaving Ethiopia’s capital, killing all 157 people on board and renewing concerns about the new model of aircraft involved in the accident, the popular Boeing 737 Max 8.

After taking off from Addis Ababa in good weather and with clear visibility, Ethiopian Airlines Flight 302, bound for Nairobi, Kenya, struggled to ascend at a stable speed, according to flight data published by FlightRadar24.

The pilot sent out a distress call and was cleared to return to the airport, Bole International, the airline’s chief executive told reporters.

But the plane — the same Boeing model that went down in Indonesia in October, killing all 189 people on board — lost contact with air traffic controllers six minutes after takeoff. It then plummeted to the ground near Bishoftu, a town southeast of the capital.

“At this stage, we cannot rule out anything,” the airline’s chief executive, Tewolde GebreMariam, told reporters.

Images from the vast, smoky crater at the crash site revealed a grim tableau. Workers loaded black body bags into a truck, while plane fragments and various items from the flight — cigarettes, shoes, napkins with the Ethiopian Airlines logo — were strewn across the field.

Flight 302 — a two-hour shuttle between two of the busiest capitals in East Africa — was carrying passengers from at least four continents. The dead included 32 Kenyans, 18 Canadians, nine Ethiopians, eight each from the US, China and Italy, and seven each from France and Britain, the airline said.

The passengers also included delegates travelling to Nairobi for a weeklong United Nations Environment Assembly that had been scheduled to start on Monday. Four Indians were among the passengers.

While the cause of the crash was unclear, the disaster is certain to raise more doubts about the safety of the 737 Max 8, one of Boeing’s fastest-selling airplanes.

The plane, delivered to Ethiopian Airlines in November, was new, just like the Lion Air airplane that plunged nose down into the Java Sea last October, minutes after taking off from Jakarta, the Indonesian capital.

Flight 302 took off in good weather, but its vertical speed became unstable right after takeoff, fluctuating wildly, according to data published by FlightRadar24 on Twitter. In the first three minutes of flight, the vertical speed varied from zero feet per minute per hour to 1,472 to minus 1,920 — unusual during ascent.

“During takeoff, one would expect sustained positive vertical speed indications,” Ian Petchenik, a spokesman for FlightRadar24, said in an email on Sunday.

The Lion Air accident also involved a plane that crashed minutes after takeoff and after the crew requested permission to return to the airport. The Lion Air pilots struggled to keep the plane ascending, with the jet’s nose forced dangerously downward over two dozen times during the 11-minute flight.

The National Transportation Safety Board in the United States said that it would send a four-person team to assist Ethiopian authorities investigating Sunday’s crash. The Federal Aviation Administration said in a statement: “We are in contact with the State Department and plan to join the NTSB in its assistance with Ethiopian civil aviation authorities to investigate the crash.”

Boeing said in a statement on Twitter that a technical team was ready to provide assistance at the request of the safety board.

In the Lion Air crash, officials are investigating whether changes to the Max 8’s automatic controls might have sent that flight into an unrecoverable nose dive.

Investigations by Indonesian and American aviation authorities have determined that the Lion Air plane’s abrupt nose-dive may have been caused by updated Boeing software that is meant to prevent a stall but that can send the plane into a fatal descent if the altitude and angle information being fed into the computer system is incorrect.