America’s truth is without Ruth now 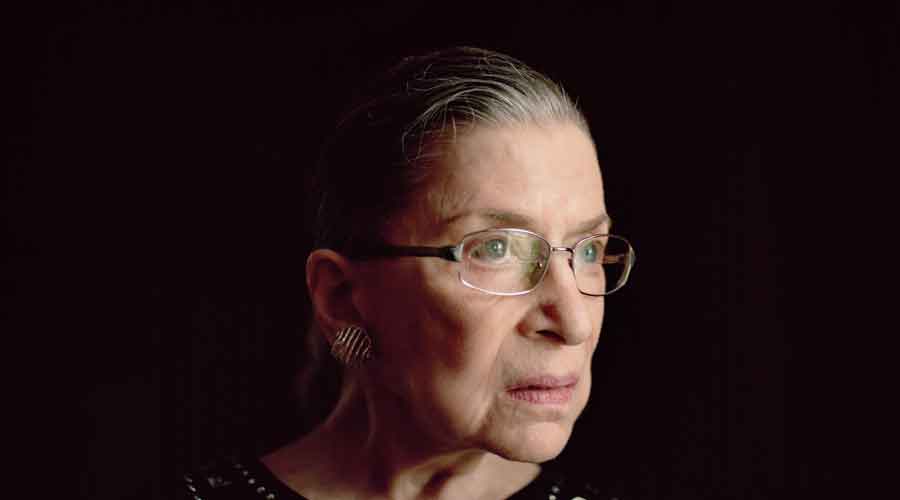 Ruth Bader Ginsburg, the second woman to serve on the Supreme Court and a pioneering advocate for women’s rights, who in her ninth decade became a much younger generation’s unlikely cultural icon, died at her home in Washington on Friday. She was 87.

The cause was complications of metastatic pancreatic cancer.

A fierce political battle shaped up over the future of the US Supreme Court on Saturday, with President Donald Trump saying he would quickly name a successor to Ginsburg, a move that would tip the court further to the Right.

Trump’s short list of potential nominees includes two women jurists: Amy Coney Barrett and Barbara Lagoa, according to a source close to the White House. Ginsburg’s death has potentially shifted the focus away from the coronavirus pandemic and the stagnant economy into a political battle over her successor.

The sudden vacancy means the November election has become much more than a battle between Trump and his Democratic opponent Joe Biden for the White House and control of Congress, political strategists say.

Now, they say, it is an existential fight over civil rights, abortion, immigration, and the future of health care for millions of Americans.

Barely five feet tall and weighing 45kg, Justice Ginsburg drew comments for years on her fragile appearance. But she was tough, working out regularly with a trainer.

As Justice Ginsburg passed her 80th birthday and 20th anniversary on the Supreme Court bench during President Barack Obama’s second term, she shrugged off a chorus of calls for her to retire in order to give a Democratic President the chance to name her replacement.

When Justice Sandra Day O’Connor retired in January 2006, Justice Ginsburg was for a time the only woman on the Supreme Court — hardly a testament to the revolution in the legal status of women that she had helped bring about in her career as a litigator and strategist. Eventually she was joined by two other women, both named by Obama: Sonia Sotomayor in 2009 and Elena Kagan in 2010.

Justice Ginsburg’s pointed and powerful dissenting opinions, usually speaking for all four, attracted growing attention as the court turned further to the Right. A law student, Shana Knizhnik, anointed her the Notorious R.B.G., a play on the name of the Notorious B.I.G., a famous rapper who was Brooklyn-born, like the justice.

Soon the name, and Justice Ginsburg’s image — her expression serene yet severe, a frilly lace collar adorning her black judicial robe, her eyes framed by oversize glasses and a gold crown perched at a rakish angle on her head — became an Internet sensation.

Young women had the image tattooed on their arms; daughters were dressed in R.B.G. costumes for Halloween. “You Can’t Spell Truth Without Ruth” appeared on bumper stickers and T-shirts. A biography, Notorious RBG: The Life and Times of Ruth Bader Ginsburg, by Irin Carmon and Knizhnik, reached the best-seller list the day after its publication in 2015, and the next year Simon & Schuster brought out a Ginsburg biography for children with the title I Dissent.

A documentary film of her life was a surprise box office hit in the summer of 2018, and a Hollywood biopic centred on her first sex discrimination court case opened on Christmas Day that year.

The adulation accelerated after the election of Trump, whom Justice Ginsburg had had the indiscretion to call “a faker” in an interview during the 2016 presidential campaign. (She later said her comment had been “ill advised”.)

Her late-life rock stardom could not remotely have been predicted in June 1993, when President Bill Clinton nominated the soft-spoken, 60-year-old judge.

As lawyer, Ginsburg had argued cases that were to become legal landmarks. She presented six cases to the court from 1973 to 1978, winning five. Her goal was to persuade the Supreme Court that the 14th Amendment’s guarantee of equal protection applied not only to racial discrimination but to sex discrimination as well.

There was a successful challenge to an Idaho law that gave men preference over women to be chosen to administer estates. There was a case challenging a military regulation that denied husbands of women in the military some of the benefits to which wives of male soldiers were entitled.

Another case challenged a Social Security provision that assumed wives were secondary breadwinners whose incomes were unimportant to the family and therefore deprived widowers of survivor benefits. In that 1975 case, as in several others, the plaintiff was a man.

Nearly 20 years after making her last argument before the Supreme Court, Justice Ginsburg announced the court’s majority opinion in a 1996 discrimination case involving the Virginia Military Institute in Lexington. By a lopsided 7 to 1, the court had found that the all-male admissions policy of a state-supported military college was unconstitutional.

It was during that 2006-7 Supreme Court term that Justice Ginsburg’s powerful dissenting voice emerged. Another decision that term provoked another strong dissent. The court voted 5 to 4 in the case of Ledbetter v. Goodyear Tire and Rubber Company to reject a woman’s pay discrimination claim on the grounds that the woman, Lilly Ledbetter, had not filed her complaint within the statutory 180-day deadline. The majority opinion held that the 180-day clock had started running with Ledbetter’s first paycheque reflecting the management’s decision to pay her less than it paid the men in the same job.

Justice Ginsburg objected to that, properly interpreted, the 180-period began only when an employee actually learned about the discrimination. Congress should make this clear, she wrote, declaring: “The ball is in Congress’s court.” It worked. Congress voted to overturn what Justice Ginsburg called the court’s “parsimonious reading” of Title VII of the Civil Rights Act of 1964. On January 29, 2009, the Lilly Ledbetter Fair Pay Act was the first bill that Obama signed into law.

It was her dissents, particularly those she announced from the bench that received the most attention. Playing along with her crowd, she took to switching the decorative collars she wore with her judicial robe on days when she would be announcing a dissent. She even wore her “dissenting collar”, which one observer described as “resembling a piece of medieval armour”, the day after Trump’s election.