Ukraine's military said it was working to evacuate remaining troops from the Azovstal steelworks in Mariupol. The port city had been under Russian siege since the start of the war 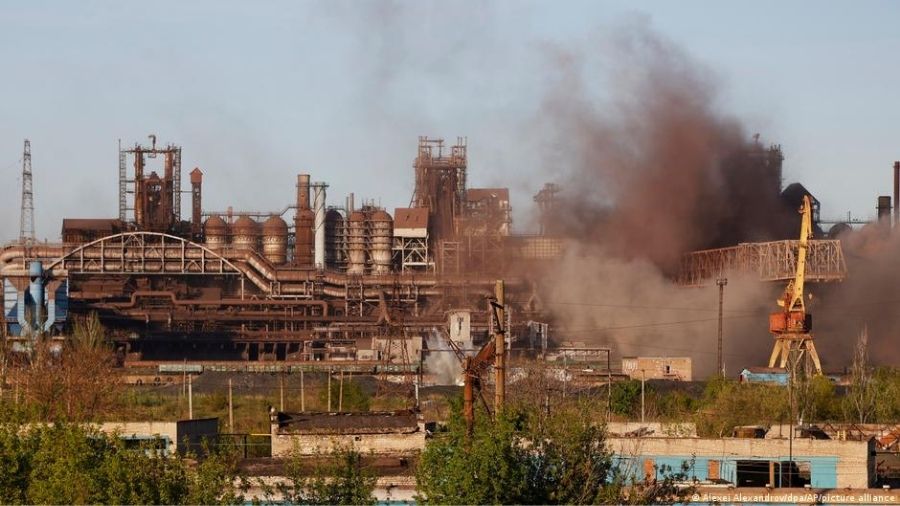 Ukraine's military said it was working to evacuate remaining troops from the Azovstal steelworks in Mariupol. The port city had been under Russian siege since the start of the war.

Ukraine cedes control of Azovstal plant to Russia
Ukraine's military said it was working to evacuate all remaining troops from the Azovstal steelworks in Mariupol.

"The 'Mariupol' garrison has fulfilled its combat mission," the General Staff of Ukraine's Armed Forces said in a statement on Facebook.

"The supreme military command ordered the commanders of the units stationed at Azovstal to save the lives of the personnel... Defenders of Mariupol are the heroes of our time."

Civilians were evacuated from the plant in recent weeks, and more than 260 troops left the plant for Russian-controlled areas late on Monday. Ukrainian Deputy Defense Minister Hanna Maliar said 53 injured troops were taken to a hospital in the town of Novoazovsk, which is under Russian control.

Maliar said that the fighters defending Mariupol had given Kyiv critically important time to build up reserves and regroup forces. She added that the most important thing now was to save the lives of remaining fighters.

"We hope that we will be able to save the lives of our guys," Zelenskyy said. "There are severely wounded ones among them. They're receiving care."

Turkish concerns over NATO enlargement need to be addressed — Stoltenberg

NATO Secretary General Jens Stoltenberg said Turkish concerns over Finland and Sweden's possible membership in the alliance need to be taken into account.

Stoltenberg made the comments following a meeting with Turkish Foreign Minister Mevlut Cavusoglu.

"Turkey is a valued ally and any security concerns need to be addressed," Stoltenberg tweeted on Monday.

Turkey has said it will only accept the two Nordic countries' membership if certain conditions are met. Ankara has accused Finland and Sweden of supporting the Kurdish Workers' Party (PKK) and the associated YPG militia active primarily in northeastern Syria, groups it classifies as "terrorist organizations."

Explosions reported in Lviv
The western Ukrainian city of Lviv has reportedly been hit by at least eight explosions. The explosions occurred shortly after midnight local time (2100 GMT). Lviv is under curfew from 11 p.m. to 6 a.m. local time.

The city's mayor, Andriy Sadovyy, said that there was no confirmed information about missiles hitting the city.

"Let's thank those who protect our sky for this!" Sadovyy said. "In the morning we will give more accurate information. Take care of yourself and do not ignore air alarms!"

Summary of events in Ukraine-Russia crisis on Monday
Luhansk regional governor Serhiy Haidai said that "at least 10 civilians" had been killed in Russian shelling in the city of Sievierodonetsk. Previously, Donetsk governor Pavlo Kyrylenko said that nine civilians were killed and six injured in Russian attacks.

The president of the International Federation of Red Cross and Red Crescent Societies (IFRC) said that there was a "double standard" in the treatment of migrants from different countries who come to Europe.

German Chancellor Olaf Scholz said he sees no sign of an imminent end to the war in Ukraine.

The Russian Ministry of Defense that it had reached an agreement for injured Ukrainian soldiers stuck in the Azovstal steel plant in the besieged southeastern port city of Mariupol to be evacuated to the nearby town of Novoazovsk.

Russian President Vladimir Putin said that any expansion of military infrastructure on the territory of Sweden and Finland, should they end up joining the NATO alliance, would require a reaction from Moscow.

McDonald's announced that it will be completely exiting Russia and selling its business in the country to a local buyer.