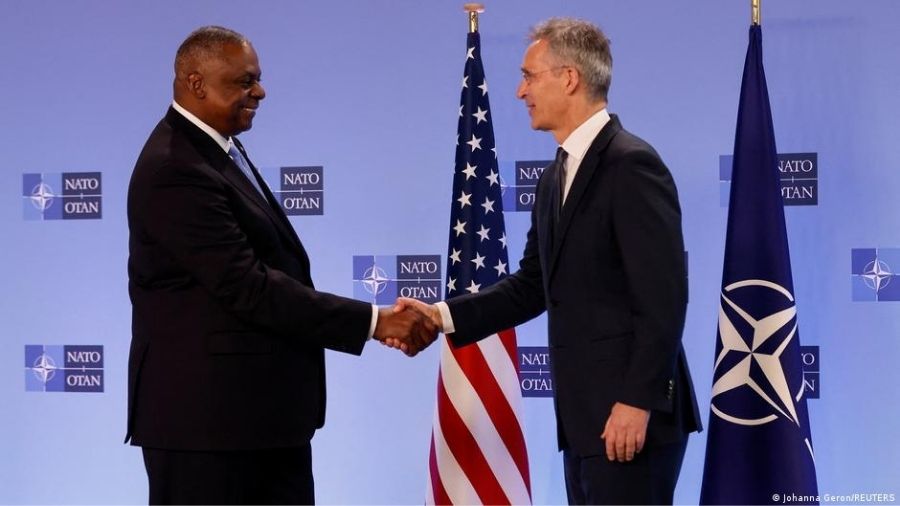 The NATO alliance looks to strengthen security along its eastern flank following Russia's "brutal" invasion of Ukraine. Hundreds of thousands of troops in Europe are on "heightened alert."

An extraordinary meeting of NATO defense ministers is being held in Brussels on Wednesday. Russia's invasion of Ukraine and the impact on regional security in eastern Europe will be the key focus.

NATO Secretary-General Jens Stoltenberg said ahead of talks that "the brutal invasion of Ukraine by Russia" would be addressed.

"This is devastating for the Ukrainian people and it will also change our security environment. It will have long lasting consequences for our security, for all NATO allies," Stoltenberg said.

The NATO chief said the alliance was reinforcing its collective defense, adding that "hundreds of thousands of troops were on heightened alert."

One hundred thousand US troops are in Europe according to Stoltenberg, with 40,000 under direct NATO command.

Stoltenberg said both the immediate and long-term consequences of Russia's actions would be spoken about with emphasis on strengthening the defense of all NATO members.

The secretary-general stressed that NATO had a responsibility to ensure the "crisis" didn't escalate beyond the borders of Ukraine, which explained the bolstered troop numbers along the eastern flank of the alliance.

Next week an extraordinary summit of NATO leaders is due to be held.

Ukraine's ties to NATO and the EU

Ukraine has been looking to become an EU member state and a NATO member for years, but over the weekend, EU leaders made it clear that there could be no shortcut to EU membership, following the two-day informal summit at the Palace of Versailles in France.

The country's hopes of becoming part of the NATO security alliance also don't appear to be any closer to materializing.

"Ukraine is not a member of NATO, we understand that. We are decent people. We've heard for years that the doors were open, but we also heard that we could not join. Thats the truth and it must be recognized. I'm glad that our people are beginning to understand this, and rely on themselves and our partners who are helping us," Ukrainian President Volodymyr Zelenskyy said on Tuesday.

Russia views Ukraine's NATO aspirations as a threat to its security and has accused the alliance of encroaching east.