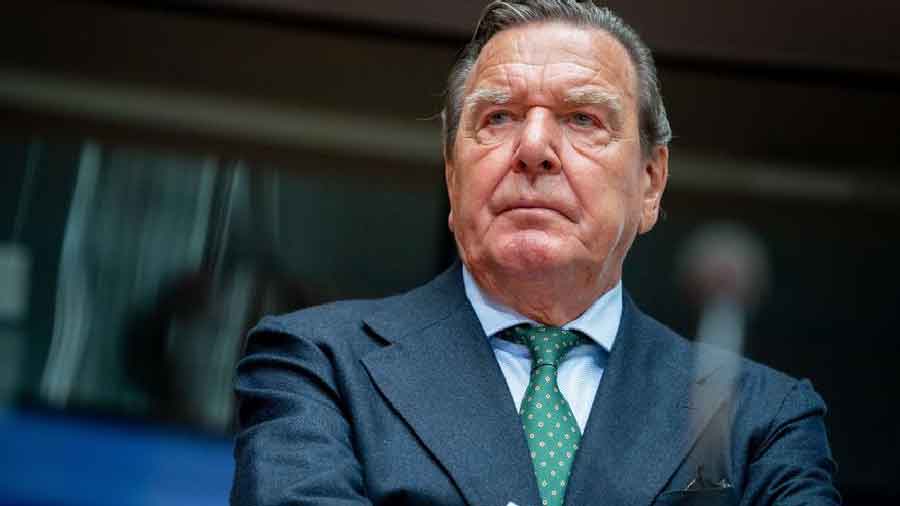 Schröder has resisted pressure to resign his positions, also arguing that, sooner or later, 'we will have to go back to dealing with Russia'
Deutsche Welle
Deutsche Welle   |   Published 28.04.22, 11:49 PM

Former German Chancellor Gerhard Schöder is coming under increasing pressure in Germany over his relations with Vladimir Putin amid the ongoing Ukraine invasion.

Having already being asked to resign from the party he once led, the Social Democrats, German politicians are now threatening further action, even suggesting he could become a target of Western sanctions targeting Russia and its allies.

Schröder led Germany from 1998 to 2005, and since leaving office, he has worked for Russian state energy firm Rosneft and the Nord Stream projects. He has also been nominated for the supervisory board of the Russian gas giant Gazprom, which on Wednesday switched off gas exports to Poland and Bulgaria.

What did Schröder say?

In an interview with the New York Times published last week, Schröder defended his close relationship with Russia and Putin. In the interview, Schröder questioned the Russian president's potential involvement in or prior knowledge of the massacre in Ukraine's Bucha, refused to resign from the energy firms unless Russia fully stopped gas exports, and spoke fondly of Putin.

"I don't do mea culpa," Schröder told the outlet. "It's not my thing."

Speaking on the war, Schröder said it was a "mistake." "What we have to do now is to create peace as quickly as possible." But he said there were obstacles to negotiations.

"What I can tell you is that Putin is interested in ending the war," Schröder said. "But that's not so easy. There are a few points that need to be clarified."

On the atrocities in Bucha, Schröder defended Putin, saying he doubted that the president would have ordered the killings himself, but said it should be investigated.

He baulked at the idea of distancing himself from Putin, saying it would lose him the trust of the only person who can stop the war.

Schröder attempted once to mediate in talks between the two countries but walked away unsuccessful after one attempt. He claims he is ready to try again.

Speaking on gas, he said his support of Russian gas exports to Europe was in line with the common political position of Germany. Schröder said Russia had always been a reliable partner when it came to delivering gas to Germany and Europe. "They got the money and they delivered the gas," Schröder told the publication. "Even in the toughest times of the Cold War, there were never any problems."

"You can't isolate a country like Russia in the long run, neither politically nor economically," he said. "German industry needs the raw materials that Russia has. It's not just oil and gas, it's also rare earths. And these are raw materials that cannot simply be substituted."

"When this war is over," Schröder said, "we will have to go back to dealing with Russia. We always do."

What further actions does Schröder face?

A growing chorus of MPs are calling for sanctions on Schröder. He "belongs on the sanctions list of Putin profiteers," Moritz Körner, a leading member of the pro-business FDP, told the Handelsblatt newspaper. He said Schröder was Putin's most important man in Germany.

Roderich Kiesewetter, a foreign policy expert from the conservative CDU said: "The fact that Schröder still does not distance himself from Putin and Russia only shows how deeply he is in Putin's service."  SPD leader Saskia Esken called on Schröder to leave the party. "He earns his money working for Russian state-owned enterprises," she said.

The chairman of the Foreign Affairs Committee in the Bundestag, Michael Roth, told the Deutsche Presse-Agentur: "Another indication of the tragedy of the Schröder case is that we have to seriously discuss sanctions against a former chancellor who has become a Russian energy lobbyist."

German politicians have questioned whether the state should continue providing funding for offices and staff for him.  The pensions of chancellors, presidents and Cabinet members are regulated by law, but other provision fall under the budget of the Bundestag.

Several employees have already resigned from their posts at Schröder's office since the invasion. Greens politician Reinhard Bütikofer said Schröder should be stripped of his official endowment as ex-chancellor.

Bundestag deputy speaker Wolfgang Kubicki said: "I think it is indispensable to have a fundamental discussion about the extent to which these post-chancellor offices must, in case of doubt, continue to be fully staffed for decades," the FDP politician told the Redaktionsnetzwerk Deutschland newspaper group.

The parliamentary director of the Green party, Irene Mihalic, confirmed reports that the Bundestag's budget committee was examining the reduction of the former chancellor's privileges.