Sanctions on Russia bearing immediate impact on the country's economy, with queues forming outside banks as citizens rush to salvage their savings 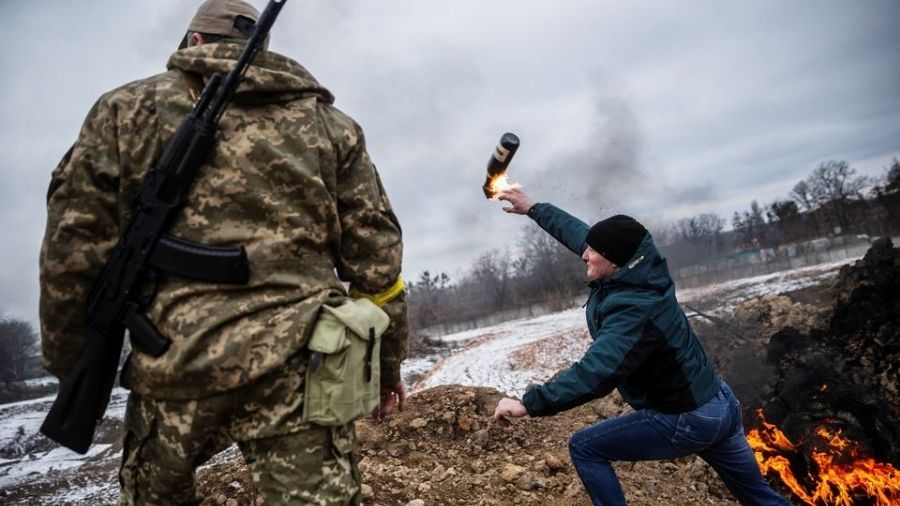 A civilian trains to throw Molotov cocktails to defend the city, as Russia's invasion of Ukraine continues, in Zhytomyr, Ukraine.
Reuters
Reuters   |   Kyiv   |   Published 02.03.22, 07:32 AM

Ukraine's besieged cities were bracing for more attacks on Wednesday as Russian commanders facing fierce Ukrainian resistance intensify their bombardment of urban areas in a push toward the capital Kyiv.

Already shunned by the West over its invasion of Ukraine, Russia has shown no sign of stopping an assault that has included strikes on Kyiv and rocket attacks in the second city of Kharkiv. Dozens have been killed.

Facing emboldened Ukrainian troops bolstered by citizen soldiers, Russia has failed to capture a single city since its full-scale invasion began nearly a week ago. Western analysts say Russia has fallen back on tactics that call for devastating built-up areas before entering them.

Hundreds of thousands of Ukrainians have fled the fighting as a miles-long Russian military convoy north of Kyiv advances toward the city. West of Kyiv, in the city of Zhytomyr, four people, including a child, were killed on Tuesday by a Russian cruise missile, a Ukrainian official said.

Russian President Vladimir Putin has drawn global condemnation and sanctions that have sent the rouble to historic lows and forced Russians to queue outside banks for their savings.

Putin ordered the "special military operation" last Thursday in a bid to disarm Ukraine, capture the "neo-Nazis" he says are running the country and crush its hopes of closer ties to the West.

Ukraine, which is not a member of NATO, has called on the U.S.-led military alliance to implement a no-fly zone - a request rejected by Washington, which fears stoking a direct conflict between the world's two biggest nuclear powers.

Washington and its allies have instead sent weapons to Kyiv, and Treasury Secretary Janet Yellen said the United States had agreed with partners to convene a task force "to freeze and seize the assets of key Russian elites".

The move "will inflict financial pain on the powerful individuals surrounding Putin and make clear that no one is beyond our collective reach," Yellen said in a statement following a Tuesday call with Group of Seven officials.

The West has imposed heavy sanctions on Russia to shut off its economy from the global financial system, pushing international companies to halt sales, cut ties, and dump tens of billions of dollars' worth of investments.

The sanctions have had an immediate impact on Russia's economy, with queues forming outside banks as Russians rush to salvage their savings.

Exxon Mobil joined other major Western energy companies including British BP PLC and Shell in announcing it would quit oil-rich Russia over the invasion.

Several countries have moved to ban Russian planes from their airspace, and U.S. President Joe Biden was expected to announce a similar ban during his State of the Union speech on Tuesday night, a source familiar with the situation said.

The heaviest Russian bombardment so far appeared to be around Ukraine's second-largest city Kharkiv, near the border with Russia. A Russian strategic bomber fired 16 guided missiles toward a residential area of Kharkiv on Monday, Ukraine's defence ministry said.

"According to preliminary data, dozens of Kharkiv residents, including children, died from these airstrikes," the ministry said on its Facebook page.

In Ukraine's largely Russian-speaking city of Donetsk, in territory controlled by Russian-backed separatists, authorities said three civilians had been killed by Ukrainian shelling.

Reuters was not able to confirm any of the incidents of reports of casualties. The United Nations says at least 136 civilians have been killed in the invasion, but that the real number of people is likely much higher.

Russia has not published any precise casualty figures for its own military, but says its losses have been far lower than those of Ukrainian forces.

Russian and Ukrainian negotiators met over a ceasefire on Monday but talks broke down with no further rounds yet announced. Ukrainian President Volodymyr Zelenskiy said on Monday that Russia must "first stop bombing people" before talks could make any headway.

Zelenskiy, who has been staying in a heavily guarded government compound in Kyiv, warns that the capital remains Russia's main target. Residents have been sheltering in underground metro stations at night for fear of attacks.

"We resist the invasive aggression," Zelenskiy wrote on Twitter late on Tuesday, after thanking Western leaders for their support. "Today, more than ever, it is important for us to feel that we are not alone."