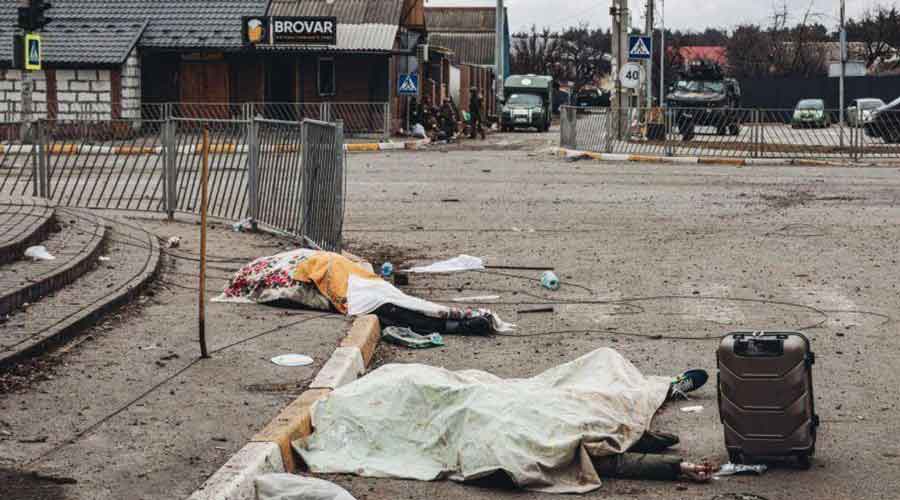 The mortar shells fell first 100 or so yards from the bridge, then shifted in a series of thunderous blasts into a section of the street where people were fleeing.
Twitter/@StratcomCentre
Lynsey Addario   |   Irpin, Ukraine   |   Published 07.03.22, 02:10 AM

Frantic efforts to rescue civilians from the worsening violence in Ukraine came under direct attack by Russian forces on Sunday with at least three people killed in shelling outside Kyiv.

The three members of a family were killed when a Russian force advancing on Kyiv fired mortar shells at a battered bridge used by people fleeing the fighting.

Crowds of hundreds have clustered around the damaged bridge over the Irpin river since Saturday. Ukrainian forces had blown up the bridge earlier to slow the Russian advance.

Only a dozen or so Ukrainian soldiers were in the immediate area of the bridge on Sunday, not fighting but helping carry civilians’ luggage and children.

To cross a hundred yards or so of exposed street on the side of the bridge closer to Kyiv, people seeking to flee to the capital formed small groups and made a run for it together. Soldiers ran out, picked up children or luggage, and ran for cover behind a cinder block wall.

The mortar shells fell first 100 or so yards from the bridge, then shifted in a series of thunderous blasts into a section of the street where people were fleeing.

As the mortars got closer to the stream of civilians, people ran, pulling children, trying to find a safe spot. But there was nothing to hide behind.

A shell landed in the street, sending up a cloud of concrete dust and leaving one family — a mother, a father, a teenage son and a daughter who appeared about 8 years old — sprawled on the ground.

Soldiers rushed to help, but the woman and children were dead. The father still had a pulse but was unconscious and severely wounded.

Their luggage — a blue roller suitcase and some backpacks — was scattered about, along with a green carrying case for a small dog that was barking.

Ukrainian forces were engaged in clashes nearby, but not at the site where civilians were moving along the street. Outgoing mortar rounds could be heard from a Ukrainian position about 200 yards away.

The shelling suggested either targeting of the evacuation routes from Irpin, something of which the Ukrainian authorities have accused the Russian army after a railroad track used for evacuations was hit on Saturday, or disregard for the risk of civilian casualties.

Russian President Vladimir Putin said on Sunday that his campaign in Ukraine was going to plan and would not end until Kyiv stopped fighting.

Putin made his demand for Kyiv to end the fighting in a phone call with Turkish President Tayyip Erdogan, who appealed for a ceasefire.

Late on Sunday night, the Indian embassy in Ukraine asked the 700 students stranded at Sumy in the country’s northeast to be ready to leave on short notice.

Students stuck in Sumy told to get set to leave