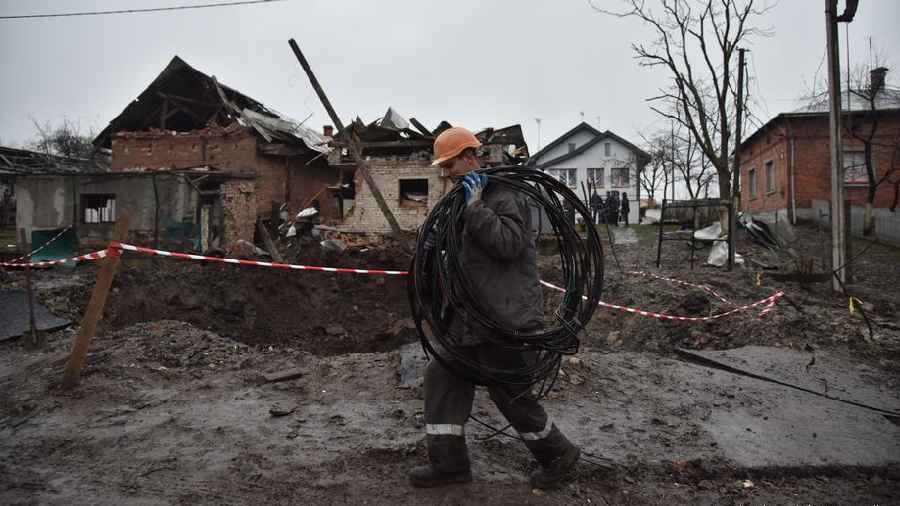 Ukrainian officials said at least four people had been killed and 11 others wounded in drone and missile strikes around the country.

"They are shelling our gas production and our enterprises in Dnipro," Prime Minister Denys Shmygal said at an economic forum.

In Kyiv, officials said two cruise missiles had been shot down. Officials in the Black Sea port of Odesa also reported airstrikes.

These power outages are "necessary measures to maintain the stability of the energy system after the sixth targeted missile attack" on infrastructure, the company said in a statement.

Russia condemned over landmine use

The Geneva-based Landmine Monitor has accused Russia of undoing progress made to reduce landmines over the past 25 years.

The organization said landmines used by Russia in Ukraine — as well those used by Myanmar — have marred the 25th anniversary of the Mine Ban Treaty of 1997.

"The greatest challenge to the emerging norm against these weapons can be seen in new use," it said

Some 165 countries have signed the treaty, which bans the use and stockpiling of land mines. Russia is not a signatory.

Landmine Monitor’s annual report identified 277 civilians who died from land mines or explosive remnants of war in Ukraine in the first nine months of 2022. That represents a fivefold increase from 2021.

"At least seven types of antipersonnel mines have been used by Russian forces in Ukraine since Russia invaded the country on February 24," it said. Some of them were manufactured as recently as last year.

Ukrainian Infrastructure Minister Oleksandr Kubrakov said on Thursday that the Black Sea grain deal between Ukraine and Russia will be extended for another 120 days.

An official announcement from Russia and Ukraine is expected later on Thursday.

Ukraine was a key source of the world's grain before Russia invaded, particularly in Africa and the Middle East, but Russia had threatened not to renew the deal in recent weeks.

UN Secretary-General Antonio Guterres welcomed the agreement "by all parties to continue the Black Sea Grain Initiative to facilitate the safe navigation of export of grain, foodstuffs and fertilizers from Ukraine."

Ukrainian police said they have found evidence of torture in Kherson, the Black Sea port city that was recaptured by Ukrainian troops last Friday.

Speaking on Ukrainian television late Wednesday, Interior Minister Denys Monastyrsky said people had been held captive at 11 locations. In four of these locations, he said there was evidence that prisoners had been tortured by Russian forces.

The information has not been independently confirmed. However, similar torture chambers have been found in the greater Kyiv and Kharkiv regions following Russian withdrawal.

"So far, 63 bodies have been found in the Kherson region," Monastyrsky said. "But we must be aware that the search has only just begun and many more torture chambers and burial sites will be discovered."

The newspaper was forced to suspend print and online publication in March during the press crackdown that followed Russia's invasion of Ukraine.

More on the war in Ukraine

More than 70 German intellectuals have signed an open letter calling for greater support for Ukraine. DW spoke with one of the signatories about how some people are becoming "numb" to the conflict.