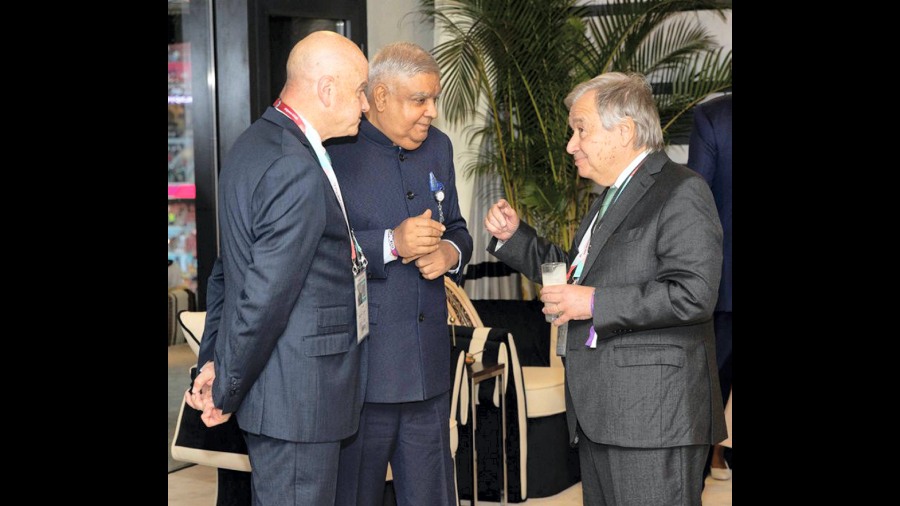 Dhankhar is in Doha for a two-day visit to represent India at the inauguration of FIFA's showpiece event. He is visiting Doha at the invitation of Qatar Emir Sheikh Tamim bin Hamad Al Thani.

He also met Sheikh Tamim during the inauguration of the FIFA World Cup 2022 at the Al Bayt Stadium in Qatar on Sunday.

"Hon'ble Vice President, Shri Jagdeep Dhankhar meeting with HH Sheikh Tamim bin Hamad Al Thani, Amir of the State of Qatar during the inaugural of FIFA World Cup 2022 at the Al Bayt Stadium in Qatar today," the Vice President of India tweeted along with a picture of the two leaders.

Besides attending the inaugural ceremony of the Football World Cup, the Vice President will interact with members of the Indian community during the visit.

The Vice President's visit would be an opportunity to join a close and friendly country Qatar as it hosts a major sporting event and also acknowledges the role played and support extended by Indians in this World Cup, the MEA statement said on Friday.

India and Qatar enjoy close and friendly relations with a multi-faceted partnership extending to areas of trade, energy, security, defence, health, culture, and education, among others, the MEA statement said.

India and Qatar will be celebrating 50 years of the establishment of full diplomatic relations next year.

The MEA statement said people-to-people ties form an important element of the bilateral relationship with over 840,000 Indians in Qatar.