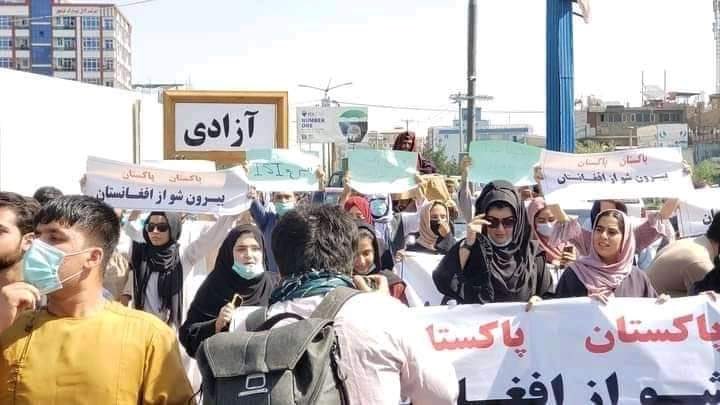 A number of men and women took to the streets of Kabul chanting slogans against Pakistan as they claimed the country's jets conducted airstrikes in Panjshir province.
PTI   |   Peshawar, Kabul   |   Published 07.09.21, 03:59 PM

Chanting "death to Pakistan", Afghan protesters, including women, took to the streets of Kabul on Tuesday, as they claimed that Pakistani jets conducted airstrikes in Panjshir province, according to a media report.

The Taliban on Monday said they have seized Panjshir, the last province not in their control, after their takeover of the US-backed Afghanistan government last month.

The Taliban members reportedly fired gunshots in the air to disperse the protestors but they were still agitating, the Khamma news agency of Afghanistan reported.

A number of men and women took to the streets of Kabul chanting slogans against Pakistan as they claimed the country's jets conducted airstrikes in Panjshir province, it said.

Chanting Death to Pakistan, Freedom, Allah Akbar and we do not want captivity among many other slogans, the protesters gathered at the gate of the Pakistani embassy in Kabul and asked its staff to leave Afghanistan, the report said.

The agitators said they do not want a puppet government in Afghanistan and asked for an inclusive government, it said.

The demonstrators gathered after Ahmad Masoud, the co-leader of the resistance front in Panjshir province, in a voice clip called on people of Afghanistan to resurrect against the Taliban.

According to the report, people in Blakh and Daikundi provinces also took to the streets on Monday night and chanted slogans against Pakistan.

Iran has also reacted to the airstrikes in Panjshir and the foreign ministry has asked for investigations over what he called the interference of foreign jets.

The spy chief dashed to Kabul on an unannounced visit.