The site saw an excessive rampage by protesters on July 9, forcing Gotabaya Rajapaksa to flee the country and resign as president 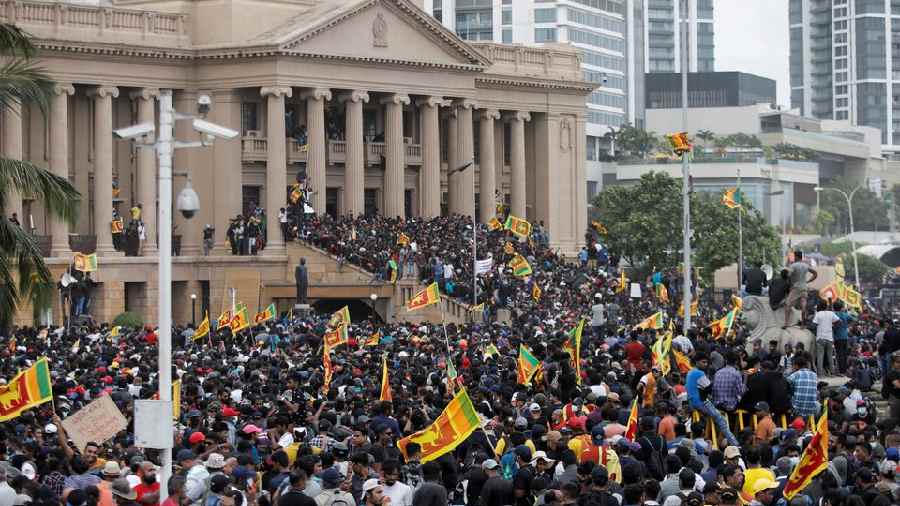 The protest disrupted work for a prolonged period at the Presidential Secretariat, which has gone through heavy damages during the agitation and requires necessary renovations.
File picture
Our Bureau, PTI   |   Colombo   |   Published 24.07.22, 12:31 PM

Sri Lanka's Presidential Secretariat, which was stormed by a sea of anti-government protesters in early July, is set to return to functioning from Monday under a tight security cover, according to a media report.

Cleaning and repair work was underway to ready the Presidential Secretariat over the weekend as security forces opened Galle Road in front of the Secretariat for traffic, a senior police official was quoted by the Sunday Times newspaper as saying.

The site, which had been blocked by protesters for more than 100 days, saw an excessive rampage by protesters on July 9, forcing Gotabaya Rajapaksa to flee the country and resign as president.

Security forces have already opened Galle road for traffic in front of the Secretariat, the report said.

In a pre-dawn raid on Friday, Sri Lankan security forces attacked a site of anti-government protesters at Galle Face, where several government offices are located, after they were given permission to take whatever action is necessary to stop people from illegally storming public facilities and obstructing the Parliament.

Protestors on Saturday stayed about 100 metres away from the Presidential Secretariat and held no protest during the day. Some of them were also seen playing cricket, the report said.

The protest, also known as the Aragalaya -- a Sinhalese word for "struggle" -- disrupted work for a prolonged period at the Presidential Secretariat, which has gone through heavy damages during the agitation and requires necessary renovations.

Police Media Spokesman SSP Nihal Thalduwa said the Presidential Office was a part of a wider system through which the President conducted his duties and the premises needed to be opened soon.

A Police spokesman said many valuable items, including items of vintage and antique value, had gone missing from Sri Lanka's Presidential Palace and Prime Minister's official residence at Temple Trees here after protesters stormed the sites.

The spokesman said an investigation was underway with the cooperation of other departments, including the Department of Archaeology, to ascertain the exact number of antiques that had gone missing, even though the police estimated that it could be well over 1,000.

Newly-elected President Ranil Wickremesinghe said he respects the rights of the protesters to peacefully undertake their demonstrations, but asserted that he would not allow another government building like the Presidential Palace or the Prime Minister's private residence to be occupied.

Meanwhile, police have started an investigation under the charge of trespassing against the people who occupied the President's Secretariat between July 9 and 21, Colombo Page reported.

It said that after checking the CCTV footage of the area the police had identified the main group who entered the President's House in Colombo Fort on July 9 and damaged its property and stole the antiques.

A bomb disposal unit has also been deployed to find out whether there are explosives in the President's House and the Presidential Secretariat.