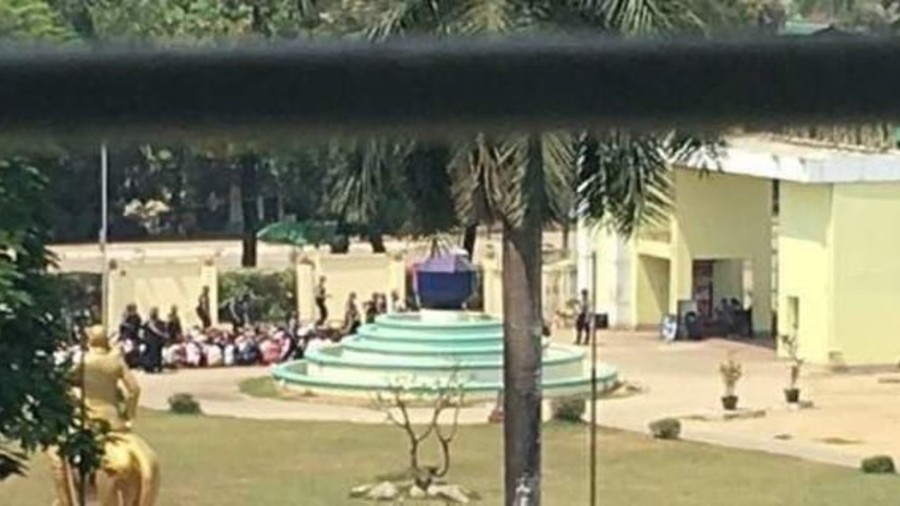 Myanmar security forces fired tear gas and surrounded hundreds of anti-junta protesters at two places in Yangon on Wednesday, witnesses said, prompting the US embassy to call for their withdrawal.

The UN Security Council agreed on a statement on Wednesday that condemns violence against Myanmar protesters and urges military restraint, diplomats said, but dropped language condemning the army takeover as a coup and threatening possible further action because of opposition by China, Russia, India and Vietnam.

The British-drafted statement, which had to be agreed by consensus, now has to be formally adopted at a council meeting.

More than 60 protesters have been killed and 1,900 people have been arrested in the turmoil in Myanmar since the February 1 coup, the Assistance Association for Political Prisoners, an advocacy group, has said. The military has brushed off condemnation of its actions, as it has in past periods of army rule when outbreaks of protest were forcibly repressed.

On Wednesday, the police stormed a compound in Yangon housing railway staff and surrounded hundreds of protesters in North Okkalapa district, in another part of the city. More than 100 people were arrested at the two sites, witnesses said.

Many of the railway staff are part of a civil disobedience movement that has crippled government business and included strikes at banks, factories and shops since the army ousted Aung San Suu Kyi’s elected government.

“We are seeing reports of innocent students and civilians surrounded by security forces in North Okkalapa, as well as arrests,” the US embassy said in a statement.

“We call on those security forces to withdraw from the area, release those detained, and allow people to depart safely.” Police and army officials did not respond to requests for comment.

On Tuesday, Zaw Myat Linn, an official from Suu Kyi’s National League for Democracy , died in custody after he was arrested, the second party figure to die in detention in two days.

“He’s been participating continuously in the protests,” said Ba Myo Thein, a member of the dissolved upper house of parliament. The cause of death was not clear. In a Facebook live broadcast before he was detained, Zaw Myat Linn urged people to continue fighting the army, “even if it costs our lives”.

Police on Tuesday also cracked down on independent media, raiding the offices of two news outlets and detaining two journalists.

At least 35 journalists have been arrested since the February 1 coup, Myanmar Now reported, of which 19 have been released.

“It is grim, it is horrifying, and it is heart breaking,” Thin Lei Win, the co-founder of the independent Myanmar Now said in an interview. “Protesters as well as journalists are going out every single day wondering whether this is the last day that they are going to be doing their job. And I really fear that things will get worse before they get better.”

Meanwhile, after being banned from Facebook and YouTube, Myanmar state network MRTV, which is now controlled by the military, has moved to publishing videos on online platform Vimeo.

Since the account was created this month, the MRTV Vimeo channel has posted 141 news bulletins, including many announcements by the military leadership. Neither Vimeo, MRTV, nor an army spokesman responded to requests for comment.