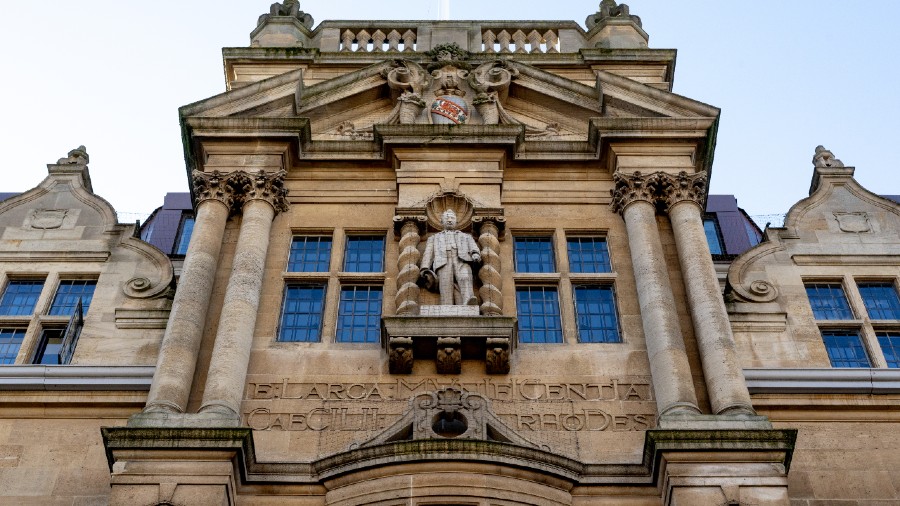 Britain’s increasingly vicious culture wars have taken an unusual twist with some 150 academics at Oxford University signing a petition which warns that they will boycott undergraduates at Oriel College unless it removes a statue of its imperialist benefactor Cecil Rhodes from the building’s façade.

Tory MP Tim Loughton summed up the hostility to the move from the Boris Johnson government: “This is academic blackmail by a group of academics who think their own political views should trump everyone else’s, and if they don’t get their own way then any innocent students who happen to fall within their boycott will become the victims.”

But the “Rhodes Must Fall” campaign has described Oriel College’s determination to retain the statue of Rhodes as “an act of institutional racism”.

Following a tortuous review, the governing body of Oriel College, founded in 1326, announced last month that it had finally decided not to remove the statue of Rhodes, the British imperialist who left his alma mater a generous bequest when he died in 1902.

He founded Rhodesia, served as Prime Minister of the Cape Colony in the 1890s, and supported apartheid-style measures in southern Africa.

In their petition — this has outraged Britain’s Right-wing lobby which believes the Empire was on the whole a civilising influence and a force for good — the academics say: “The Collegiate University can only effectively and credibly work to eradicate racism and address the ongoing effects of colonialism today if all the Colleges do so.”

They add: “Oriel College’s decision not to remove the statue of Cecil Rhodes undermines us all. Faced with Oriel’s stubborn attachment to a statue that glorifies colonialism and the wealth it produced for the College, we feel we have no choice but to withdraw all discretionary work and goodwill collaborations.

“With regret, then, we, the undersigned, agree that until Oriel makes a credible public commitment to remove the statue, we shall: Refuse requests from Oriel to give tutorials to Oriel undergraduates; Refuse to assist Oriel in its outreach and access work, including undergraduate admissions interviewing; Refuse to participate in recruitment and assessment processes for Fellowships at Oriel and other Oriel College appointments; Refuse to attend or speak at talks, seminars, and conferences sponsored by Oriel.”

Over the years many Indians have studied at Oriel – for example, the late Ajit Nath Ray, who was the Chief Justice of India (1973–7).

He read modern history at Oxford.