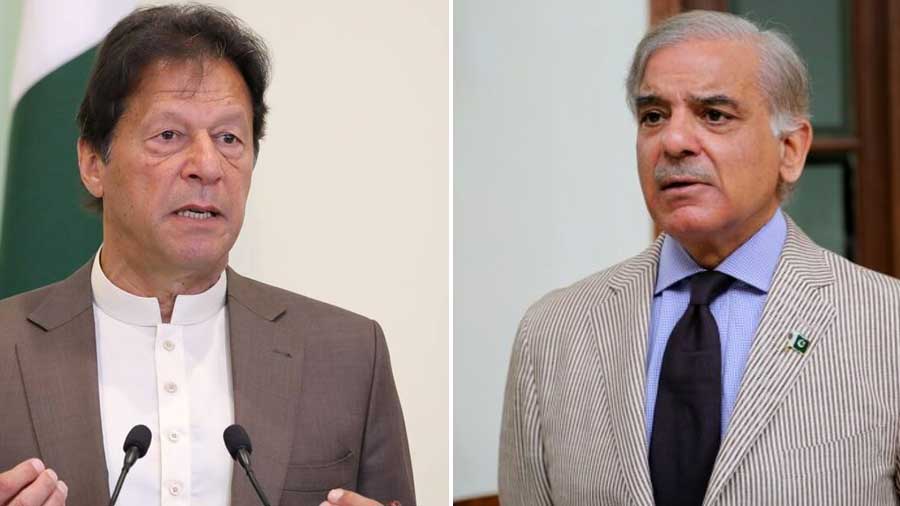 A defiant former prime minister Imran Khan on Wednesday rejected reports about any deal with the government on his protest march, saying the rally would go ahead followed by a sit-in Islamabad until new elections were announced by the Pakistani authorities.

"Rumours and deliberate disinformation that a deal has been done. Absolutely not! We are moving towards Islamabad & no question of any deal. We will remain in Islamabad till announcement of dates for dissolution of assemblies & elections are given. Calling all people of Islamabad & Rawalpindi to join," the 69-year-old cricketer-turned politician tweeted.

Rumours & delib disinfo that a deal has been done. Absolutely not! We are moving towards Islamabad & no question of any deal. We will remain in Islamabad till announcement of dates for dissolution of assemblies & elections are given. Calling all ppl of Islamabad & Pindi to join

His statement came after Dunya News channel reported that the government has struck a deal with Khan to peacefully hold his party's "Azadi March" in Islamabad at the mediation of the powerful army, amid clashes between police and his supporters after authorities blocked off major roads to the capital using dozens of shipping containers and trucks.

The ruling Pakistan Muslim League-Nawaz party's vice president Maryam Nawaz also rejected the report about any deal with Khan's party. She responded to a tweet by a journalist that PTI leaders offered to call off their protest if they were allowed to hold a rally in Islamabad.

"This is correct. They were looking for a safe exit for the two days after seeing that the march was failing. Today, when the Long March failed miserably, they proposed a rally instead of a sit-in," she tweeted.

She went on to add: "The government has refused to accede to any of Imran Khan's proposals."

It was agreed in the talks, which began at 10 am and went on until 1.30 pm, that the PTI would be allowed to hold the rally in Islamabad and its supporters would return after demonstrating peacefully, the channel reported, citing its sources.

The powerful Pakistan Army, which has ruled the coup-prone country for more than half of its nearly 75 years of existence, has hitherto wielded considerable power in the matters of security and foreign policy.

Khan, who was ousted from power last month through a no-trust vote, had apparently lost support of the Army after he refused to endorse the appointment of the ISI spy agency chief last year.

He has been claiming that the no-trust motion against him was the result of a foreign conspiracy because of his independent foreign policy and funds were being channelled from abroad to oust him from power. He has named the US as the country behind the conspiracy, a charge denied by Washington.

Khan, accompanied by hundreds of his supporters, has been leading the march mounting on a truck.

Addressing his supporters at Swabi interchange on M-2 Motorway in Khyber-Pakhtunkhwa, Khan said the "thieves and the servants of America were ruling in Islamabad".

He urged his supporters to remain "peaceful", and said the march would go ahead as per plan to hold the rally at the D-Chowk in Islamabad, which is located close to several important government buildings: the Presidency, the Prime Minister's office, the Parliament, and the Supreme Court.

Meanwhile, the Supreme Court has directed the authorities to provide an alternate place to Khan's party for their protest so that they can demonstrate and then go home.

The court ordered that the ground between G-9 and H-9 Sectors of the capital should be provide for the purpose of rally by the PTI. It also ordered to set up a bipartisan committee of the government and PTI to settle the term and conditions for holding the rally in a peaceful manner.

"Let them protest and then go home," Justice Ahsan said.

Authorities have blocked major roads leading to Islamabad using dozens of shipping containers and trucks and arrested several supporters of Khan in a bid to derail the protest march.

The government on Tuesday banned the PTI rally to prevent Khan's supporters from "propagating their misleading agenda".

Prime Minister Shehbaz Sharif's coalition government initially allowed the protest, but on Tuesday refused to give permission, fearing violence and lawlessness in the wake of the march.

On Wednesday, a crackdown started in various cities and police arrested hundreds of PTI workers and some of its leaders to stop them from joining the protest known as Azadi March . TV channels showed the police firing teargas and beating Khan's supporters at some places in Punjab province.

The government also imposed Section 144 to ban big gatherings in Punjab's capital Lahore, the twin cities of Rawalpindi and Islamabad, and Karachi, as well as other major cities.