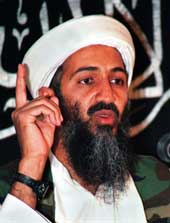 His youngest wife was also arrested after a gun battle at her father’s compound in Yemen. Amal al-Saddah, Laden’s fifth and favourite wife, who is in her early twenties, has been placed under house arrest and questioned by Yemeni authorities, The Sunday Times reported.