February list focuses on ten most urgent cases of reporters covering conflict, who have been killed, attacked, or have gone missing 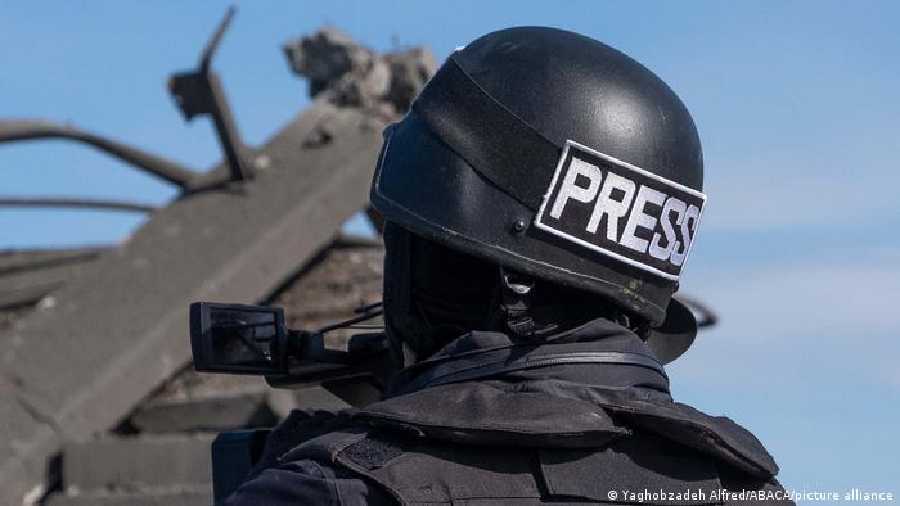 This month’s “10 Most Urgent” list from the One Free Press Coalition features journalists covering the war in Ukraine. Following Russia’s invasion of Ukraine, millions of people are fleeing, hundreds are dying, and journalists are risking their lives to present the facts and the human toll of this incursion. Five journalists have been killed, while others have been attacked or have gone missing. The war has also devastated independent journalism in Russia. Recently, Russian President Vladimir Putin signed a law that criminalizes factual news reporting. Hundreds of independent Russian journalists have fled—but there are no guarantees for safe refuge, and many lack visas and resources to continue reporting in exile.

1. Oleksandr Gunko (Ukraine)
On April 3, Russian soldiers in the southeastern Ukrainian city of Nova Kakhovka searched Oleksandr Gunko’s home, seized his phones and electronic devices, and took him to an undisclosed location. Gunko is a poet and the chief editor of the Nova Kakhovka City news website, which has covered rallies in the city against the Russian invasion.

2. Sota.Vision (Russia)
Journalists at Russian independent news outlet detained, arrested, fined and charged. Since March 7, authorities have detained at least seven journalists with independent news website Sota.Vision, including two who were sentenced to multiple days in prison. Authorities also fined and harassed employees of the outlet and seized their technical equipment for coverage of rallies and anti-war protests.

3. Iryna Dubchenko (Ukraine)
Journalist abducted at her home and held in custody of Russian forces. On March 26, Russian forces detained Iryna Dubchenko and searched her home saying they knew about her “journalistic activities.” They accused her of hiding a wounded Ukrainian soldier and took her to Donetsk for “investigative action,” according to Dubchenko’s sister and 1+1 correspondent Yakiv Noskov. On March 29, the Zaporizhzhia region of the Ukrainian military administration confirmed the journalist’s abduction and said that “response measures are being taken.”

4. Ivan Safronov (Russia)
Trial scheduled for Russian journalist accused of high treason. Trial is set to begin in early April for Ivan Safronov, a former reporter for the Russian dailies Kommersant and Vedomosti, who was detained in July 2020 by Russian Federal Security Service officers in connection with his reporting. He was charged with high treason for allegedly spying for a foreign country. His attorney told CPJ that agents interrogated Safronov about his March 2019 report on Russia’s alleged sale of jet fighters to Egypt. Safronov has denied the allegations of high treason, according to the attorney. If convicted, Safronov could face up to 20 years in prison, according to the Russian penal code. In July 2020, at least 18 journalists demonstrating support of Safronov were detained.

Russia accuses yet another journalist of 'treason'

5. Remzi Bekirov (Crimea, Ukraine)
Crimean Tatar correspondent sentenced to 19 years in prison. On March 10, a Russian court sentenced Remzi Bekirov, a correspondent for the independent news website Grani, to 19 years in prison for allegedly organizing the activities of a terrorist organization, a charge Bekirov denied. Bekirov, who is an ethnic Crimean Tatar, live-streamed from Russian authorities’ raids and trials of Crimean Tatars and also interviewed activists with the human rights group Crimean Solidarity. Russia has enforced its laws in Crimea since it annexed the peninsula from Ukraine in March 2014, including imposing substantial restrictions on media freedom.

6. Viktoria Roshchina (Ukraine)
Reporter held hostage for ten days by Russian forces. Viktoria Roschina, a reporter with the independent Ukrainian television station Hromadske, was first reported missing on March 11 while on her way to the southeastern city of Mariupol. Her employer reported that Russian forces took her hostage. Roshchina was released ten days later. According to Hromadske, Russian “occupiers” forced her to record a video later posted on pro-Russian media and social media outlets in which she was forced to deny being held by Russian forces. Roshchina covered the Russian invasion in eastern and southern Ukraine. She is now in the territory controlled by Ukrainian forces.

7. Taisia Bekbulatova (Russia)
Independent news editor has worked to evacuate her Russia-based staff. Once Russia passed legislation threatening up to 15 years in prison for the publication of “fake” information about the invasion of Ukraine, Taisia Bekbulatova, the chief editor of Russian independent news site Holod, began frantically looking for ways to evacuate her Russia-based staff. Bekbulatova had relocated to Tbilisi, Georgia, at the end of last year after she was declared a “foreign agent” by Russia’s justice ministry. Bekbulatova considers Georgia only a stopover and notes it’s “not the safest country for independent journalists because the current government is trying to avoid unnecessary conflict with Putin.”

9. Vladislav Yesypenko (Crimea, Ukraine)
Crimean journalist sentenced to six-year prison term. In February, a court in Russian-occupied Crimea convicted Vladislav Yesypenko, a correspondent with the U.S. Congress-funded broadcaster Radio Free Europe/Radio Liberty, on charges of possessing and transporting explosives, and sentenced him to six years in prison. Yesypenko maintained his innocence throughout the closed-door trial and testified that authorities “want to discredit the work of freelance journalists who really want to show the things that really happen in Crimea,” according to news reports.

10. Rodion Severyanov (Russia)
Russian war correspondent shot and wounded in Ukraine. On March 29, war correspondent for the Russian pro-government broadcaster Izvestiya TV, Rodion Severyanov, who was embedded with the Russian forces, was wounded in the leg in the southeast Ukrainian city of Mariupol. He said he was shot while trying to help a wounded Russian soldier. In an interview, Severyanov said a Ukrainian sniper had shot him; however, CPJ was unable to independently verify the source of fire.

The One Free Press Coalition uses the collective audiences of member organizations like DW, Washington Post, Reuters, and AP to stand up for journalists under attack to pursue their work worldwide. The Coalition conceives and shares a list each month, highlighting journalists who are incarcerated, under threat, or facing injustice.