Oli not to quit, will let Parliament decide his fate: aide 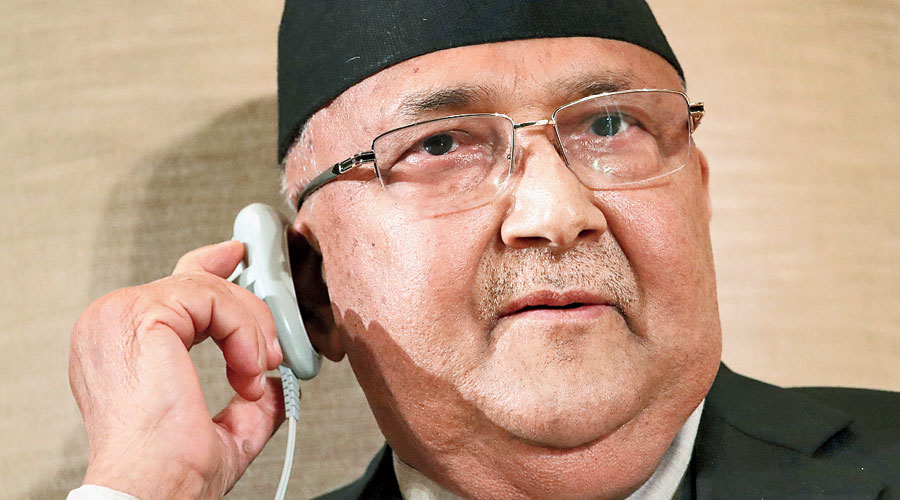 Nepal’s Prime Minister K.P. Sharma Oli will not resign but let parliament decide his fate instead, an aide said on Wednesday a day after the Supreme Court rejected his decision to dissolve the legislature and call early election.

Nepal has been in political turmoil since December, when Oli suddenly dissolved parliament and announced elections, citing a lack of cooperation on key policy issues by leaders of a rival faction of his ruling party. Oli, 69, has begun meeting allies in the Nepal Communist Party (NCP) to review the situation after the court held parliament’s abrupt dissolution unconstitutional and ordered it to be called into session before March 8.

“The Prime Minister will not resign now. There is no question about that,” Surya Thapa, the aide, said.

“He will face parliament,” Thapa added, but did not elaborate.

Thousands of anti-Oli supporters waved red and white flags bearing the communist hammer and sickle as they took to the streets in the capital, Kathmandu, for a rally to celebrate the court decision and press the Prime Minister to resign.

“Oli should pack up his bags and go to Balkot,” said 25-year-old Purna Khadka, a protester whose face was painted in the colours of the party flag, referring to the site of the Prime Minister’s home. Members of the anti-Oli faction said they rejected his autocratic style of functioning and the latest court order proved his inability to govern. Lawmakers opposed to the Prime Minister are holding talks to decide their next move, said Narayan Kaji Shrestha, a senior NCP leader who organised nationwide protests against Oli in the past few months. Analysts said a power struggle was imminent among Nepal’s communist leaders and uncertainty could last for weeks.

“The political flux will finally reach a climax with a change of Prime Minister,” said Krishna Pokharel, a professor of political science at Kathmandu’s Tribhuvan University.

“The Supreme Court’s verdict is controversial, however, it should be accepted and implemented. Its effects will be seen in the future as the decision has not provided any solution to the political problems,” Thapa said.

He claimed that the apex court's verdict will further fuel instability and pave the way for power play.

Oli’s chief adviser Bishnu Rimal, mirroring Thapa’s sentiments, said that all will have to accept the court’s decision. “However, it provides no solution to existing political complications,” Rimal said.

A large section of the Nepali media welcomed the Supreme Court’s verdict that reinstated the dissolved House of Representatives. They hailed the decision, saying it has upheld democratic values and safeguarded the Constitution.

“By passing a judgment, the Supreme Court has once again stood by the people, and re-established the notion of an independent judiciary,” wrote The Kathmandu Post in its editorial.”

“Now the House has been reinstated and the politics will return to parliament, the problems are not yet over. There are too many players in the House with no one controlling the majority and the risk of the dirty game of horse-trading could start soon,” the daily warned.

The Naya Patrika termed the ruling a “defeat for an autocratic ruler” and a “victory for democracy and a challenge for the future”. “If both the factions of the Communist Party of Nepal could utilise the opportunity created by the House reinstatement in a constructive way, it would benefit all the party, the cadres and leaders of the party as well as the entire nation,” the Annapurna Post said in its editorial.

“One should use conscience so that the country would not plunge into another political crisis and confrontation,” it said.