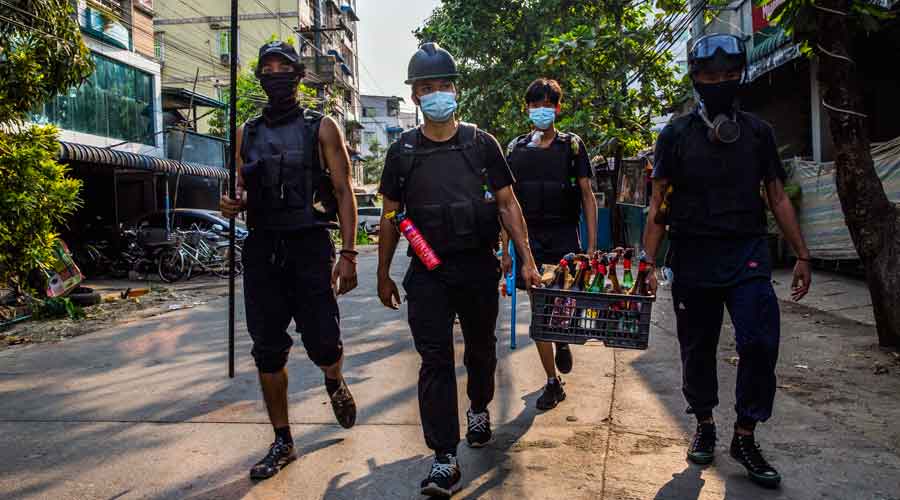 Myanmar’s ruling military junta warned on Friday that pro-democracy protesters risked being shot in the head or back as activists called for a huge show of defiance against the generals on the country’s Armed Forces Day on Saturday.

Troops killed four more people in demonstrations on Friday, adding to a reported death toll of more than 320 people in the crackdown that has followed the coup against Aung San Suu Kyi’s elected government on February 1.

A broadcast on the state MRTV news channel said: “You should learn from the tragedy of earlier ugly deaths that you can be in danger of getting shot to the head and back”.

The warning did not specifically say that security forces had been given shoot-to-kill orders, and the junta has previously tried to suggest that some fatal shootings have come from within the crowds of protesters.

But it indicated that the military was determined to prevent any disruptions around Armed Forces Day.

And in a week that saw international pressure on the junta ramped up with new US and European sanctions, Russia offered support for the military and said it wanted to strengthen ties.

Protesters have taken to the streets almost daily since the coup which derailed Myanmar’s slow transition to democracy.

Demonstrations took place across the country again overnight and on Friday, including in Mandalay and Sagaing regions, as well as Karen and Chin states, media reports said

“Two were killed by head shots,” the witness told Reuters. “We cannot pick up the (third) dead body as many security forces are there”.

Another witness said he had seen a fourth body. Myanmar Now news said four people were killed in the town.

At least 320 protesters have been killed in the weeks of unrest as of Thursday night, according to figures from the Assistance Association for Political Prisoners (AAPP) activist group.

Its data shows that at least 25 per cent of those died from shots to the head, raising suspicions they were deliberately targeted for killing.

Reuters could not independently verify the numbers killed.

A military spokesman did not respond to calls seeking comment.

The UN special envoy on Myanmar, Christine Schraner Burgener, said the military had turned against its own citizens. “Women, youth and children have been among those killed,” she said in a statement.

US ambassador Thomas Vajda and his wife placed a wreath in front of a school in the commercial capital Yangon where a protester was shot and killed last month.

“We honour the memory of all those who have lost their lives since the February 1 coup,” the embassy said in a Twitter post.

Half an hour later, troops took the wreath away, witnesses said.

In Mandalay, groups of monks wearing robes and anti-coronavirus facemasks held candles and stood in a protest vigil outside the Moe Kaung and Masoeyain monasteries after dark.

About 100 people beating drums held a protest in the downtown Sule area of Yangon before being chased away by security forces, witnesses said.

Organisers have called for widespread protests on Saturday, observed as Armed Forces Day and commemorating the start of the military’s resistance to Japanese occupation in 1945.  Authorities freed about 300 protesters on Friday.