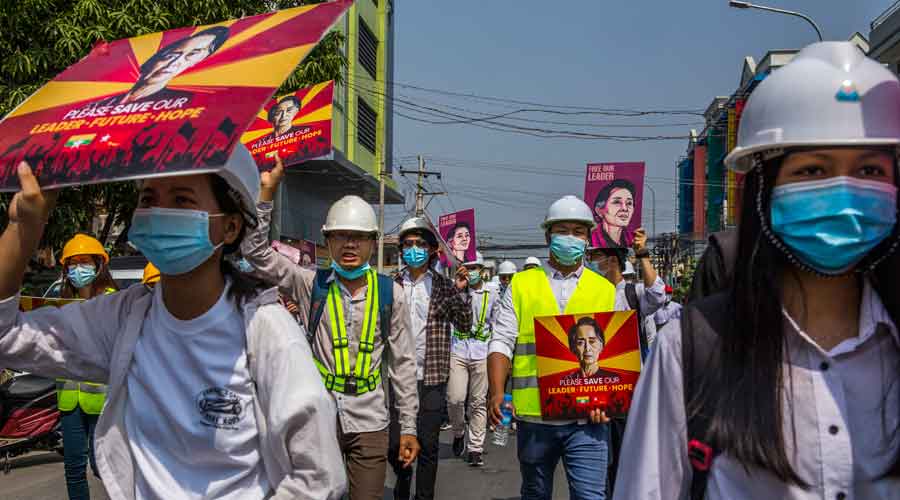 Police dispersed protesters in Myanmar’s two biggest cities on Friday, firing stun grenades, rubber bullets and guns into the air in a crackdown on weeks of demonstrations that have challenged the army’s bid to re-impose its rule.

At least one person was wounded in the protests in the main city of Yangon, a witness said, and several people were hurt in the second city of Mandalay.

The southeast Asian country has been in crisis since the army seized power on February 1 and detained government leader Aung San Suu Kyi and much of her party leadership after the military complained of fraud in a November election her party won. The election commission said the vote was fair.

Suu Kyi had been moved this week from house arrest in the capital Naypyitaw to an undisclosed location, the Myanmar Now website said, quoting officials of her National League for Democracy (NLD) party.

A lawyer for Suu Kyi said he had been told the same by NLD officials. He earlier complained that he had been given no access ahead of a court appearance set for March 1.

There have been daily protests and strikes by democracy supporters for about three weeks, often drawing hundreds of thousands of people across the ethnically diverse country.

In Yangon, hundreds of people congregated again in several groups, chanting slogans. Riot police rushed at them, firing stun grenades and guns into the air to send people scattering.

“One house let me in to hide,” a journalist told Reuters from the scene. “I can’t leave yet as the police are very near and firing into the air.”

Several people were detained, witnesses said, among them a Japanese journalist who was held briefly.

Domestic media and witnesses reported a similar confrontation in Mandalay where police also fired rubber bullets. An emergency service worker said children were hurt there and media published pictures of two with minor injuries as well as of one man with a bloody leg wound. It was not clear how they were hurt.

Police also broke up protests in the capital, Naypyitaw, the central town of Magwe and in the western hill town of Hakha, according to witnesses and social media posts.

Security forces have been more restrained than they were during earlier bouts of protest in the course of nearly half a century of military rule.

Suu Kyi, 75, has been detained incommunicado in Naypyitaw since the coup.

The Myanmar Now website said she had been moved from her home in the capital, quoting a senior NLD source as saying: “We don’t know where she’s being kept anymore.”

A lawyer for her, Khin Maung Zaw, told Reuters he had heard the same from NLD officials but could not confirm it. Authorities did not respond to Reuters requests for comment.

Khin Maung Zaw earlier complained he was not able to prepare properly for her next hearing, on Monday, because he had no access.

“I need instructions from her on how to conduct our defence at the court ... I’m concerned that there will be a loss of rights to access to justice and access to legal counsel,” he said.

Protesters say her party’s election victory must be respected.

But the military replaced the election commission’s top officials and its new chairman, citing fraud and voter-list errors, said on Friday the polls had been annulled, the Irrawaddy online media outlet reported.

The NLD said in a statement the ruling was an insult to voters and the military did not have the authority to appoint a new election commission.