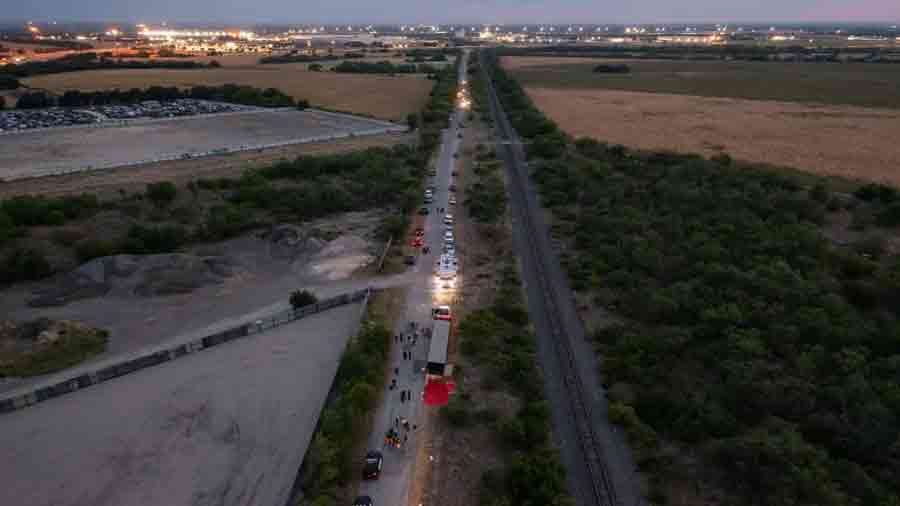 The bodies of at least 46 people believed to be migrants who crossed into the US from Mexico were found dead on Monday in and around a tractor-trailer that had been abandoned on the outskirts of San Antonio, state and city officials said. At least 16 others, including children, were taken to local hospitals alive but suffering from heat exhaustion and apparent dehydration, city officials said during a news conference at the scene of what appeared to be one of the worst episodes of migrant death in the United States in recent years.

“The plight of migrants seeking refuge is always a humanitarian crisis,” mayor Ron Nirenberg of San Antonio told reporters late Monday. “But tonight we are dealing with a horrific human tragedy.”

The chief of the San Antonio Police Department, William McManus, said three people had been taken into custody. Earlier in the day, officers had been searching for the driver of the vehicle, who appeared to have abandoned the truck sometime before it was discovered in a remote area near railroad tracks and auto salvage yards southwest of downtown.

Chief McManus did not say if the driver was among those detained. The truck was discovered by a worker from a nearby business who “heard a cry for help and came out to investigate”, said Chief McManus, adding that the worker had found the doors of the trailer partially open and found a number of bodies inside. Most of the bodies, which included men and women, were found inside the truck at around 6pm (local time), though at least one was outside of the vehicle.

The fire chief, Charles Hood, said the people who were transported to hospitals were “hot to the touch” and appeared to be suffering from “heat stroke, heat exhaustion”. The truck, though designed to be refrigerated, had “no visible, working A/C unit”, he said. State officials in Texas, already managing record levels of migrant crossings from Mexico, have been bracing for a new surge this spring and summer. All the victims are believed to have crossed into the US illegally and been brought north. The closest border crossing is roughly 140miles away.

“These deaths are on Biden,” governor Greg Abbott, a Republican, said in a short statement on Twitter. “They are a result of his deadly open border policies. They show the deadly consequences of his refusal to enforce the law.” Officials did not say how the people had died but suggested that the extreme health been a cause. San Antonio and other cities across Texas have been experiencing heat in June that is at or near record levels. The temperature on Monday in the city had topped 37 degrees Celsius.

“Imagine being abandoned inside an 18-wheeler left to die,” Representative TonyGonzales, whose congressional district stretches from the outskirts of San Antonio to the border, wrote on Twitter. “Will@AliMayorkas even mention their names?” he added, referring to Alejandro Mayorkas, the secretary of homeland security. A spokesman for the Texas state police referred questions to the San Antonio Police Department. The Department of homeland Security was expected to take over the investigation.  The federal agency said in a statement that it was working with state and local authorities to investigate the deaths.