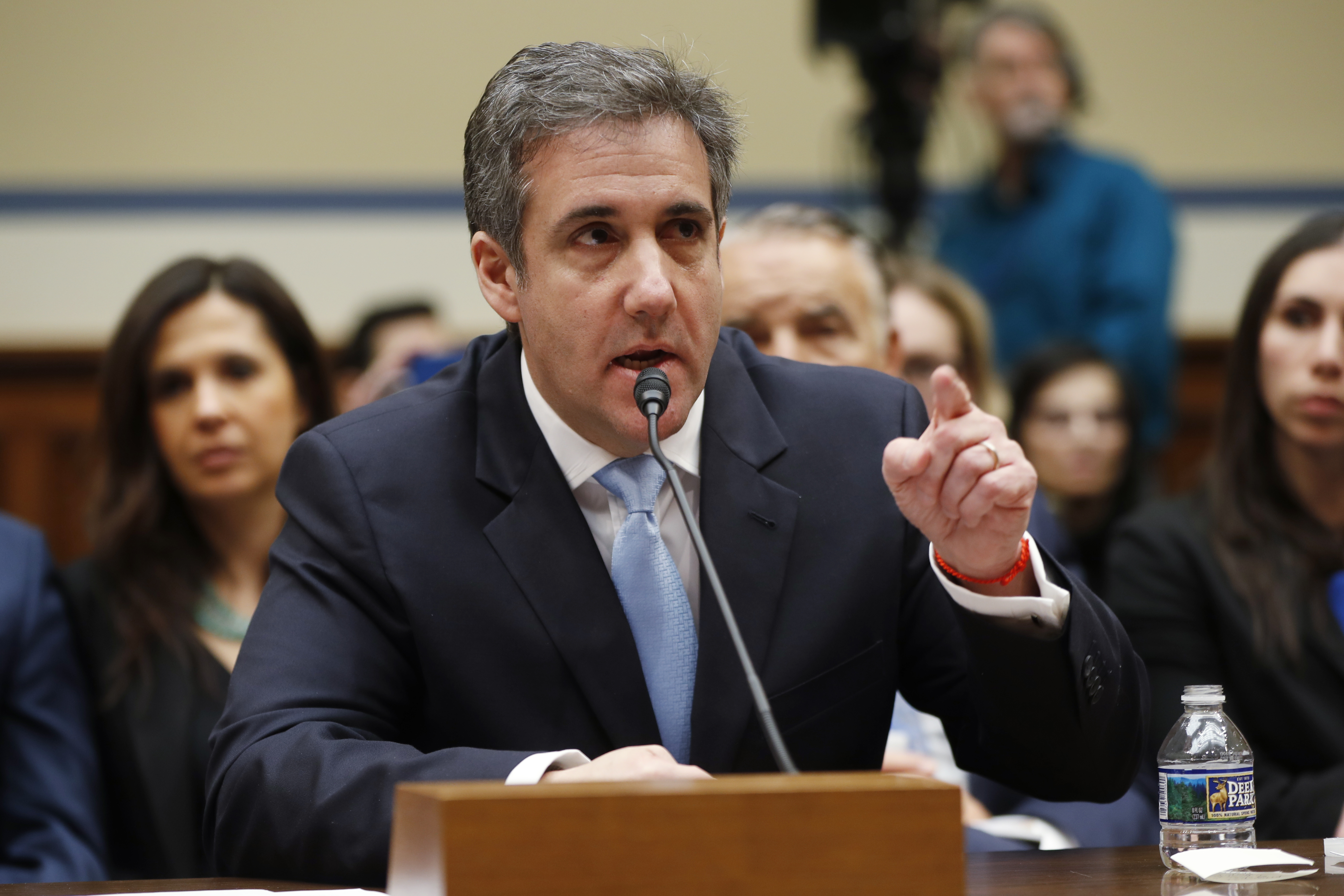 Shaking off criticism from House Republicans, President Donald Trump's former personal lawyer declared under oath Wednesday that Trump knew ahead of time and embraced the news when told that WikiLeaks had emails damaging to Hillary Clinton's presidential campaign. Michael Cohen also testified that Trump is a 'racist,' a 'conman' and a 'cheat.'

Cohen, called to testify by Democrats over the objections of Republicans, suggested that Trump also implicitly told him to lie about a Moscow real estate project. Cohen has pleaded guilty to lying to Congress about the project, which he says Trump knew about as Cohen was negotiating with Russia during the 2016 election campaign.

The hearing was producing the most damning depiction to date of Trump's campaign and business operations from a onetime member of his inner circle. It was the latest step in Cohen's evolution from legal fixer for the president — he once boasted he'd 'take a bullet' for Trump — to a foe who has implicated him in federal campaign finance violations.

'I am ashamed of my weakness and misplaced loyalty, of the things I did for Mr. Trump in an effort to protect and promote him,' Cohen said. 'I am ashamed that I chose to take part in concealing Mr. Trump's illicit acts rather than listening to my own conscience. I am ashamed because I know what Mr. Trump is.'

Democrats asked Cohen about details of his accusations against Trump, while Republicans on the House Oversight and Reform Committee focused on assailing him and his credibility.

Accused at length by one GOP lawmaker of being a pathological liar, Cohen responded, 'Sir, are you referring to me or the president?'

On a more substantive matter, Cohen said at one point that prosecutors in New York are investigating conversations Trump or his advisers had with him after his hotel room was raided for documents by the FBI.

He was asked by a Democratic congressman about the last contact he had had with Trump or any agent representing the president.

Cohen said that happened about two months after his hotel room was raided by the FBI in April 2018. But he declined to provide more specific details and said the matter was being investigated by federal prosecutors.

As for the Clinton emails, Cohen's claims that Trump had advance knowledge about the WikiLeaks release contradict the president's assertions that he was in the dark, but it was not clear what evidence Cohen had to support the allegation or even how legally problematic it would be for Trump. Special counsel Robert Mueller has not suggested that mere awareness of WikiLeaks' plans, as Trump confidant Roger Stone is purported to have had, is by itself a crime.

Underscoring the deeply partisan nature of the proceedings, Democrats on the committee lifted an earlier restriction that the hearing not delve into Russia, while Republicans tried unsuccessfully to block the hearing as it got underway, on grounds that Cohen had not provided his opening statement long enough in advance.

The committee's top Republican, Representative Jim Jordan, of Ohio, sought early on to undermine Cohen's credibility by calling him a 'fraudster, cheat' and 'a convicted felon.'

'Certainly it's the first time a convicted perjurer has been brought back to be a star witness at a hearing,' Jordan said.

Cohen said Trump did not directly tell him to lie, but 'he would look me in the eye and tell me there's no business in Russia and then go out and lie to the American people by saying the same thing.'

Cohen said that 'in his way, he was telling me to lie.' He added that lawyers for Trump had 'reviewed and edited' the statement in which Cohen falsely said a proposal for a Trump Tower in Moscow had been abandoned in January 2016. Cohen has since said he continued pursuing the project for Trump for months after that.

Trump, at a Vietnam hotel before a planned meeting with North Korean leader Kim Jong Un and unable to ignore the drama playing out thousands of miles away, lashed out at Cohen on Twitter, saying his lawyer 'did bad things unrelated to Trump' and 'is lying in order to reduce his prison time.'

A judge already has set Cohen's sentence, and Cohen's cooperation will have no bearing on that term. Cohen, ahead of his appearance, said Tuesday that the American people could decide 'exactly who is telling the truth' when he testified before the House committee.

On WikiLeaks, Cohen said in the prepared testimony that he was in Trump's office in July 2016 when longtime adviser Roger Stone telephoned Trump. Trump put Stone on speakerphone and Stone told him that he had communicated with WikiLeaks founder Julian Assange and that 'within a couple of days, there would be a massive dump of emails that would damage Hillary Clinton's campaign,' according to Cohen.

Trump responded by saying 'wouldn't that be great,' Cohen said.

'A lot of people have asked me about whether Mr. Trump knew about the release of the hacked Democratic National Committee emails ahead of time,' Cohen said in the prepared testimony. 'The answer is yes.'

Cohen said he does not have direct evidence that Trump colluded with the Russian government during the election, but that he has 'suspicions.' Of a meeting in Trump Tower between campaign advisers, including Trump's oldest son, and a Russian lawyer, Cohen said that Trump had frequently told him that Donald Trump Jr. 'had the worst judgment of anyone in the world' and he 'would never set up any meeting of any significance alone — and certainly not without checking with his father.'

Cohen, once Trump's loyal attorney, has turned on his former boss and cooperated with Mueller's Russia investigation. He begins a three-year prison sentence in May after pleading guilty to lying to Congress in 2017 and committing campaign finance violations while working for Trump.

He met with the Senate intelligence committee for more than nine hours behind closed doors on Tuesday. Cohen said afterward that he appreciated the opportunity to 'clear the record and tell the truth' to the panel after acknowledging he lied to the committee in 2017.

It was the first of three days of congressional appearances for Cohen. After the public hearing, he will appear privately before the House intelligence panel Thursday.

Republicans were expected to aggressively attempt to discredit Cohen, given that he has acknowledged lying previously. White House spokeswoman Sarah Sanders said Tuesday it was 'laughable that anyone would take a convicted liar like Cohen at his word, and pathetic to see him given yet another opportunity to spread his lies.'

One Republican House member did more than just question Cohen's credibility. Florida Republican Matt Gaetz tweeted Tuesday that the world is 'about to learn a lot' about Cohen and suggested he knew of disparaging information that could come out during the hearing. Gaetz later apologized and said he was deleting the tweet.

Gaetz, a Trump ally who talks to the president frequently, is not a member of the committee that was questioning Cohen.

Democrats have been alternately suspicious of Cohen and eager to hear what he has to say. Senator Mark Warner, the intelligence panel's top Democrat, suggested after Tuesday's interview that Cohen had provided important information.

'Two years ago when this investigation started I said it may be the most important thing I am involved in in my public life in the Senate, and nothing I've heard today dissuades me from that view,' Warner said.

In addition to lying to Congress, Cohen pleaded guilty last year to campaign finance violations for his involvement in payments to two women who allege they had affairs with Trump.

Cohen also said he will present the committee with a copy of the check Trump wrote from his personal bank account after he became president to reimburse him for the hush money payments. He claimed he has other exhibits as well, including some financial statements.

On the matter of racism, Cohen said the president made racist comments 'disparaging African-Americans, saying at one point that black people would never vote for him because they were too stupid.'

Why Michael Cohen, Trump’s fixer, confessed to it all