Macron's plea for Europe lays down battle lines for May vote

The European Commission welcomed Macron's plea, though it claims to have been working for years on his ideas 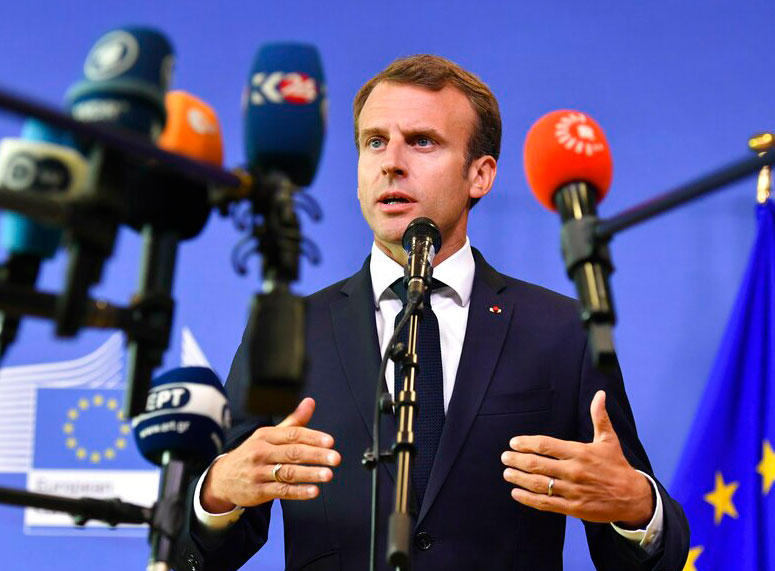 French President Emmanuel Macron drew both support and scepticism Tuesday with a clarion call to voters in 28 nations to choose a stronger European Union and reject populists, amid concerns that eurosceptics could reach unprecedented success in upcoming European Parliament elections.

In a column published for Tuesday's editions throughout the bloc, Macron advised voters in the May 23-26 EU parliament elections to reject nationalist parties that 'offer nothing,' laying down the battle lines for the vote.

Instead, he called on people to support parties who want to strengthen Europe.

Macron himself defeated an anti-EU candidate to become modern France's youngest leader, but his popularity at home has dipped since taking office to the strains of the bloc's anthem, 'Ode to Joy.'

The column is his furthest-reaching attempt to shore up the EU, where nationalist and populist candidates have seen gains, including in neighbouring Italy and most recently in the Estonia general election on Sunday.

'Never has Europe been in so much danger,' he wrote. He called Brexit a symbol of the crisis plaguing Europe — a 'trap' of lies and irresponsibility backed by fake news.

'Freedom, protection and progress: we need to build European renewal on these pillars. We can't let nationalists with no solutions exploit people's anger. We can't sleepwalk to a diminished Europe. We can't remain in the routine of business as usual and wishful thinking,' he wrote.

He proposed the creation of an agency to protect member states' elections from cyber attacks and other manipulations. He also seeks to ban the financing of EU political parties by foreign powers.

Macron also called for Europe to lead the fight against climate change by setting a target of zero carbon dioxide emissions by 2050 and cutting pesticide use in half by 2025.

Macron's office said the French president' approach is 'legitimate and useful' in opening a European debate without interfering in domestic politics. It added that the French presidency had informed all 28 EU governments ahead of the publication.

The European Commission welcomed Macron's appeal, though it says it has already been working for years on many of the ideas he raised —ranging from border guard and asylum agencies to security and food safety proposals or tackling climate change.

Olaf Scholz, Germany's vice chancellor and finance minister, praised Macron for sending 'a determined signal for cohesion in Europe.' He told the Funke newspaper that Europe needs to be strong to avoid being pushed around.

In a tweet Tuesday, Finnish Prime Minister Juha Sipila offered support for Macron's call for 'security, sustainable growth and ambitious climate policy.' Sipila added that people needed to see 'the EU that is capable of making decisions and implementing them.'

Belgian Prime Minister Charles Michel said he particularly hoped for 'a Europe that protects liberty and democracy,' according to the agency Belga.

But Czech Prime Minister Andrej Babis, Babis, a populist billionaire, appeared sceptical of Macron's plea. 'I don't think it goes in the right direction,' he told The Associated Press, adding that he believed the EU should focus on issues such as defence and making the bloc's common trading market work better.

In France, Macron's ratings remain low in popularity polls even if he appeared to regain a little support in recent weeks, as he tries to quell the yellow vest anti-government protest movement.

The polls suggest that Macron's party appears ahead of the far-right National rally in European Parliament elections.

Since he arrived in office in May 2017, Macron has made a point of visiting 19 European countries.

But that did not prevent tensions from breaking out between France and nations where populist parties govern, from Poland and Hungary to Italy.

In October, Macron harshly accused Hungarian and Polish leaders of 'lying' to their people about the EU.

The Hungarian government of President Viktor Orban said Tuesday: 'Macron is a pro-immigration politician, who believes immigration is good. We believe it is bad.

'In truth, Macron wants to attack those who are against immigration. That's what this program is about,' a written statement said.

Italy's anti-migrant Interior minister Matteo Salvini has repeatedly criticized Macron and said he hoped the French would not back him in upcoming elections.