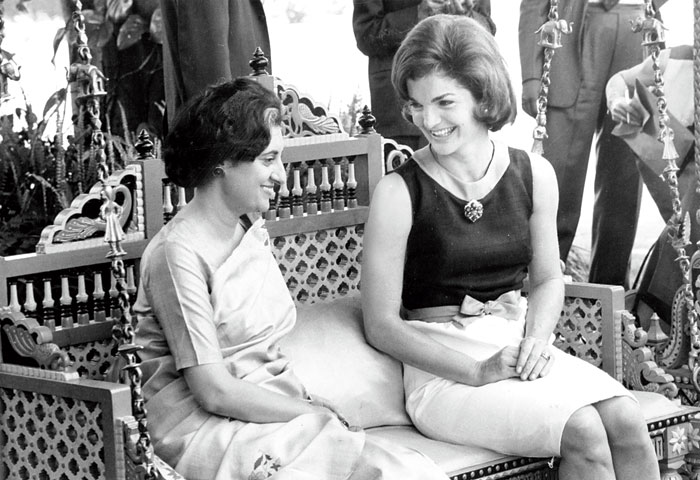 A photographic album containing 89 black and white and colour pictures of former US First Lady Jacqueline Kennedy during a trip to India in March 1962 was sold at an auction at Christie’s in New York on Thursday for $50,000.

The album, a gift from the Indian government which treated the trip almost like a state visit, belonged to Lee Bouvier Radziwill, who accompanied her elder sister to India.

There are photographs of the two sisters with Jawaharlal Nehru and Rajendra Prasad, then India’s Prime Minister and President respectively. There is a photograph of Kennedy with an equally elegant Indira Gandhi, who was then 45 and would succeed her father as Prime Minister in 1966.

Kennedy (née Bouvier) was regarded as the most famous woman in the world at the time and the two sisters as glamorous style icons. The US First Lady, who was 32, wore 22 outfits in nine days.

In a LIFE article from the time, correspondent Anne Chamberlin remarked on Kennedy’s exemplary outfit choices during the India trip. She “wore a perpetual grin and a dazzling collection of clothes that were both perfect and simple”, the journalist wrote.

Of her trip, which involved receptions with international diplomats, meetings with ambassadors, as well as polo matches, boat trips, elephant rides, Kennedy simply stated that “it’s been a dream”.

The evocative photographs recall a very different India. Radziwill said she had found Nehru to be “the most fascinating, gentle and sensual men I ever met”.

In America, “Camelot” ended abruptly on November 22, 1963, when President Kennedy was assassinated in Dallas. Kennedy, whose second husband was the Greek shipping tycoon, Aristotle Onassis, died on May 19, 1994, aged 64.

Radziwill died on February 15 this year at the age of 85 and the album is among her possessions which have been auctioned in 168 lots for a total of $1,266,000.

Jonathan Rendell, deputy chairman of Christie’s, said afterwards: “The sale was a tribute to the transcendent taste and exquisite eye of the late Lee Bouvier Radziwill and her fascinating position at the centre of American society, both political and artistic over the last century.”

According to one newspaper report, “Lee Radziwill was renowned not just for being Jacqueline Kennedy’s sister, but also for her exquisite, and expensive, taste.”

Radziwill once said: “If I really can be said to have a personal style, I think it is reflected in my taste for the exotic and the unexpected. I like to create rooms which are essentially traditional—and then add touches of the bizarre and the delicious.”

Her second husband Prince Stanislaw Radziwill, who was from a Polish noble family, had quipped: “It is fantastic how much she costs to dress.”

Ahead of the auction, Christie’s pointed out: “The contents of the collection offer a glimpse into Radziwill’s fascinating life, spanning her years as a prominent socialite, princess, designer, and witness to a momentous era in American history.

“Throughout her life, she developed friendships with many cultural figures of the 20th century such as Truman Capote, Andy Warhol, Peter Beard, Giorgio Armani, Rudolf Nureyev, Marc Jacobs, Sofia Coppola, The Rolling Stones and others, and was often cited as a muse. Her influential connections are reflected through her legendary interiors, on which she collaborated closely with Renzo Mongiardino. Fine and decorative art from her homes in Paris and New York feature prominently in the collection, as well as books, costume jewellery, photography and memorabilia.”