Jacinda sold a lockdown with straight talk and mom jokes 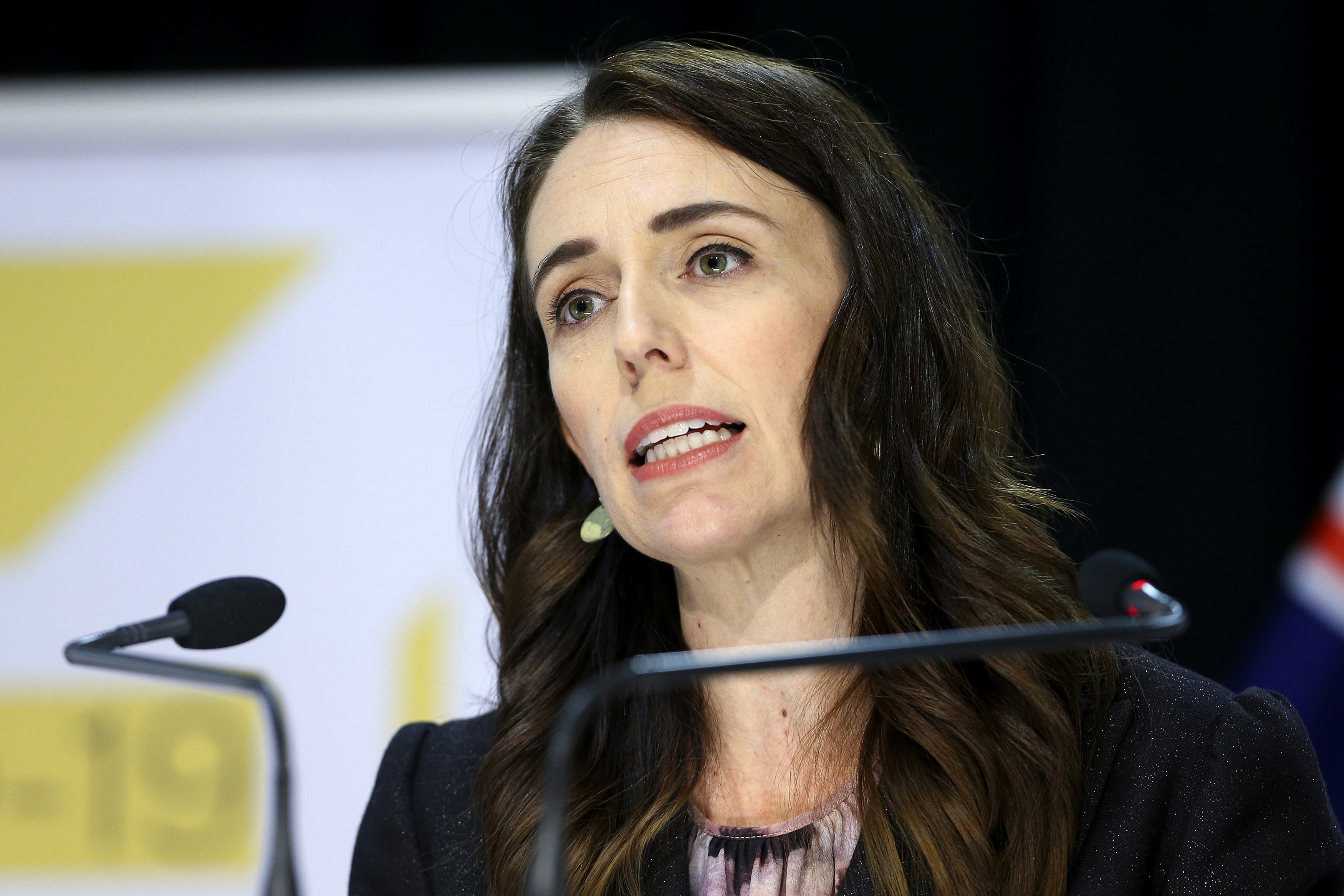 Halfway into a Facebook Live video last week, updating the world on New Zealand’s plan to reopen restaurants, schools and even movie theatres, Prime Minister Jacinda Ardern noticed a concern cropping up among the commenters: They thought she looked tired.

She had plenty of reason to be exhausted, managing a pandemic as well as a daughter in diapers. But instead, she blamed the unflattering beige curtains behind her, then spun her phone around to show off the vintage cane furniture with green frond upholstery in her favourite room at the Prime Minister’s residence.

“This is a fabulous chair,” said Ardern, a global progressive icon, plopping down after the brief tour. “And this is a much better corner, because where I was sitting before was right next to the nappy bucket, which I’m going to admit was not the freshest place to be sitting.”

“So,” she continued after a deep breath, “when it comes to health services, you’ll see those starting to wind back up.”

Pandemics are often described as crises of communication, when leaders must persuade entire populations to suspend their lives because of an invisible threat. Watching Ardern on Facebook, her favoured conduit, is a lesson in rhetorical blending: epidemiology brightened with empathy, law leavened with mom jokes. And it has been strikingly effective.

Ardern helped coax New Zealanders — “our team of five million”, she says — to buy into a lockdown so severe that even retrieving a lost cricket ball from a neighbour’s yard was banned. Now the country, despite some early struggles with contact tracing, has very nearly stamped out the virus, exiting isolation with just 21 deaths and a few dozen active cases.

But at a time when Ardern, 39, is being celebrated in some quarters as a saint — when even a comedian imitating her says she’s so nice that “to make fun of Jacinda almost feels like making fun of a puppy” — a lot gets missed.

Halos can make heretics out of legitimate critics, including epidemiologists who argue that New Zealand’s lockdown went too far, that other countries suppressed the virus with less harm to small businesses.

And Ardern’s canonisation diminishes two powerful forces behind her success: Her own hard work at making connections with constituents, and the political culture of New Zealand, which in the 1990s overhauled how it votes, forging a system that forces political parties to work together.

“You need the whole context, the way the political system has evolved,” said Helen Clark, a former Prime Minister who hired Ardern as an adviser more than a decade ago. “It’s not easily transferable.”

Ardern, who declined to be interviewed for this article, is the product of a particular time and place: She grew up in a rural nation of lonely struggle, where demands were growing for a more responsive brand of politics.

In 1965, New Zealand was the world’s sixth-wealthiest country per capita, but by 1980, when Ardern was born, it had slipped to 19th. And that was before free-market reforms led to major job losses in manufacturing, public service and farming.

Ardern, the daughter of a police officer and a cafeteria worker who were Mormon, has often recalled seeing forestry jobs disappear in the small town where she grew up, leaving behind suicides, poverty and illness — including a case of hepatitis for her babysitter.

Alongside the country’s economic frustration, the electoral system seemed to have broken down. Several elections produced results widely seen as unfair, with the popular vote going to one party and the majority of legislative seats to the other.

It all reached a breaking point in 1992, when unemployment peaked at 10.7 per cent and a national referendum asked New Zealanders if they wanted to remake how the country conducted elections. They responded with a resounding yes.

New Zealand adopted a German-style system that lets people cast two ballots: one for a local MP and one for a party. Ardern was in high school when the first election under the new system produced what would become a trend: gains for smaller parties, and a coalition government.

Whether it is the world’s best-designed democracy, as some government geeks claim, Kiwis have been clear about what they want. No single party has won a majority since 1996, encouraging a culture of cooperation, moderation and openness.

“There is more responsiveness required,” said Richard Shaw, a politics professor at Massey University in Palmerston North, New Zealand. “You have to be seen listening, and in substance actually listening, because you don’t have the institutional wherewithal to simply ignore what others think.”

That attentiveness is a vital component of Ardern’s leadership style — what has come to be known as her politics of kindness.

Much of the world first saw Ardern in action after the 2019 Christchurch terrorist attacks, when she stood with the Muslim victims of a white supremacist mass shooter and declared: “They are us. The person who has perpetuated this violence against us is not.”

The urge to draw people into an “us” rather than an “us versus them” has served New Zealand well during the coronavirus pandemic, when truly everyone is being threatened.

It follows an evolution in how Ardern speaks and handles leadership. As recently as a few years ago, she presented herself as a much more conventional politician, posting videos about homelessness, social workers or a new bike repair station.

With her 2017 election victory, however, she seemed to emerge from the constraints of what might be expected from a typical (male) politician. She quickly became a leader who could talk policy from a podium, dress down a sexist commentator on camera or post a Facebook video encouraging a rugby team while a cat on her lap struggled against a plastic collar the size of a lampshade.

In June 2018, she opened up even more to her audience, with a Facebook Live of herself leaving the hospital with her newborn daughter, Neve. She was the first female world leader to give birth in office since Benazir Bhutto of Pakistan in 1990. The comments pouring in were overwhelmingly positive, but hinted at high expectations.

“Get some rest and enjoy her before you get back to work,” one woman wrote.

Her response was not to hide from critics who questioned whether she could do the work of both a mother and a world leader. She made them watch. When Ardern returned after about six weeks, her Facebook presence became more active — a flood of scenes from home and work as she communicated her way through the challenge.

“She felt she had to hit the ground running,” said Clark, the former Prime Minister, who has stayed close to Ardern. “There was a lot of meanspirited criticism — the ‘part-time Prime Minister’ hashtag — which would never have been said about a man.”

Around this time, Ardern started doing weekly updates, often from home, mixing comments about nap time with details about poverty or transportation legislation. With each update, she got better at boiling down government into a conversation you might hear over dinner.

They became a model for how she has communicated online during the pandemic.

In her most popular Facebook Live video, from just before the start of the lockdown on March 25 — 5.3 million views and counting — Ardern appeared in a faded green sweatshirt after putting Neve to sleep. Her elbow on her knee, she asked everyone to be kind. “Stay at home, break the chain and you’ll save lives,” she said.

It was the start of a relationship that was less saint and disciples, more friends or teammates. “You’ll be seeing me lots and lots,” she told the people tuning in. And they have.

In addition to daily briefings with public health officials, Ardern also started hosting her own question-and-answer sessions with experts, which she used to target misinformation, and she deployed Facebook Live updates to respond to questions from commenters.

Her popularity — her halo — has sometimes seemed to blind her fans to deeper problems.

New Zealand started out with little contact tracing capacity and fewer ICU beds per capita than most developed countries. The government struggled to work through requests for exceptions to the lockdown. And epidemiologists say the shutdown may have caused undue harm to businesses without corresponding benefits to public health.

“The harder you push your lockdown, the more you get unintended consequences,” said Dr Simon Thornley of Auckland University. “If you want to separate people more effectively, then you have to keep more of the food and services open, more of society open, so people don’t congregate.”

Dr Thornley said he worried that a second wave of infections would lead to another overly harsh response. But he noted that Ardern had been quick to listen and pivot, allowing gatherings of up to 100 people sooner than Australia and many other countries that have eased lockdowns.

It reflects something that Ardern has talked about a lot in her most recent Facebook videos: agility.

With unemployment soon expected to reach nearly 10 percent, and with a federal election scheduled for September, the next phase of New Zealand’s coronavirus response will require Ardern to do a lot of adapting and explaining.

Facebook will be where to find her. In her video detailing the eased restrictions, Ardern, who did look tired, even in her favourite chair, promised viewers she would stay in touch.

“Thanks for joining me,” she said, smiling. “And look after yourselves.”

Around the world, billions are staying home to curb the spread of the coronavirus, except for medical personnel, police officers, pharmacists, grocery store workers and others who have been deemed essential workers in many places.

In New Zealand, that list grew by two after Ardern, announced that the Easter bunny and the tooth fairy were considered essential workers, too.

“As you can imagine, at this time, of course, they are going to be particularly quite busy at home with their family as well and their own bunnies,” Ardern said, injecting levity into a serious situation and seeking to soothe anxious children yearning to head outdoors to play.

Ardern on March 24 asked New Zealanders to remain at home for a month to stop the spread of the virus. As Easter approaches on Sunday, it appears many countries, as well as states in the US, will remain under some form of stay-at-home directive for the holiday.