Israel will continue to respond forcefully: Benjamin Netanyahu on Palestine 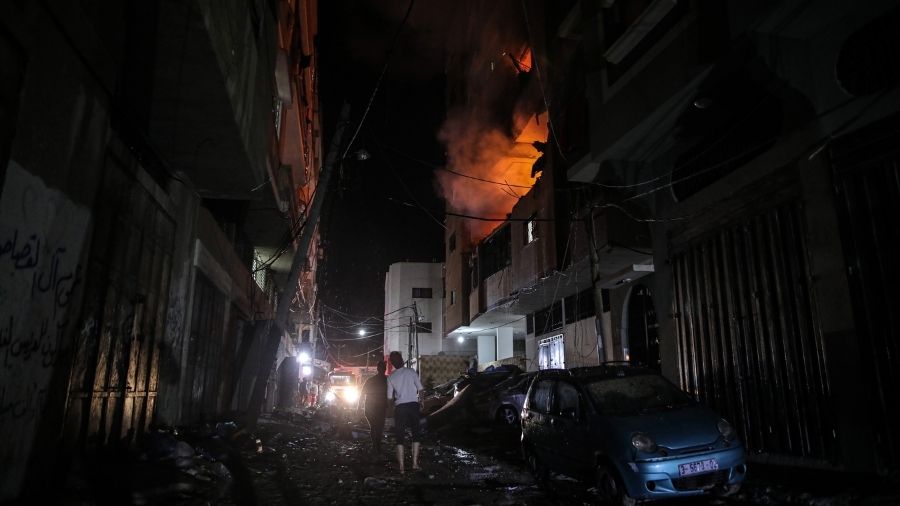 The violence continued amid increased U.S. efforts to help mediate a cease-fire, as President Joe Biden spoke with Israeli and Palestinian leaders and an American envoy, Hady Amr, landed in Israel for two days of talks with Israeli and Arab counterparts. They joined efforts led by Egyptian, Qatari and U.N. officials to secure a break in the fighting.

But by Saturday night, those efforts showed no sign of success: The fighting is the most intense since 2014 and has taken on a rare complexity because of its spread across the entirety of Israel and the occupied territories.

The death toll is overwhelmingly higher in Gaza, where at least 145 people have been killed since Monday, according to Palestinian officials. But Israeli cities have been wracked by civil unrest for days, amid mob attacks by both Jews and Arabs. And they have been targeted by more than 2,800 missiles from Gaza, 90% of which have been intercepted by the Iron Dome, an anti-missile detection system partly financed by the United States. Ten Israeli residents have been killed, along with two Israeli soldiers, according to the Israeli government.

The Israeli army said it had made more than 670 of its own strikes in Gaza by Saturday night. One of the most recent was in the Shati refugee camp in Gaza, which early Saturday killed at least 10 members of the same extended family, eight of them children, according to Palestinian officials and local news reports.

Hundreds of thousands of Gaza residents are descended from Palestinians who fled their homes in what is now Israel during the 1948 Arab-Israeli war, and their towns are still known as refugee camps, even though they now resemble small suburbs.

Mohammed al-Hadidi, father of four of the slain children, said his family had gone to the camp to celebrate Eid al-Fitr, an Islamic festival. His wife, her brother’s four children and her sister-in-law were also among those killed, and only a 5-month-old boy, Omar, was pulled from the rubble alive.

“They were sleeping in their homes,” al-Hadidi said, speaking to Shehab, a news agency linked to Hamas. “They weren’t holding weapons, they weren’t firing rockets and they weren’t harming anyone.”

Later, as rescue teams picked their way through the rubble, al-Hadidi could be seen howling at the ruins where his children’s bodies had been found. In one video of the scene posted on social media, he swayed while several men held him up.

The Israeli army said it had “attacked a number of Hamas terror organization senior officials in an apartment used as terror infrastructure in the area of the al-Shati refugee camp” but did not release more information. The Palestinian militant group Hamas controls the Gaza Strip.

Hours after speaking with Biden, Prime Minister Benjamin Netanyahu of Israel posted a speech to Facebook in which he vowed to continue attacks until Israel’s security from Hamas rockets fire is guaranteed. “You know and I know: No country would tolerate this,” Netanyahu said. “Israel has responded forcefully to these attacks and we will continue to respond forcefully until the security of our people is reinstated and restored.”

A spokesperson for the Israeli foreign ministry, Lior Haiat, said that Israel did everything possible to minimize civilian casualties and that it was Hamas that fired indiscriminately at Israeli civilians. “Every one of those missiles that are being launched from the Gaza Strip to Israel is actually a terror attack,” Haiat said. “But not only that — every one of those missiles is also a war crime.”

Hamas and its allies in Gaza returned fire with a barrage of rockets across central Israel in the early afternoon, sending sunbathers sprinting from the beaches of Tel Aviv toward bomb shelters.

Most of the rockets were intercepted by the Iron Dome. But at least one landed in Ramat Gan, a Tel Aviv suburb, killing one person, Israeli media reported. Another rocket fell near an Ikea store south of Tel Aviv but left no injuries.

On Saturday, the United Nations said more than 17,000 residents of Gaza had evacuated their homes and were sheltering in 41 U.N.-run schools across Gaza, only some of which were equipped with supplies, such as blankets, to house displaced people.

Across the coastal strip, the power supply had fallen to six to eight hours per day on average, and less than four in some areas, affecting medical centers, water supply and Gaza’s sewage treatment plants, the U.N. said. For the third consecutive day, running water to about 230,000 Gazans was shaky, and a desalination plant was not operating for the fifth day in a row, disrupting drinking water for a quarter-million people.

On Saturday afternoon, the Israeli air force also destroyed two towers in Gaza City, one of which housed the local offices of The Associated Press, an American news service, and Al-Jazeera, a Qatar-based television network. Once again, Israeli officials claimed the target housed militant infrastructure.

The Israeli army first called the building’s owner, Jawad Mahdi, giving him an hour to evacuate his tenants.

The Associated Press described the attack as “an incredibly disturbing development,” adding: “We narrowly avoided a terrible loss of life. A dozen AP journalists and freelancers were inside the building and thankfully we were able to evacuate them in time.”

The attack came just days after the home of an AP correspondent in Gaza, Fares Akram, and the offices of several Palestinian news outlets, were also bombed. Gary Pruitt, the AP’s CEO, said he was “shocked and horrified” by the building’s destruction.

‘We have had no indication Hamas was in the building or active in the building,” Pruitt said. “This is something we actively check to the best of our ability.”

On Saturday, the White House press secretary, Jen Psaki, said on Twitter that the United States had “communicated directly to the Israelis that ensuring the safety and security of journalists and independent media is a paramount responsibility.”