IS leader appears in video for first time in 5 years

With a $25 million US bounty on his head, Abu Bakr al-Baghdadi is the world's most wanted man 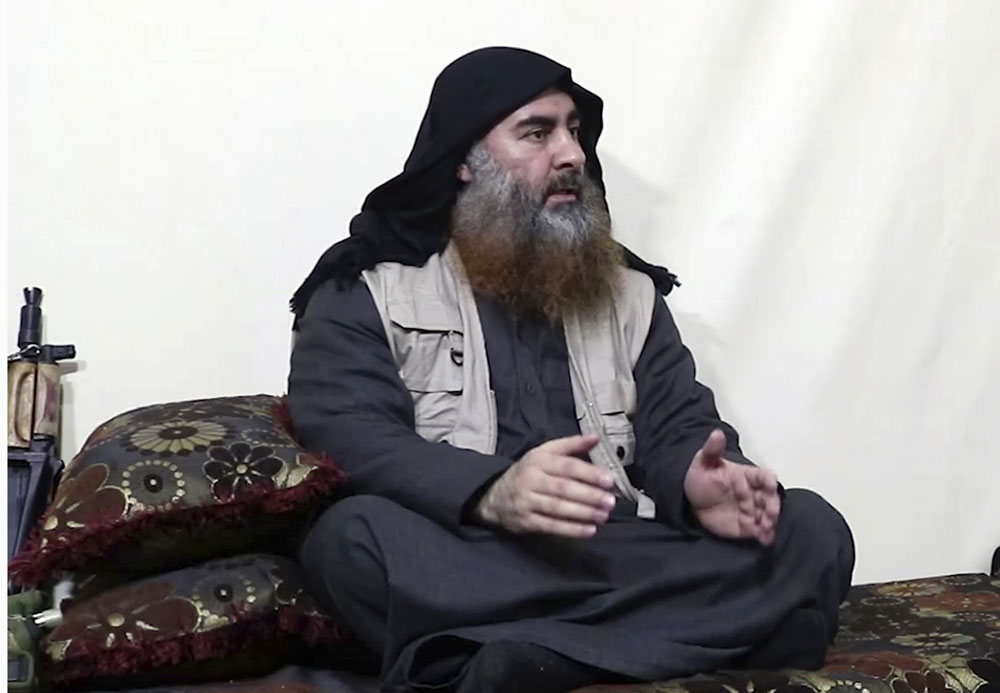 The shadowy leader of the Islamic State group appeared for the first time in five years in a video released by the extremist group's propaganda arm on Monday, acknowledging defeat in the group's last stronghold in Syria but vowing a 'long battle' ahead.

The SITE Intelligence group said Abu Bakr al-Baghdadi, in the video, also discussed the Easter Day bombings in Sri Lanka which killed over 250 people and for which the group claimed responsibility.

The video released by Al-Furqan on Monday shows al-Baghdadi with a bushy grey and red beard, wearing a black robe with a beige vest and seated on the floor with what appears to be a machine gun propped up next to him. He is speaking with three men seated opposite him whose faces were covered and blotted out.

It is his first video appearance since he delivered a sermon at the al-Nuri mosque in the Iraqi city of Mosul in 2014. In that video, he appeared as a black-robed figure with a trimmed black beard to deliver a sermon from the pulpit of the mosque in which he urged Muslims around the world to swear allegiance to the caliphate and obey him as its leader.

Al-Bagdadi acknowledged that IS lost the war in the eastern Syrian village of Baghouz, which was captured last month by the US-backed Kurdish-led Syrian Democratic Forces.

'In fact, the battle of Islam and its people against the Crusaders and their followers is a long battle,' he said.

He said the battle of Baghouz demonstrated the 'barbarism and brutality' of the West and the 'courage, steadfastness and resilience of the nation of Islam.'

'This steadfastness shocked the hearts of the Crusaders in what increased their rage,' he added.

Referring to the setbacks in battle, he said the 'brothers' of the many fallen fighters 'will avenge that, as they will not forget as long as they have blood in their veins, and there will be a battle after this one.'

It is unclear when or where the video was filmed. Al-Baghdadi spoke slowly and haltingly in the video.

With a $25 million US bounty on his head, al-Baghdadi is the world's most wanted man, responsible for steering his chillingly violent organization into the mass slaughter of opponents, and directing and inspiring terror attacks across continents and in the heart of Europe.

Despite numerous claims about his death in the past few years, al-Baghdadi's whereabouts remain a mystery. He appeared in public only once, in 2014. Since then, many of his top aides have been killed, mostly in US-led coalition airstrikes.

He is among the few senior IS commanders still at large after two years of steady battlefield losses that saw the self-styled 'caliphate' shrink from an area the size of Britain to a tiny speck in the Euphrates River valley.

Although largely seen as a symbolic figurehead of the global terror network — he was described as 'irrelevant for a long time' by a coalition spokesman in 2017 — al-Baghdadi's capture would be a coveted prize for the various players across both Syria and Iraq.

But so far, he has eluded the Americans, Russians, Syrians, Iraqis and Kurds.

Islamic State weaker, but not defeated

IS flushed out of last village in Syria