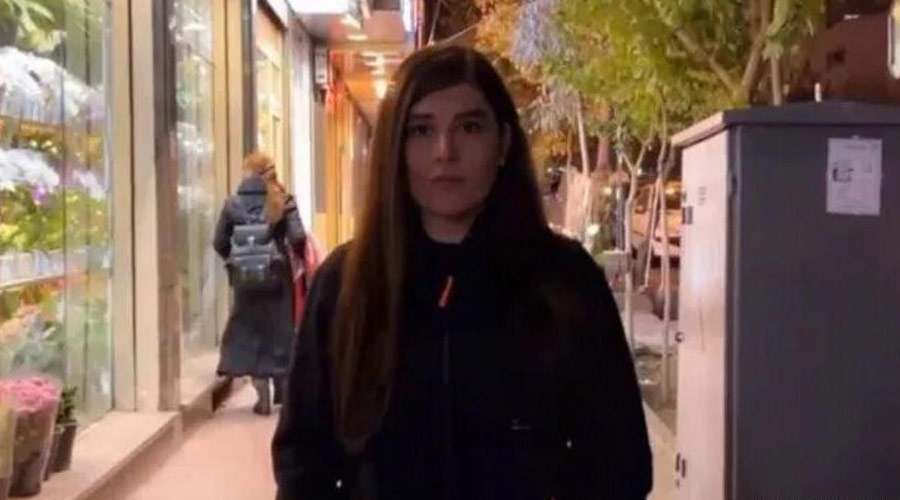 Hengameh Ghaziani posted a video on Instagram, in which she criticized the Iranian regime and took off her headscarf.
Hengameh Ghaziani/Instagram
Deutsche Welle   |   Published 24.11.22, 12:24 PM

Iranian actresses Hengameh Ghaziani and Katayoun Riahi were both arrested after being summoned by prosecutors to investigate their "provocative" posts on social media and their media activities, where they were not wearing a headscarf.

Ghaziani and Riahi are not alone in this. More and more personalities from the cultural sphere are siding with the protesters who are calling for a regime change in Iran.

The women-led protests in Iran denouncing the traditional regime have been going on for a good two months now. They began after the death of 22-year-old Iranian-Kurdish Jina Mahsa Amini, who was arrested by the Guidance Patrol, also known as the "morality police," in Tehran and died shortly thereafter in hospital under mysterious circumstances.

The headscarf as an ideological symbol

An important part of the protest movement is the removal of the headscarf. "The headscarf in Iran is a symbol of compulsory hijab," women's rights activist Asieh Amini told DW. "The Islamic Republic of Iran has always used this symbol as its ideological flag to say that the Muslim society of Iran is like this." That's why the headscarf is hated by many Iranian women today.

While all segments of society are involved in the protests, they are considered led by women because "they were the first group to lose their basic and fundamental rights after the 1979 revolution," Amini said.

Many people in Iran do not want to obey the hijab requirement or have any other form of religious government, said Amini. Taking off or burning the headscarf as a "symbol means opposing the religious government. This means also that the [current] revolution of the Iranian people is a secular revolution."

Actors use their popularity

More and more celebrities are showing solidarity with the protest movement. Actresses Hengameh Ghaziani and Katayoun Riahi are not the first and probably not the last.

According to activist Amini, "For many years, the Islamic Republic of Iran has tried to make the celebrities in Iran act according to the Islamic law and in fact obey the orders dictated by the government. Now they are standing on the side of the people, and they have a great influence on public opinion."

Hengameh Ghaziani, Ketayoun Riahi and Taraneh Alidoosti are actresses who have millions of fans, Amini pointed out. When they take off the hijab, it's seen by millions of their followers — "and they can then support or emulate that."

Before her arrest, 52-year-old Hengameh Ghaziani had already indicated that she — like a number of other prominent figures — had been summoned by the judiciary. Shortly after, she posted a video on Instagram in which she removes her hijab..

"Maybe this will be my last post," she wrote on the social media platform on Saturday. "From this moment on, whatever happens to me, know that I am, as I have always been, with the Iranian people until my last breath."

The video, which is now no longer online, was recorded in a shopping street. It shows Ghaziani standing silently in front of the camera without a headscarf. Then she turns around and ties her hair into a ponytail.

Nearly everyone is at risk of being arrested

Amini emphasizes that many different people are currently being arrested in Iran, not only political and women's rights activists. They include "ordinary people who protested in the streets, journalists, artists, or even people who just recited a poem or sang. The intensity of repression and arrest and even kidnapping of people in the street is very high. Many of those arrested are teenagers!"

And even before the start of the protest movement triggered by Jina Mahsa Amini's death, Iranian filmmakers, for example, were under pressure.

Award-winning directors Mohammad Rasoulof and Jafar Panahi have been in detention since July this year as part of an escalating clampdown on dissident voices. Many more artists and cinematographers, such as Bahram Beyzaei, Naser Taqvaei and Sousan Taslimi, who said no to the orders dictated by the regime, were censored or banned from working, Amini noted. "They were the main pioneers" of the current protest movements.