Iran prepares to withdraw from parts of nuclear deal 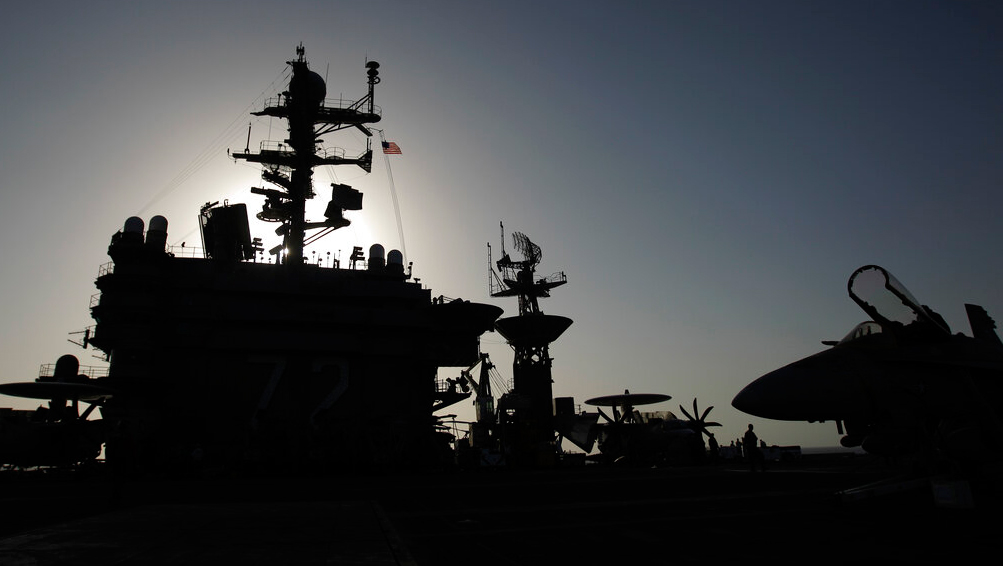 The US is dispatching the USS Abraham Lincoln and other military resources to the Middle East following “clear indications” that Iran and its proxy forces were preparing to possibly attack U.S. forces in the region, according to a defense official on May 5, 2019.
(AP)
The Telegraph   |   Tehran   |   Published 08.05.19, 10:39 AM

Iran on Wednesday will announce it is partially withdrawing from the nuclear deal it struck with world powers, its state-run news agency reported, a year to the day that President Donald Trump pulled America from the accord.

The terms of the withdrawal remain unclear, though the IRNA news agency said President Hassan Rouhani will explain Iran's decision in letters to leaders of Britain, France and Germany that will be handed to ambassadors in Tehran. Iranian Foreign Minister Mohammed Javad Zarif separately will write to the European Union, the agency said.

The semi-official ISNA news agency reported late Tuesday that Zarif had left for Moscow to meet with Russian leader Vladimir Putin to discuss bilateral and international issues, without elaborating.

Details of the letters, all to signers of the 2015 accord, will not be publicly disclosed, it said.

The letters will come as officials in the Islamic Republic previously warned that Iran might increase its uranium enrichment, potentially pulling away from a deal it has sought to salvage for months.

Already, the White House has announced the deployment of a US aircraft carrier and a bomber wing to the Persian Gulf because of potential threats from Iran. A US official in Washington said Tuesday the intelligence information which prompted that move included indications Iran had put short-range ballistic missiles aboard boats in or near the Persian Gulf. The official agreed to discuss the sensitive situation only on condition of not being quoted by name.

The United Nations' nuclear watchdog says Iran has continued to comply with the terms of the 2015 nuclear deal, which saw it limit its enrichment of uranium in exchange for the lifting of economic sanctions. But American sanctions have wreaked havoc on Iran's already-anemic economy, while promised help from European partners in the deal haven't alleviated the pain.

Trump campaigned on a promise to tear up the deal struck by his predecessor, Barack Obama. While Trump has sought to dismantle much of Obama's policies, he particularly criticised the Iran nuclear deal for failing to address Tehran's ballistic missile program and what he described as its malign influence across the rest of the Mideast.

A statement Sunday night from US national security adviser John Bolton said the USS Abraham Lincoln, other ships in the carrier's strike group and a bomber wing would deploy to the Mideast. Bolton blamed 'a number of troubling and escalatory indications and warnings,' without elaborating.

'The United States is not seeking war with the Iranian regime, but we are fully prepared to respond to any attack, whether by proxy, the Islamic Revolutionary Guard Corps, or regular Iranian forces,' Bolton said.

Iran's hard-line Javan newspaper, associated with the Revolutionary Guard, said Wednesday would 'ignite the matchstick for burning the deal.' It suggested in its Tuesday edition that Iran may install advanced centrifuges at its Natanz facility and begin enrichment at its Fordo facility, activities prohibited under the nuclear deal.

The USS Abraham Lincoln had been in the Mediterranean Sea conducting operations alongside the USS John C. Stennis, another aircraft carrier that has twice been in the Persian Gulf in recent months. On Tuesday, US military officials said the Lincoln would be skipping a planned port call in Croatia to more rapidly reach the Persian Gulf.

However, American military officials have stopped the near-continuous presence of aircraft carriers in the Persian Gulf, a pattern set following the 1991 Gulf War. American air bases spanning the region can scramble fighter jets and drones, lessening the necessity of an aircraft carrier as US officials also worry about China and Russia.

Already in the Persian Gulf is a group of US Navy warships led by the USS Kearsarge, an amphibious assault ship carrying troops from the 22nd Marine Expeditionary Unit. The Kearsarge also carries AV-8B Harrier fighter jets, MH-60 helicopters and MV-22 Osprey airplanes.

Across the wider 5th Fleet, there were 17 warships deployed, according to the most-recent count by the US Naval Institute, which tracks deployments around the world.

The Bahrain-based 5th Fleet declined to comment on the White House announcement when reached by the AP on Monday.

It also remains unclear where the bomber wing would be deployed to the region. Typically, the al-Udeid Air Base in Qatar, home to the forward headquarters of the US military's Central Command, hosts such bomber deployments.

In late March, the Air Force acknowledged a rare gap in bomber cover in the Mideast after a squadron of B-1 Lancers left al-Udeid to return to Texas. B-52 bombers also had been deployed to the area to keep up attacks on the Islamic State group, the first time the aging aircraft had deployed to the region in 25 years.

Officials at al-Udeid, which also hosts the F-35 fighter jet, declined to answer questions from the AP. However, a statement Tuesday from Central Command said the Air Force again planned to deploy B-52s to the region.

The Trump administration, which abruptly announced in December that it was pulling out of Syria, still maintains 2,000 US troops in the northern part of the war-torn country. Officials suggest they serve as a check on Iranian ambitions and help ensure that Islamic State fighters do not regroup. No significant US forces have so far withdrawn from Syria.

Trump has also said he has no plans to withdraw the 5,200 troops stationed in Iraq as part of a security agreement to advise, assist and support the country's troops in the fight against IS. Earlier this year, Trump angered Iraqi politicians and Iranian-backed factions by saying troops should stay there to keep an eye on neighbouring Iran.