If the recorder is undamaged, it could provide valuable additional information to investigators 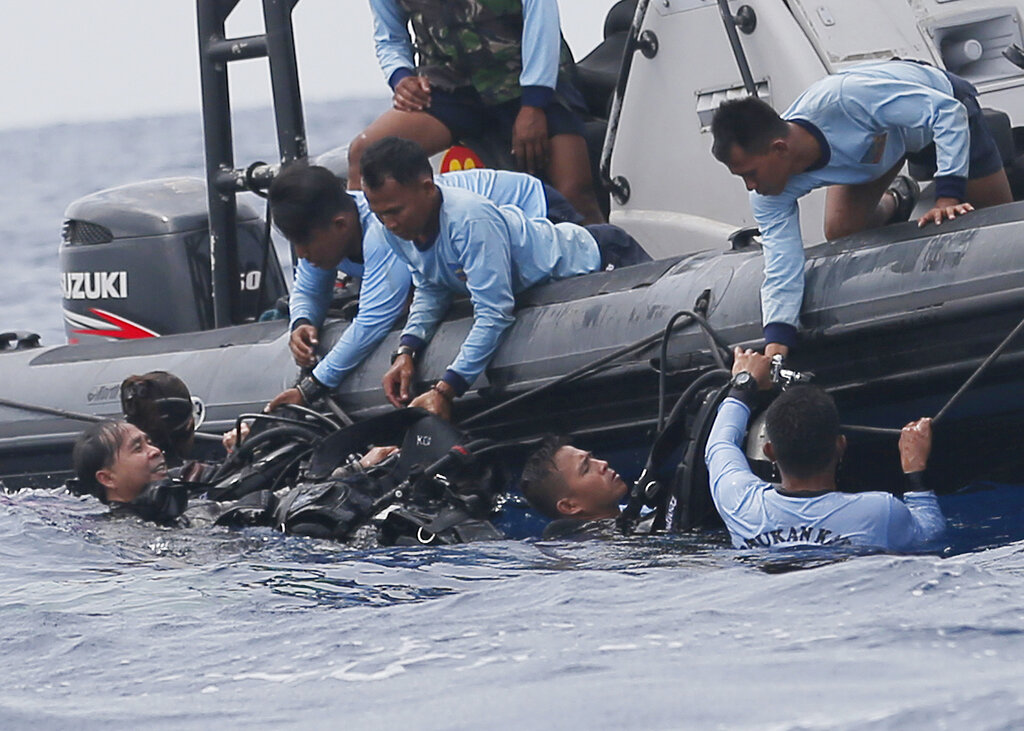 Navy divers have recovered the cockpit voice recorder of a Lion Air jet that crashed into the Java Sea in October, Indonesian officials said on Monday, in a possible boost to the accident investigation.

Ridwan Djamaluddin, a deputy maritime minister, told reporters that remains of some of the 189 people who died in the crash were also discovered at the seabed location. 'We got confirmation this morning from the National Transportation Safety Committee's chairman,' he said.

The device is being transported to a navy port in Jakarta, Nugroho said, and will be handed over to the transportation safety committee, which is overseeing the accident investigation.

'This is good news, especially for us who lost our loved ones,' said Irianto, the father of Rio Nanda Pratama, a doctor who died in the crash.

'Even though we don't yet know the contents of the CVR, this is some relief from our despair,' he said.

Relatives of passengers of a crashed Lion Air jet check personal belongings retrieved from the waters where the airplane is believed to have crashed, at Tanjung Priok Port in Jakarta, on October 31, 2018.
AP

The two-month-old Boeing 737 MAX 8 jet plunged into the Java Sea just minutes after taking off from Jakarta on Oct. 29, killing everyone on board.

The cockpit data recorder was recovered within days of the crash and showed that the jet's airspeed indicator had malfunctioned on its last four flights.

If the voice recorder is undamaged, it could provide valuable additional information to investigators.

The Lion Air crash was the worst airline disaster in Indonesia since 1997, when 234 people died on a Garuda flight near Medan. In December 2014, an AirAsia flight from Surabaya to Singapore plunged into the sea, killing all 162 people on board.

Lion Air is one of Indonesia's youngest airlines but has grown rapidly, flying to dozens of domestic and international destinations. It has been expanding aggressively in Southeast Asia, a fast-growing region of more than 600 million people.