The resolution failed to get adopted as only two Council members - Russia and China - voted in its favour, while US, UK and France voted against it and other Council members, including India, abstained 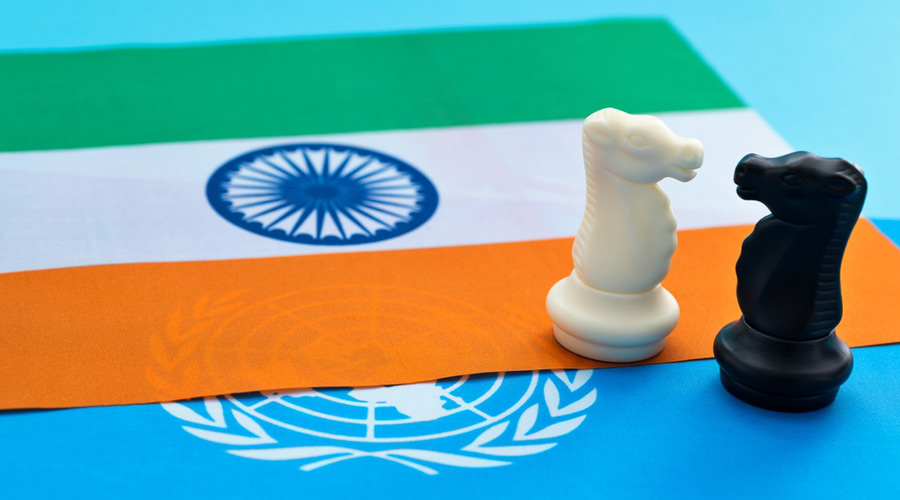 India has abstained on yet another resolution involving Ukraine, this time a motion sponsored by Russia at the UNSC that sought to establish a commission to investigate claims by Moscow that the US and Ukraine are carrying out military biological activities in laboratories in Ukraine in violation of the biological weapons convention.

The resolution failed to get adopted Wednesday as only two Council members - Russia and China - voted in its favour, while the US, the UK and France voted against it and the other Council members, including India, abstained.

In the explanation of the vote, Counsellor A. Amarnath from India's Permanent Mission to the UN said India attaches high importance to the Biological Weapons Convention (BWC), which is the first non-discriminatory disarmament treaty banning a complete category of weapons of mass destruction.

We remain committed to enhancing the effectiveness of the BWC and strengthening its implementation in letter and spirit, he said.

Amarnath said that India also reiterates the need to negotiate a comprehensive legally binding protocol providing for an effective, universal and non-discriminatory verification mechanism to strengthen the implementation of the Convention.

Factoring in all these aspects, India has decided to abstain from the resolution, he said.

US Ambassador Linda Thomas-Greenfield, in her statement on the UN Security Council (UNSC) resolution proposed by Russia on alleged bioweapons in Ukraine, said Washington voted against this resolution because it is based on disinformation, dishonesty, bad faith, and a total lack of respect for this body.

She said Russia has failed to provide any credible evidence to support these false allegations. And as you can see from the vote today, no one is buying it except China. I will not devote any more time, energy, or resources to these lies from Russia. Nor should the rest of the Security Council. Not while troops still occupy Ukrainian territory. And not while Russian forces continue to attack Ukrainian civilians and commit war crimes. Instead of letting Russia waste our time, we should focus on the truth and the horrors Russia has inflicted upon the Ukrainian people.

In his statement after the resolution failed to get adopted, Polyanskiy said Moscow will continue to act within the BTWC (Biological and Toxin Weapons Convention) framework and make the necessary efforts to establish all the facts related to the violation by the United States and Ukraine of obligations under the BTWC in the context of the activities of biological laboratories on Ukrainian territory. Sooner or later, all perpetrators will have to be accountable for such illegal activities in front of the global community anyway.

Referring to comments by Polyanskiy, Thomas-Greenfield said "Russia said this is a milestone. It is. It is a milestone for Russia's deception and lies. And the world sees it. An overwhelming number of the States Parties that spoke at the Geneva meeting considered that the issues raised by Russia were unsubstantiated and had been conclusively addressed. But that wasn't enough for Russia."

Amarnath noted that India had participated in consultations in Geneva in September on the matter under consideration and had expressed its views on this issue and had also expressed them during the meetings of the Council earlier.

I reiterate that any matter relating to the obligations under the BWC should be addressed as per the provisions of the Convention and through consultations and cooperation between the relevant parties, Amarnath said.

Amarnath added that India would like to underline the important role of international cooperation in the field of peaceful biological activities and the related exchange of scientific and technical information.

"India emphasizes the full and effective implementation of Article 10 of the Convention and underlines that biological related activities for peaceful purposes that are fully consistent with the Convention's obligations should not be undermined, he said.

Last week, Russian Permanent Representative Vassily Nebenzia said at a Security Council meeting that Moscow will put forward the draft resolution that will call for setting up and dispatching a commission to investigate the claims against the US and Ukraine regarding compliance with their obligations under the (BTWC) and activities of biological laboratories in the territory of Ukraine.

Nebenzia has said that over a long time, Russia has repeatedly expressed concern over military biological activities carried out with the most direct assistance and participation of the US Department of Defense (DoD) in laboratories in the territories of the former Soviet republics away from the North American continent and close to the Russian borders.

He has said that such activities are conducted inter alia indirectly through the Pentagon's Defense Threat Reduction Agency (DTRA) and private companies that are permanent contractors of the US DoD...This poses a direct threat to the biological security of Russia.

In the course of the special military operation in Ukraine, the Russian Federation obtained a variety of documents and evidence that disclosed the true nature of military biological activities of the US DoD and its contractors with Ukraine in the military biological area, he has said.