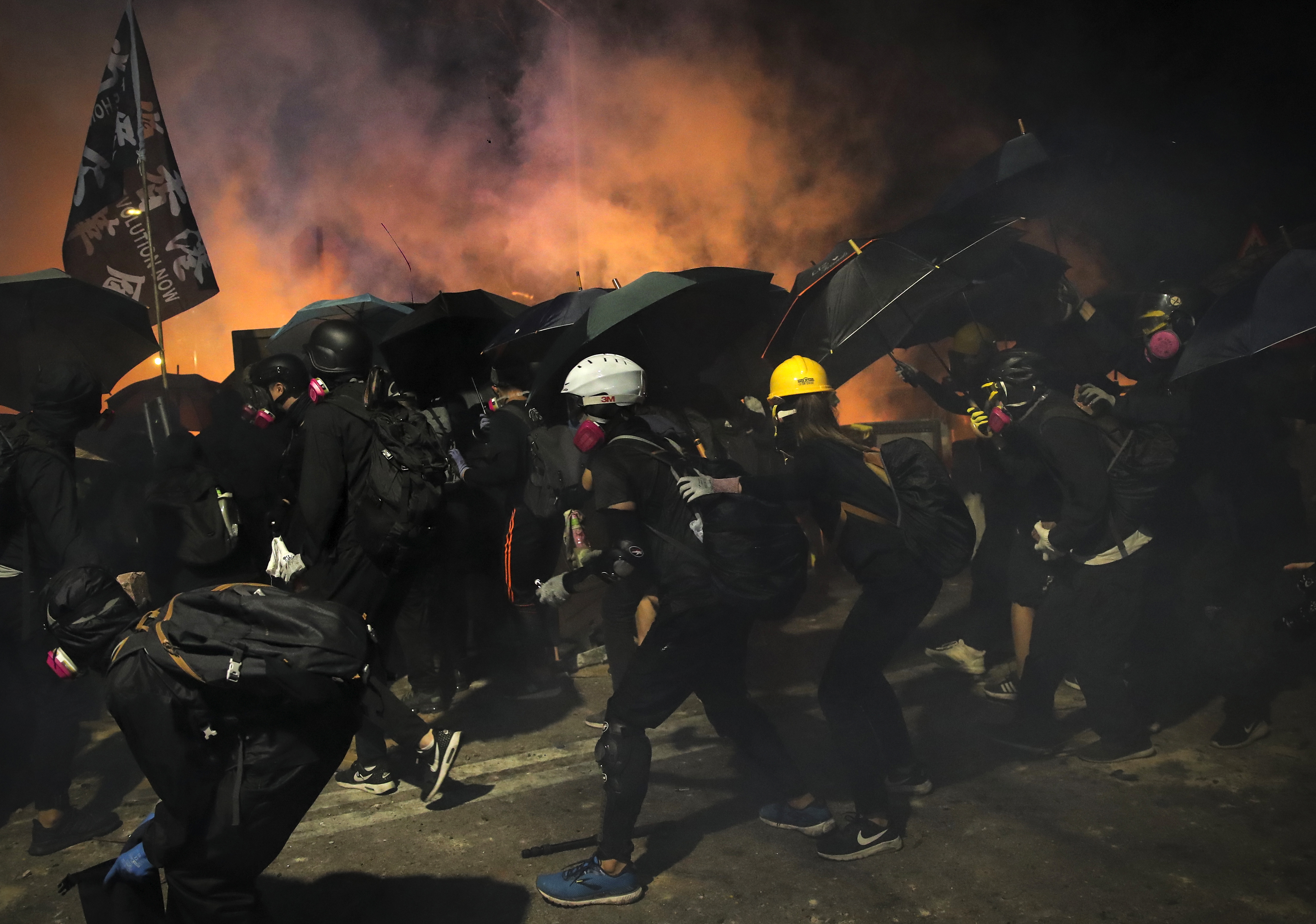 Protesters angered by the shooting of a Hong Kong demonstrator fanned out across the city on Tuesday, blocking transit and scuffling with the police.

The crowds brought parts of the city’s central business district to a standstill around lunchtime. Police officers also fired tear gas at protesters who threw bricks and built barricades near university campuses.

The protests in the semiautonomous Chinese city began in June over a contentious, but since-withdrawn, extradition bill. The demonstrations have since morphed into calls for greater democracy and police accountability.

Lam told reporters that the protesters were out to “create a phenomenon in which Hong Kong seems to have come to a standstill and people are not able to go to work and go to school”.

School administrators should urge students to stop taking part in illegal activities, she said, adding that her government would do its “very best” to ensure that local elections planned for November 24 were held in a “fair, just, safe, orderly” manner.

Separately, People’s Daily, an official government newspaper in mainland China, said in a commentary: “Only by supporting the police force to decisively put down the riots can a peaceful environment be restored and fair elections be held, and help Hong Kong start again.”There was more unrest downtown.

Hundreds of protesters, including many office workers, stormed Hong Kong’s central business district at lunchtime. Some formed human chains to pass along bags of bricks that front line activists were using to block traffic.

One activist sprayed “3 x 9 mm” on a bus in graffiti, referring to the three demonstrators who have been shot with live rounds by the police since the protests began in June.

Across the harbour, activists in the Mong Kok neighbourhood placed barricades in front of buses and punctured their tyres.

The city’s subway operator said on Tuesday morning that services were also delayed after petrol bombs had been thrown onto the tracks of a major rail line that runs to the border of the Chinese mainland.

Large groups of commuters were seen walking along the line’s tracks — a rare scene in a city known for its efficiency and order.

The demonstrations on Monday brought some of the worst violence that the city has seen in recent months. Lam called the combative protesters “enemies of the people” and warned that the city’s escalating unrest could take it on the “road of ruin”.

A police officer shot a black-clad protester at point-blank range on Monday morning in a neighbourhood where traffic had been snarled by roadblocks. Elsewhere, a man was doused with a flammable liquid and set on fire after he scolded protesters, video footage shows.

The police have said they are treating the immolation as an attempted murder.

The medical status of the protester who was shot had improved to serious from critical condition by Tuesday.