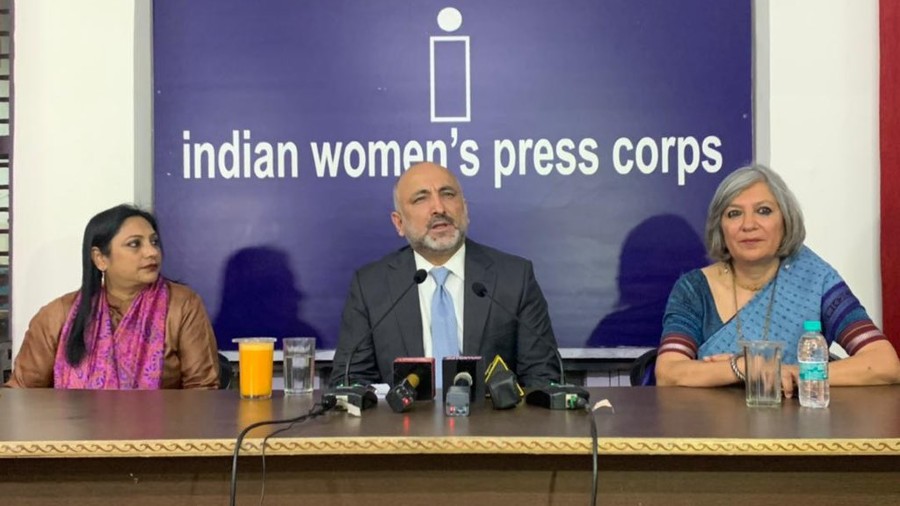 Afghanistan is seeking a greater role for India in all the fora discussing the peace process, the country’s foreign minister Haneef Atmar said here on Tuesday, arguing that lasting peace in his strife-torn nation depends on national, regional and international consensus.

“India is part of regional and international consensus-building,” Atmar said in an interaction with the media at the Indian Women’s Press Corps where he was categorical in stating that he did not discuss India’s approach towards the Taliban. “We leave it entirely to India to make that decision.”

Accepting that Hindus and Sikhs have been disproportionately affected by the violence in Afghanistan, the minister contested the impression in India that the two communities — whom he described as “a proud citizenry” of his country — are being specifically targeted.

“The violence against Afghans, unfortunately, did not spare our minorities either. It’s not a kind of persecution against a specific minority per se. It’s the general violence against the entire nation in which, unfortunately, this part of our population has been disproportionately affected,” Atmar said in response to a question, adding that it was the responsibility of the government to ensure their security.

Thanking India for offering protection to the Afghan people at risk in an oblique reference to the Citizenship Amendment Act, Atmar was quick to add that this had always been so.

“It’s not a new thing. Over the past decades, India has been a home for Afghans who felt at risk,” Atmar elaborated, adding that Afghanistan was working to ensure that it did not become a kind of minority cleansing by terrorists.

Explaining his country’s approach towards the Taliban, the minister — who met his Indian counterpart S. Jaishankar on Monday and national security adviser Ajit Doval before the interaction with the media — said: “We are negotiating with the Taliban so that Afghanistan doesn’t turn into a safe haven for terrorists who want to use our territory against other countries, including India.”

“The best strategy to secure the world against the menace of terrorism is to separate the Taliban from the rest of the regional and international terrorists, make peace with them on the condition that Afghanistan will remain a sovereign, peaceful, unified and independent country. Its governance will draw legitimacy from the free will of its people and inclusive governance.

“It will be committed to the rights of the Afghan people, men and women alike, will remain fully respectful of human rights and will have a multi-aligned policy with other countries.”

As for his government’s roadmap for the peace process, Atmar said the President had made an offer that if the Taliban accepted a political settlement and agreed to have elections as a legitimate means of transfer of power, then he was ready to hold early presidential elections, administered and monitored by the international community, before the completion of his term.

About the Afghan government’s expectations from the meetings lined up as part of various initiatives to broker peace, Atmar said: “We need to discuss three things with the Taliban which we haven’t been able to given their extremely unpredictable behaviour.… First is a permanent and comprehensive ceasefire and an end to the bloodshed. Second is a political settlement consistent with the vision of Afghanistan that is acceptable to the Afghan people.

Key to this will be that both sides agree to accept the free will of the Afghan people through elections. And thirdly, regional and international guarantees for the peace process.”

Further, he indicated that the various initiatives taken by different countries complement each other.

At Doha, there was progress on the rules of procedure. Moscow complemented that and Turkey — where another meeting is scheduled next month — will further it. “Regardless of the venue, the issues will be these three.”

At the same time, Atmar said that nothing of note could be discussed with the Taliban at the recent Moscow meeting. “They just delivered speeches which were not necessarily pro-peace and it was to the disappointment of all of us.”

US mentions rights at India talks