Beyoncé creates history as she became the first female artist to win 28 Grammys, Billie Eilish wins for theme song of unreleased 'No Time To Die' 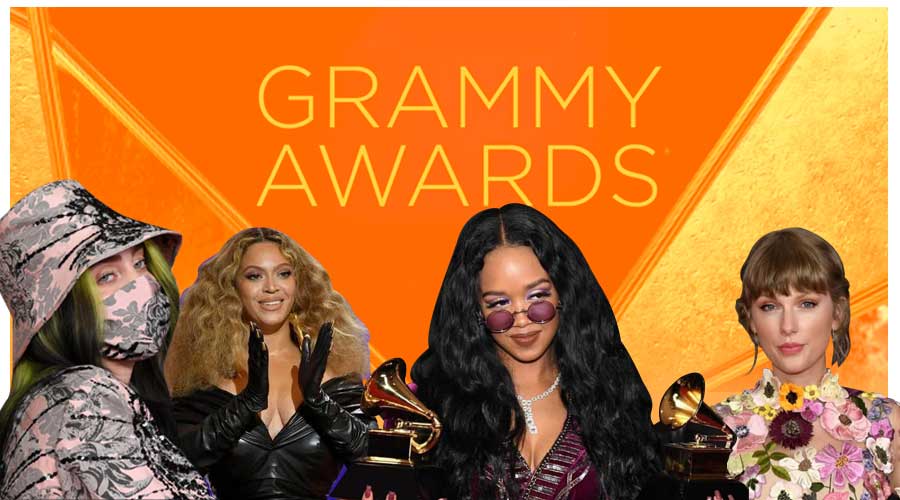 The 63rd annual Grammy Awards combined splendor, star power and pandemic-era versatility Sunday night to celebrate the music that emerged in a deeply challenging year, highlighting the Black Lives Matter protests and — after years of pointed criticism for past slights — the role of women in pop music.

With touring artists grounded and fans stuck at home, and the music industry pulling in billions of dollars from streaming yet criticized by artists over pay, the music world has been upended for the past year.

But the producers of the show promised a night of respect and togetherness, with a novel outdoor setting in downtown Los Angeles in which performing musicians faced each other while performing — and then gathered, masked and socially distant, to politely applaud each other’s acceptance speeches.

Women won all the night’s major awards. Megan Thee Stallion, the sparkplug Houston rapper who described her young ambition as to become “the rap Beyoncé,” took best new artist, and her song “Savage” — which featured Beyoncé as a guest — won for best rap performance and for best rap song.

“It’s been a hell of a year, but we made it,” Megan Thee Stallion said when accepting best new artist, while downtown traffic roared.

Billie Eilish, the 19-year-old who swept the awards last year, took record of the year for “Everything I Wanted,” and told Megan Thee Stallion: “You deserve this.”

Taylor Swift won album of the year for “Folklore” which she made entirely in quarantine. It was her third time winning that coveted prize. (She lost each of the five other awards she was nominated for this year.)

Beyoncé, the pop deity whose every move is hyper-analyzed online, won four awards, bringing her lifetime total to 28 Grammys — more than any other woman, and equaling the total for super-producer Quincy Jones.

Accepting the award for best R&B performance for her song “Black Parade,” which was released just as protests were breaking out last summer, Beyoncé said: “As an artist I believe it’s my job, and all of our jobs, to reflect the times, and it’s been such a difficult time.”

Even Beyoncé’s 9-year-old daughter, Blue Ivy Carter, took home a Grammy, her first: best music video for “Brown Skin Girl” (which she won with her mother and WizKid).

In an upset, the singer-songwriter known as H.E.R. won song of the year — beating Beyoncé, Eilish, Swift and Dua Lipa — for “I Can’t Breathe” a fist-in-the-air anthem for Black Lives Matter, with lines like “Stripped of bloodlines, whipped and confined/This is the American pride.”

“We wrote this song over FaceTime,” H.E.R. said, accepting the award, “and I didn’t imagine that my fear and that my pain would turn into impact, and that it would possibly turn into change.”

Other moments highlighted Black protest, pride and anger. Lil Baby performed his song “The Bigger Picture” as a dramatic showdown with riot police, and featuring a speech in which activist Tamika Mallory said: “President Biden, we demand justice.” And rapper DaBaby, in a glittery white suit and Chanel brooches, sang “Rockstar” another protest anthem, while conducting a choir of older white singers who danced along.

At other points, the theme was togetherness amid the pandemic, with an undercurrent of anxiety for things to get back to normal — especially in music.

Accepting best country album, for “Wildcard” — a category in which all the contestants were women — Miranda Lambert thanked the Grammys “for putting us together and letting us at least kind of be together and say hi,” and then called out to her band and crew: “I miss the hell out of y’all.”

The Grammys are usually the music world’s big moment each year for glitz and self-congratulation, with flashy performances and the minting of new pop royalty.

But this year the show itself was buffeted by the pandemic. Originally planned for January, it was delayed by six weeks because of rising coronavirus numbers in Los Angeles. And the event, normally a mega-production inside the Staples Center, had to be adjusted for safety.

“Tonight is going to be the biggest outdoor event this year besides the storming of the Capitol,” the night’s host, Trevor Noah, announced at the start of the show, televised by CBS.

The most noticeable change was the performance configuration, in which performers faced each other but kept at a distance. A shirtless Styles, in a leather jacket and feathery boa, opened the night as Eilish nodded along admiringly. The sisters of Haim and the rock-soul duo Black Pumas held their instruments, waiting their own turns. They were the kind of interactions that music fans used to see every night, but have been starved for since March 12, 2020, when virtually all live music shut down.

Swift sang a medley of songs from her twin pandemic albums “Folklore” and “Evermore” looking like a woodland heroine from a Maxfield Parrish print.

Megan Thee Stallion and Cardi B performed their ribald hit “W.A.P.” — “Wet, wet, wet,” they sang, one of the many censored versions of a song that is defiantly raunchy.

At an early ceremony at which 72 of the night’s 83 awards were handed out, Eilish and her brother, Finneas, shared best song written for visual media, for the theme song to the latest James Bond film, “No Time to Die,” which was delayed by the pandemic and still has not been released.

Early prizes also went to Fiona Apple, who won best rock performance for “Shameika” and alternative album for “Fetch the Bolt Cutters,” a huge critical hit. (Hours before the show began, Apple posted online that she would not be attending because of the scrutiny it brings.) The Strokes, among rock’s brightest lights in the early 2000s, won their first Grammy, best rock album, for “The New Abnormal.”

This year’s Grammys also brought to fever pitch some of the controversies that have been surrounding the show and its parent organization, the Recording Academy, for years.

After the Weeknd, the singer of megahits like “Blinding Lights” — and the performer at last month’s Super Bowl halftime show — was shut out of the nominations entirely, critics of the academy noted the tendency for Black artists to lose out in the top categories, and also attacked the academy’s practice of using unaccountable expert committees to make the final choices about nominations in 61 categories. The Weeknd himself (Abel Tesfaye) told The New York Times last week that he would boycott future Grammys in protest of those committees.

The awards also capped a tumultuous year in the music industry, with musicians losing the vital lifeline of touring but the business that surrounds them riding the popularity of streaming to new financial heights on the stock market and in private deals.

Some musicians, like Bob Dylan, Neil Young and Stevie Nicks, reaped huge rewards by selling their song catalogs for sums in the tens or even hundreds of millions of dollars — figures that seemed impossible just a decade ago, when the music business was widely seen as a ruined ship, sinking in a sea of digital piracy.

To survive, musicians have sold what assets they could, doubled down on creating content and toured via livestreams from their homes. Sarah Jarosz, who won best Americana album for “World on the Ground,” spoke to reporters on a Zoom call about making “lots of videos from here, in my living room, over the last year.”

The Grammys also highlighted the struggles of independent venues by having staff from four music spots — the Apollo Theater in New York, Station Inn in Nashville, Tennessee, and the Troubadour and Hotel Café in Los Angeles — present four awards.

Prine, the folk singer who died of COVID-19 last year at age 73, won two awards for his song “I Remember Everything.” Chick Corea, the jazz keyboardist who died of cancer last month at 79, also won two. Both men’s widows accepted their awards on their behalf.

Even in the Grammy celebrations themselves, hints came through of the tumult behind the scenes of the Recording Academy.

Controversies over the lack of minority representation at the Grammys went all the way down the ballot to the children’s music album category. Three of the five original nominees dropped out as a protest because no Black artists had been recognized.

Joanie Leeds, one of the two remaining nominees, won for “All the Ladies,” a tribute to great women, made with a long list of female collaborators. In her acceptance speech she cited a recent report about the poor representation of women in the music world, and sent a message to others in her field.

“We may be a small genre,” she said, “but we are really powerful. Let’s continue to be the change that we want to see.”