Global situation has become more challenging, agrees India and US

The remarks came amidst China's increasingly intimidatory behaviour in the region 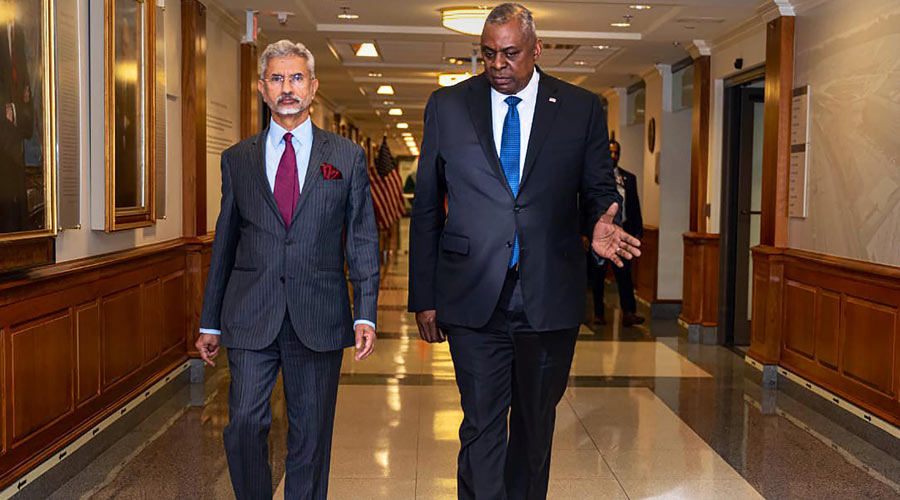 External Affairs Minister S Jaishankar and US Defence Secretary Lloyd Austin have agreed that the global situation this year has become more challenging, especially due to the challenges in the Indo-Pacific, and underscored the need to further strengthen the bilateral relationship, in particular the defence ties.

The remarks came amidst China's increasingly intimidatory behaviour in the region.

Jaishankar is here in the American Capital for bilateral consultations with several US Cabinet ministers, including his counterpart Secretary of State Antony Blinken.

I do share with you that the global situation has become far more challenging this year (due to) a variety of reasons, the Indo-Pacific in particular," Jaishankar said in his opening remarks at the top of his meeting with Austin at the Pentagon here on Monday.

"It is important that the stability, security and prosperity of the Indo-Pacific should be secured. That is best done amongst others by cooperation between two countries," he said.

In recent months, we have seen the PRC (People's Republic of China) intensify its efforts to challenge the rules-based international court from its unprecedented provocations in the Taiwan Strait to its actions in its neighbourhood, he said.

China claims nearly all of the disputed South China Sea, though Taiwan, the Philippines, Brunei, Malaysia and Vietnam all claim parts of it.

Beijing has built artificial islands and military installations in the South China Sea. China also has territorial disputes with Japan in the East China Sea.

The PRC continues to support Russia amid its unprovoked and cruel invasion of Ukraine. So we face sustained challenges to peace, security and prosperity in the region and beyond. But they only reaffirm the importance of our partnership, Austin said.

I'm grateful for your friendship. And we work together toward our shared vision of a free and open Indo-Pacific. And I look forward to a great discussion, he added.

Referring to his recent conversation with Defence Minister Rajnath Singh, Austin said these conversations reinforce the growing depth, breadth and ambition of the partnership between the two nations.

This partnership is moving from strength to strength. Today, we are positioning the US and Indian militaries to operate and coordinate more closely together than ever. We are taking significant steps to deepen our defence cooperation from stronger information sharing and defence industrial ties to cooperation in emerging defence domains, including through the launch of a new dialogue later this year," Austin said.

All this will help ensure that our militaries are ready, he added.

The United States and India, along with a dozen other Indo-Pacific partners, pushing to expand our region's prosperity for the Indo-Pacific Economic Forum. And through our deepening cooperation with Japan and Australia, we are delivering on the issues that matter the most to the region, from entering infrastructure development to maritime security, Austin said.

Jaishankar said he believes that defence and security cooperation are the bedrock of our contemporary relationship.

This has been expressed in closer policy exchange in coordination with policies on very important and sensitive challenges to growing defence trade and stronger defense industrial collaboration and military exercises, he said.

But, the ripple impact of our defence cooperation, I think, has a larger beneficiary implication on our relationship, Jaishankar said.

Earlier, Jaishankar was received at the riverside entrance of the Pentagon by Austin and was accorded an honour cordon by the US military.

During the honour cordon, visitors are greeted at the Pentagon stairs and welcomed with handshakes, before proceeding inside the building.

Accompanying him were India's Ambassador to the US, Taranjit Singh Sandhu, and other senior Indian officials. The Indian delegations were served cookies with flags of India and the United States on them.