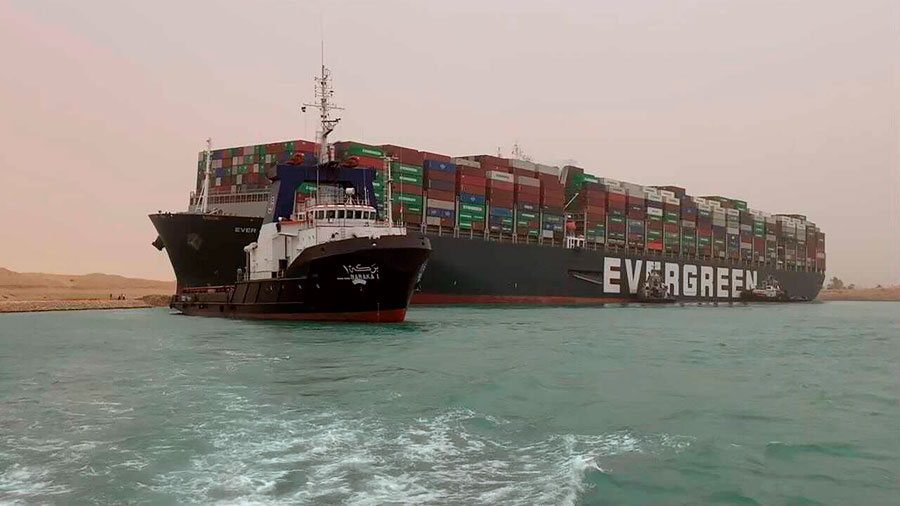 A boat navigates in front of the Ever Given, a container ship operated by a company called Evergreen.
New York Times News Service
Vivian Yee, Marc Santora   |   Cairo   |   Published 29.03.21, 01:49 PM

The mammoth cargo ship blocking one of the world’s most vital maritime arteries was wrenched from the shoreline and set partially afloat again early Monday morning, raising hopes that traffic could soon resume in the Suez Canal and limit the economic fallout of the disruption.

Salvage teams, working on both land and water for five days and nights, were ultimately assisted by forces more powerful than any of the machines rushed to the scene to assist in the rescue: the moon and the tides.

As water levels swelled overnight, the hours spent digging and excavating millions of tons of earth around the Ever Green paid dividends as the ship slowly regained buoyancy, according to officials.

While shipping officials and Egyptian authorities cautioned that the complicated operation was still underway, they expressed increasing confidence the ship would soon be completely free.

It appeared to be the culmination of one of the largest and most intense salvage operations in modern history, with the smooth functioning of the entire global trading system hanging in the balance.

Each day the canal was blocked put global supply chains another day closer to a full-blown crisis.

Vessels packed with the world’s goods — including cars, oil, livestock and laptops — usually flow through the waterway with ease, supplying much of the globe as they traverse the quickest path from Asia and the Middle East to Europe and the East Coast of the United States.

With concerns the salvage operation could take weeks, some ships decided not to wait, U-turning to take the long way around the southern tip of Africa, a voyage that could add weeks to the journey and cost more than $26,000 a day in fuel costs.

The army of machine operators, engineers, tugboat captains, and other salvage operators knew they were in a race against time.

Late Saturday, tugboat drivers sounded their horns in celebration of the most visible sign of progress since the ship ran aground late Tuesday.

The 220,000-ton ship moved. It did not go far — just 2 degrees, or about 100 feet, according to shipping officials. That came on top of progress from Friday, when canal officials said dredgers had managed to dig out the rear of the ship, freeing its rudder.

By Saturday afternoon, they had dredged 18 meters down into the canal’s eastern bank. But officials cautioned that the ship’s bow remained firmly planted in the soil and that the operation still faced significant hurdles.

The company that oversees the ship’s operations and crew, Bernhard Schulte Shipmanagement, said 11 tugboats were helping, with two joining the struggle on Sunday. Several dredgers, including a specialized suction dredger that can extract 2,000 cubic meters of material per hour, dug around the vessel’s bow, the company said.

The ship’s manager said that in addition to the tugboats and dredgers, high-capacity pumps will draw water from the vessel’s ballast tanks to lighten the ship.

Salvagers were determined to free the vessel as the spring tide rolled in, raising the canal’s water level as much as 18 inches, analysts and shipping agents said.

It was a delicate mission, with crews trying to move the ship without unbalancing it or breaking it apart.

With the Ever Given sagging in the middle, its bow and stern both caught in positions for which they were not designed, the hull is vulnerable to stress and cracks, according to experts. Just as every high tide brought hope the ship could be released, each low tide puts new stresses on the vessel.

Teams of divers have been inspecting the hull throughout the operation and have found no damage, officials said. It would need to be inspected again once it was completely free.

It would take some time to also inspect the canal itself to ensure safe passage. And with hundreds of ships backed up on either side, despite the promises of authorities to quickly clear the backlog, it will likely take days to clear the backlog.

Usual business could take days to resume amid huge backlog

With hopes rising that the partial refloating of the Ever Given means the Suez Canal will soon reopen for business, shipping analysts cautioned that it will take time — perhaps days — for the hundreds of ships now waiting for passage to continue their journeys.

Shipping analysts estimated the colossal traffic jam was holding up nearly $10 billion in trade every day.

“All global retail trade moves in containers, or 90% of it,” said Alan Murphy, the founder of Sea-Intelligence, a maritime data and analysis firm. “Name any brand name, and they will be stuck on one of those vessels.”

The Syrian government said over the weekend that it will begin rationing the use of fuel after the closure of the Suez Canal delayed the delivery of a critical shipment of oil to the war-torn nation.

And in Lebanon, which in recent months has suffered blackouts amid an economic and political crisis, local media were reporting that the country’s shaky fuel supply risks further disruption if the blockage continues.

With the backlog of ships now stuck outside the canal growing to more than 300 on Sunday, the threat to the oil supplies in those two countries was an early indication of how quickly the disruption to the smooth functioning of global trade could ripple outward and cause real world pain.

Virtually every container ship making the journey from factories in Asia to consumer markets in Europe passes through the channel. So do tankers laden with oil and natural gas.

The shutdown of the canal is affecting as much as 15% of the world’s container shipping capacity, according to Moody’s Investor Service, leading to delays at ports around the globe. Tankers carrying 9.8 million barrels of crude, about a tenth of a day’s global consumption, are now waiting to enter the canal, estimates Kpler, a firm that tracks petroleum shipping.

The Syrian Ministry of Petroleum and Mineral Resources said the blockage of the canal had “hindered the oil supplies to Syria and delayed arrival of a tanker carrying oil and oil derivations to Syria.”

Rationing was needed, the ministry said in a statement, “in order to guarantee the continued supply of basic services to Syrians such as bakeries, hospitals, water stations, communication centers, and other vital institutions.”