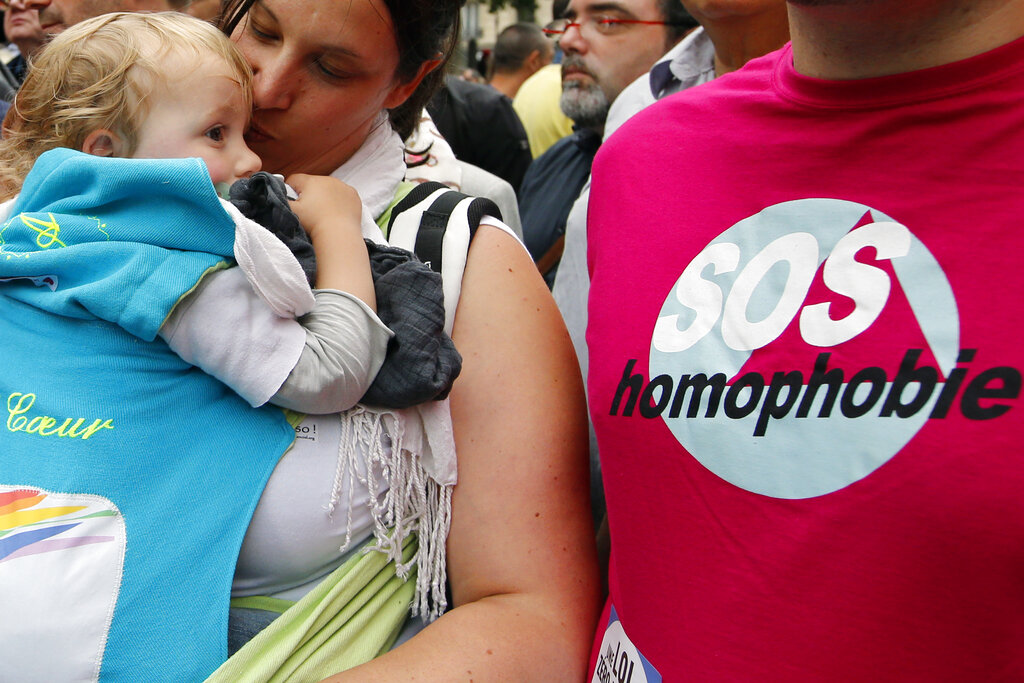 In this Saturday, June 28, 2014, file photo a woman kisses a baby next to a man wearing a shirt reading "SOS Homophobia" during the annual pride march in Paris. Single women and lesbians in France won't have to go abroad to have babies any more under a proposed new law
(Associated Press)
AP   |   Paris   |   Published 04.08.19, 09:15 AM

Single women and lesbians in France won't have to go abroad to have babies anymore under a proposed new law that would give them access to medically assisted reproduction for the first time.

French President Emmanuel Macron's government has presented a draft law on bioethics that includes expanding the eligibility for treatments such as artificial insemination and in vitro fertilization, or IVF. French law currently restricts assisted reproduction to infertile heterosexual couples.

The assisted reproduction bill is sure to prompt strong debate next month in parliament, where Macron's centrist party has a majority. It comes five years after mass protests against same-sex marriage in France, which was legalized, and as Macron's popularity has slipped due to yellow vest protests over his economic plans.

With the proposed bill, the French national health care system would cover the cost of assisted reproduction for all women, under an age limit yet to be set, for four rounds of treatments for each pregnancy. The bill also allows sperm donor anonymity to be lifted on demand by donors' children when they reach 18, instead of the strict donor anonymity that now exists in France. The proposed law will not lift the French ban on surrogacy.

The law would keep the babies and mothers from running afoul of the French legal system and give them access to the country's generous health care system.

The changes were a key demand of French LGBT rights groups after France legalized same-sex marriage in 2013.

'This simply is a measure of equality for French female citizens, whatever their sexual orientation is,' the Association of Gay and Lesbian Parents and Future Parents said in a statement.

While the French government says it is responding to changes in society, many conservative, religious or far-right activists strongly oppose the bioethics bill. Twenty conservative groups are already calling for a protest in October to denounce the measure that they say will create children without fathers. They also fear it will ultimately lead to the legalization of surrogate pregnancies.

The Demonstration for Everyone group, among the critics of the bill, said 'it's unfair to allow making children who are voluntarily deprived of a father.'

'Saying that you're creating new rights ... while ignoring the consequences for children on purpose is a revolting and despicable process, 'said group vice president Alberic Dumont.

Medically assisted reproduction for lesbian couples or single women or both is already legal in 18 of the European Union's 28 countries. French women now blocked from getting assisted reproduction at home often go to neighboring Spain or Belgium if they can afford it, where a single IVF round costs several thousand euros (dollars).

Virginie, 36, who lives in the southern city of Marseille, just got married with her wife Cecile in June. They decided not to wait for the adoption of the assisted reproduction law to try to have a baby, fearing the parliament debate could last months and getting access to the procedure could take many more months.

Instead, they chose to use donor sperm delivered from Denmark by mail for 1,000 euros ($1,112). The process is illegal in France, which is why Virginie asked not to be identified by her last name.

'If that first try doesn't work, we are considering using the new French law,' she told The Associated Press.

Virginie, who plans to carry the child, said it's difficult knowing they are doing something illegal. Her wife will also face expensive legal bills after the birth to adopt the child.

Virginie thinks the proposed law will help many French women but fears it could trigger homophobic reactions, including a potential reluctance from some French medical staff about implementing the measures.

Amandine Zevolino, 35, lives in Montpellier in southern France, where she has been married to her wife Camille for a year and a half. She first went to Spain to try to have a baby, but didn't feel comfortable with the donor anonymity there and the commercial aspect of the donor sperm process.

She finally decided to perform an at-home insemination with the help of a friend who agreed to be the sperm donor.

'We did a contract, even if we know it doesn't have any legal value,' she said. 'If it works, the child will know how he/she came to the world.'

She is still hesitating about telling French medical workers the truth. The situation 'forces us to lie,' she lamented.

Zevolino believes the parliament debate will ignite political tensions in France but she hopes the new law will help French society become more accepting of parenthood for lesbians or single mothers.

'Usually in France on that kind of issue, once the law is passed, it's definitive,' she said.

India abstains on LGBT rights at UN, but politicians speak up for equality