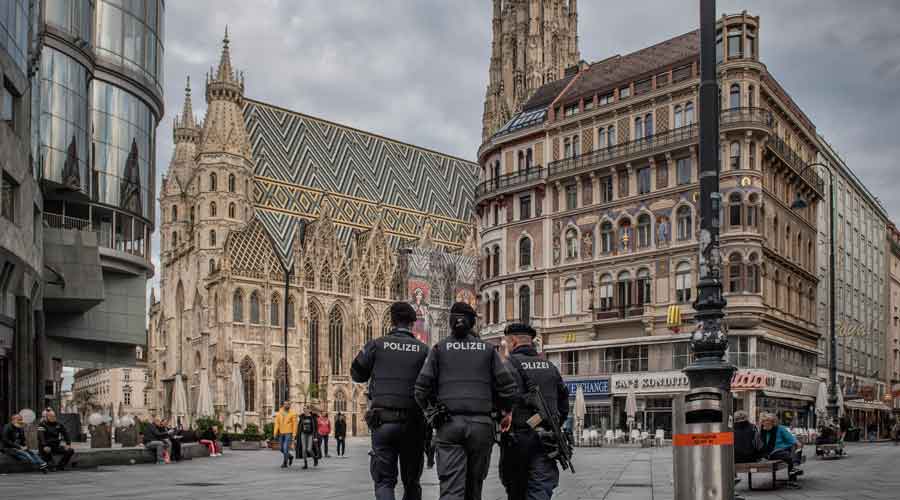 Austrian police were hunting for other suspects on Tuesday after at least one gunman killed four people in a rampage in the heart of Vienna overnight.

Police killed one gunman wearing an explosive belt that turned out to be fake. Authorities identified him as a 20-year-old convicted jihadist, and said they could not rule out the possibility that other shooters were still on the loose.

Chancellor Sebastian Kurz pledged in a televised address to “hunt down the perpetrators and those who stand behind them”.

An elderly man and woman, a young passer-by and a waitress had been killed in cold blood, and some of the 14 wounded victims were fighting for their lives, he said.

“The attack yesterday (Monday) was clearly an Islamic terror attack,” Kurz added. “This is not a conflict between Christians and Muslims or between Austrians and migrants. No, this is a fight between the many people who believe in peace and the few (who oppose it). It is a fight between civilisation and barbarism.”

The interior ministry said Fejzulai, a dual citizen of Austria and North Macedonia, had been sentenced to 22 months in jail in April 2019 for attempting to travel to Syria to join Islamic State, and had been released early in December.

Nehammer said Fejzulai had posted a photo on his Instagram account before the attack, showing himself with two weapons that he was believed to have used. There was no immediate claim of responsibility for the attack.

Videos circulated on social media of a gunman running down a cobbled street shooting and shouting. One showed a man gunning down a person outside what appeared to be a bar on the street where the synagogue is located, then returning to shoot the injured person again.