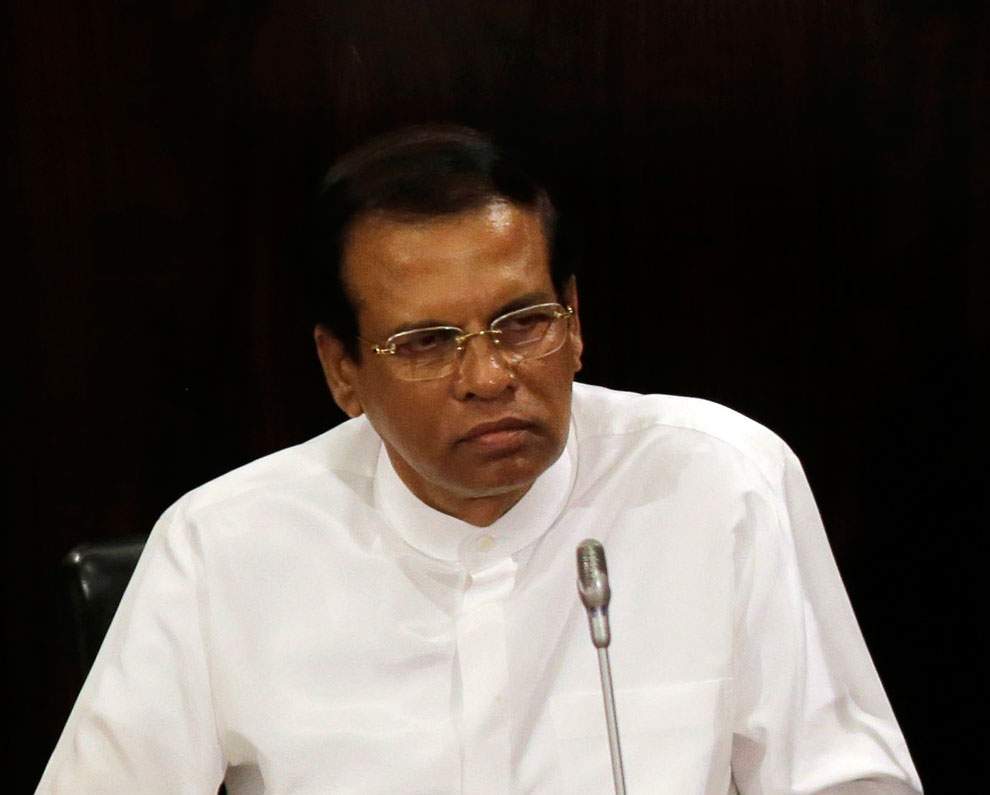 Sri Lankan President Maithripala Sirisena said a foreign mastermind may have planned the Easter Sunday bombings, claimed by the Islamic State, telling the militant group to “leave my country alone”.

Sirisena also warned it may be possible the Islamic State had launched a “new strategy” by targeting smaller countries, Sky News said on Wednesday.

A government source told Reuters on Tuesday that police and other security forces across the Buddhist-majority country had been ordered to remain on high alert because the militants were expected to strike again, before Ramazan which starts on Monday.

Sirisena said authorities were aware of “a small group” of Sri Lankans who had travelled abroad to receive training from the Islamic State over the past decade.

Investigations revealed the bombs used in the Easter Sunday attacks were made locally, the President said in the interview. The suicide bombings on hotels and churches killed more than 250 people, including 40 foreign nationals.

On Monday, the Islamic State’s media network published a video message purporting to come from its leader, Abu Bakr al-Baghdadi, which would be his first appearance since declaring the extremists’ now-defunct “caliphate” five years ago.

In the video, a bearded man with Baghdadi’s appearance says the Sri Lanka bombings were the Islamic State’s response to losses in its last territorial stronghold of Baghouz in Syria.

In the Sky News interview, Sirisena said he had a message for the Islamic State: “Leave my country alone.”

Sri Lankan authorities have previously said that they suspect the attackers had international links, although the precise nature of those connections are not known. The FBI and the Interpol, as well as other undisclosed foreign agencies, are helping Sri Lanka with the probe.

Local intelligence officials believe that Zahran Hashim, a Tamil-speaking preacher from the east of the Indian Ocean island country, may have been a key player in plotting the Easter bombings. Officials believe he was one of nine suicide bombers.

Four oceanic scientists were among the six Chinese nationals killed during the Easter Sunday bomb blasts in Sri Lanka, the Chinese embassy in Colombo said.

The deceased included Li Jian, 38, and Pan Wenliang, 35, who were senior engineers at the South China Sea Institute of Oceanology of the Chinese Academy of Sciences (SCSIO).

Two others, Li Dawei, 30, and Wang Liwei, 26, were from the First Institute of Oceanography under the ministry of natural resources, state run Global Times reported on Wednesday.

Websites of both the institutes turned black and white to mourn the dead scientists.

Li, along with four other scientists, arrived at the Kingsbury Hotel in Colombo on April 18 and 19, respectively. They were supposed to participate in a joint scientific cooperation between China and Sri Lanka, the SCSIO said.

The embassy said another five people from the Chinese Academy of Sciences were injured during the explosions. They have returned to China for further treatment, state run China Daily reported.

They had travelled to Sri Lanka in the middle of April for research purposes, it said.

The series of coordinated attacks that ripped through three churches and luxury hotels claimed 253 lives and injured over 500 others.

The Lankan foreign ministry has confirmed the death of 42 foreign nationals, including 11 Indians, in the blasts.

A total of 106 suspects, including a Tamil medium teacher and a school principal, have been arrested in connection with the Easter Sunday blasts.