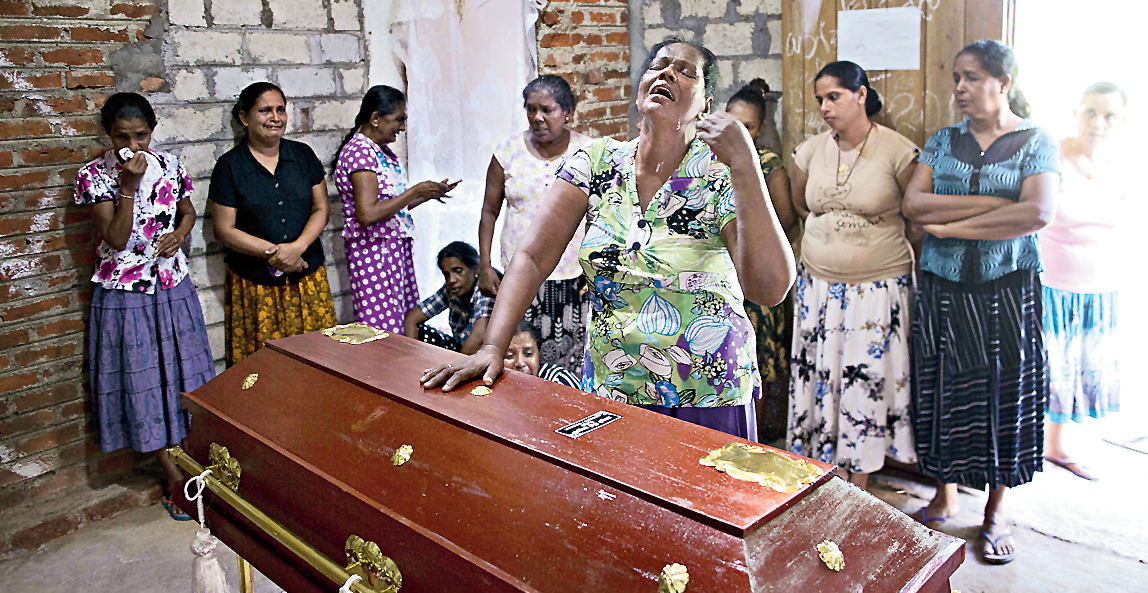 As the authorities investigate the bombings in Sri Lanka on Easter Sunday, their focus has centred on National Thowheeth Jama’ath, a little-known group that experts said promotes Islamist terrorist ideology.

No one has claimed responsibility for the suicide attacks, which killed at least 290 people, and the Sri Lankan authorities have so far not identified any group as being behind them, even as they have arrested two dozen suspects.

But 10 days before the attacks, a police official sent an advisory to the security authorities warning of a possible threat to churches by National Thowheeth Jama’ath.

Prime Minister Ranil Wickremesinghe said on Sunday that he and other top government officials had not been informed of the threat, and that “we must look into why adequate precautions were not taken.”

Until now, National Thowheeth Jama’ath was known mainly in Sri Lanka for vandalising Buddhist statues. In 2016, its secretary, Abdul Razik, was arrested on charges of inciting racism.

But while Sri Lanka, an island nation in the Indian Ocean, was ravaged by decades of civil war that ended in 2009, it has little history of militant Islamist violence.

In that internecine conflict, the Sri Lankan government, largely led by a Buddhist elite, put down a rebellion by ethnic Tamils, who are primarily Hindu but also include Muslims and Christians.

The goal of National Thowheeth Jama’ath is not insurrection, said Anne Speckhard, the director of the International Center for the Study of Violent Extremism. Instead, it aims to spread the global extremist movement to Sri Lanka and to create hatred, fear and divisions in society.

“It is not about a separatist movement,” she said. “It is about religion and punishing.”

The coordinated suicide bombings on Sunday, targeting members of Sri Lanka’s Roman Catholic minority and guests at hotels favoured by foreign tourists, were similar to those carried out elsewhere by major Islamist militant groups, Speckhard said.

“These attacks appear to be quite different and look as if they came right out of the ISIS, al Qaida, global militant extremist playbook, as these are attacks fomenting religious hatred by attacking multiple churches on a high religious holiday,” she said.

The Tamil Tigers were among the first groups in the world to use suicide bombings as a common tactic. The civil war ended a decade ago after a large-scale operation by the army that defeated the Tamil Tigers and killed their leader.

Speckhard contrasted the attacks by Tamil guerrillas with those attributed to National Thowheeth Jama’ath. Unlike the bombings on Sunday, she said, those during the civil war were part of a nationalist or ethnic separatist movement, and they mostly targeted political leaders rather than religious ones.

National Thowheeth Jama’ath is a small but violent group of young Muslims that started at least three years ago in eastern Sri Lanka, far from the country’s more cosmopolitan western and southern coasts. Until this month, the group was generally perceived as anti-Buddhist, counter-terrorism experts said.

Radical groups like al Qaida also have experience in organising and carrying out simultaneous suicide attacks — most notably those in the US on September 11, 2001.

Sectarian divisions are ripe for exploitation in Sri Lanka, whose ethnic Sinhalese majority is mostly Buddhist. Sri Lankan Muslims, who make up about one-tenth of the population and mostly belong to the Tamil ethnic group, have a long history of conflict with the country’s Buddhists and Hindus, said Brahma Chellaney, a professor of strategic studies at the Centre for Policy Research in New Delhi.

The conflict stems partly from statues and other human portrayals of Buddhist and Hindu deities.

In recent years, Buddhist extremist groups have sprung up among the Sinhalese, who make up nearly three-quarters of the Sri Lankan population. The groups seek to protect statues of Buddha from desecration and make Buddhism more central to Sri Lankan life, but they have also fomented violence.

Last year, the Sri Lankan government declared a nationwide state of emergency after mob attacks against Muslims in the central district of Kandy. Until now, National Thowheeth Jama’ath was known mainly for vandalising Buddhist statues. In November 2016, its secretary, Abdul Razik, was arrested on charges of inciting racism.

Four months later, the group was involved in a violent clash in Kattankudy, a mostly Muslim community near the eastern city of Batticaloa, where one of the church bombings took place on Sunday.

Three people were hospitalised and 10 were arrested, according to local news reports.

Chellaney noted that there was also a large group called Thowheeth Jama’ath in the southeastern Indian state of Tamil Nadu, which lies across a strait from Sri Lanka and has a large Tamil population.

Smaller chapters with the same name appear to have been set up in Sri Lankan communities in other countries, he said, often funded by groups in the Persian Gulf and subscribing to Wahhabism, an austere form of Islam that has its roots there. Chellaney described them as “sister organisations” but said the links among them were unclear.

The presence of mostly young people with deep roots in the community but no strong, mature leaders would make it similar to other local groups in the Muslim world with which the Islamic State has tried to form affiliations.

Scott Stewart, the vice-president of tactical analysis at Stratfor, a geopolitical consulting firm based in Texas, noted that the attackers were unusually successful for a group with no track record of large-scale assaults.

The initial evidence showed that all seven suicide vests detonated. That is certain to worry law enforcement agencies. Initial efforts by small, home-grown extremist groups are usually marked by some degree of failure. Some of the bombs fail to detonate entirely. Others explode early or late, and still others cause smaller blasts than their builders intended.

Whoever designed the suicide vests used in the Easter Sunday blasts showed considerable expertise, he said, and photographs indicate that the bomb-maker had access to a lot of military-grade high explosives. But others said that it was now much easier for relatively unknown to groups to be successful on their first try “in this age of digitally shared terrorist strategies and tactics”.