Blast may have been caused by car bomb; target appeared to be MP’s residence 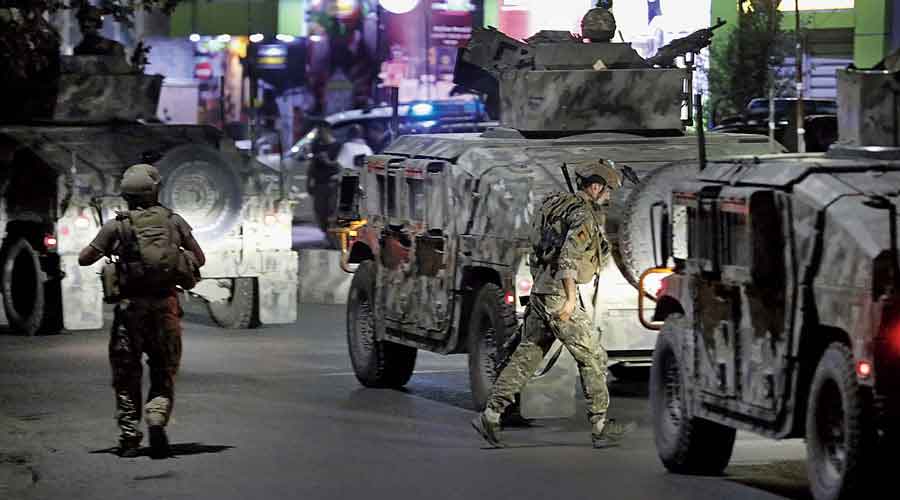 A senior security official said the blast appeared to have been caused by a car bomb and the apparent target was the residence of a member of parliament.

Two gunmen were still in the area and clashing with Afghan security forces, the official said. Several homes belonging to Afghan officials, lawmakers and prominent residents were under siege in the continuing clashes, residents said.

The city’s Emergency Hospital said in a tweet it had so far received six people wounded in the attack.

Minutes after the blast hundreds of civilians in Kabul came out on to the streets to express their support for Afghan government forces and opposition to the Taliban.

The overnight march spilled across the city with mostly men and some women joining in the demonstrations, carrying candles and Afghan flags to signal united opposition to the hardline Islamist group. “The whole world can choose to be silent about what is going on in Afghanistan but we can’t and won’t stay quiet anymore... we will stand side by side with our security forces until our last breath,” said a demonstrator in Kabul on condition of anonymity.

Last week residents in western Herat braved the streets despite nearby fighting to protest against the Taliban. Other cities quickly organised to join the chant from their homes in the evenings, as a message of support for embattled security forces.

Clashes between Afghan forces and the Taliban have intensified across the country with the insurgent group gaining control over check points, trading posts and infrastructure projects.

Afghan forces appealed to residents of the southern city of Lashkar Gah to leave their homes and stay away from areas where the Taliban were taking control, as they intend to launch operations against the group.

The Taliban said their fighters in Kabul killed a district governor of central Maidan Wardak province on Tuesday, the latest in a series of killings by the insurgent group aimed at eliminating senior government officials and social activists.

The Taliban pressed ahead with their advances in southern Afghanistan on Tuesday, capturing nine out of 10 districts of the Helmand provincial capital, residents and officials said. Afghan government forces launched airstrikes, backed by the US, in a desperate effort to defend Lashkar Gah.

The fall of Lashkar Gah would be a major turning point in the offensive the Taliban have waged over the past months as US and Nato forces complete their pullout from the war-torn country. It would also be the first provincial capital captured by the Taliban in years.

Residents of the city, speaking to The AP over the telephone, said the fighting has them trapped, hunkered down inside their homes and unable to step out for basic supplies.