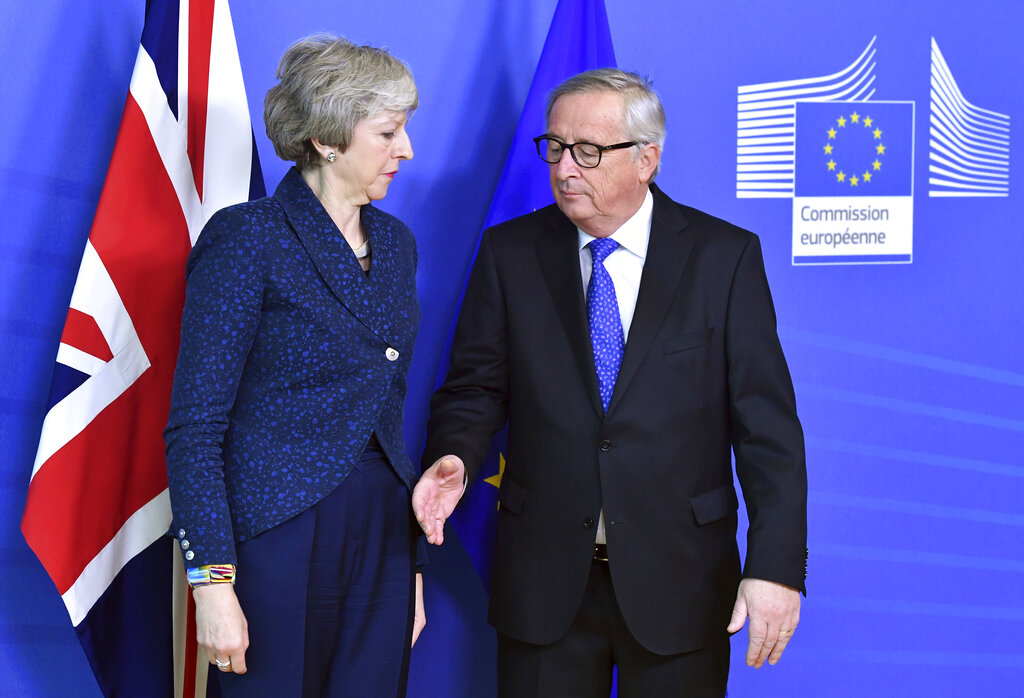 The European Union on Tuesday warned British Prime Minister Theresa May that her trip to EU headquarters to seek an elusive breakthrough in the Brexit negotiations stands no chance of success when it comes to her most important demand.

Reinforcing the message, EU Commission President Jean-Claude Juncker made it clear that he had little to no hope that something fruitful would emerge during their evening talks Wednesday and that the stalemate between Britain and the 27 other EU nations would likely continue.

'There is not enough movement for me to able to assume that it will be a productive discussion,' Juncker told reporters in Stuttgart, Germany. 'I don't know what Mrs. May will tell me tomorrow.'

He added that, even after almost two years of talks, 'I don't know what our British friends actually want to have. In the British Parliament, there is always only a majority against something, there is never a majority for something.'

Earlier, Juncker's spokesman, Margaritis Schinas, had already warned that 'the EU27 will not reopen the withdrawal agreement,' a condition that many British lawmakers are insisting on before they back a Brexit deal to have Britain leave the bloc on March 29.

UK lawmakers' objections center on a provision for the border between the UK's Northern Ireland and Ireland. The mechanism, known as the backstop, is a safeguard that would keep the UK in a customs union with the EU to remove the need for checks along the Irish border until a permanent new trading relationship is in place.

May wants to change the deal's phrasing to make sure that a provision to ensure an open Irish border after Brexit would only apply temporarily.

But the EU refuses to budge and says the 585-page legally binding Brexit agreement is a take-it-or-leave-it document. It is willing to discuss other ways to find a compromise, but has challenged London to come up with concrete proposals.

The British government appears to be pinning its hopes in Attorney-General Geoffrey Cox, who has been trying to come up with new wording that can satisfy both Britain and the EU and could produce an addendum or something 'clarifying' the backstop.

Schinas said the talks this week seek 'to see whether a way through can be found that would gain the broadest possible support in the UK parliament and respect the guidelines agreed' by the EU nations.

The Brexit deal negotiated between May and the EU last year — and rejected by Britain's Parliament last month — includes a long transition period after Britain leaves the bloc on March 29 to give time for new trade relations to be set up.

If the UK Parliament does not agree on the deal before March 29, Britain risks a chaotic departure that could be costly to businesses and ordinary people on both sides of the Channel.

The uncertainty has already led many firms to shift some operations abroad, stockpile goods or defer investment decisions.

On Tuesday, Honda announced it will close its only UK plant in 2021. The automaker said the decision was not directly related to Brexit, but UK Business Secretary Greg Clark said 'decisions like Honda's this morning demonstrates starkly how much is at stake.'

Clark, a leading pro-EU voice in May's Cabinet, said the Brexit-related uncertainty facing businesses was 'unacceptable' and 'needs to be brought to a conclusion.' Clark said businesses could not wait until 'the last minute on March 28' for certainty.

With less than six weeks to go until March 29, chances are growing that Britain will seek to postpone its departure from the EU.

Business Minister Richard Harrington told a manufacturers' conference Tuesday that if May could not get her deal through Parliament on a second try before March 29, there would likely be 'a small extension' to the Brexit deadline so Parliament could come up with a new plan.

But delaying Brexit would require the EU's approval — and if it is extended too far, that would force Britain to take part in the May 23-26 EU-wide election for the European Parliament. Juncker told the German daily Stuttgarter Zeitung on Tuesday that such a scenario was 'difficult to imagine.'

Juncker said it's up to Britain to decide whether it wants to request a delay to the Brexit date, but that Britain's departure should take place before the newly elected European Parliament gathers in early July.