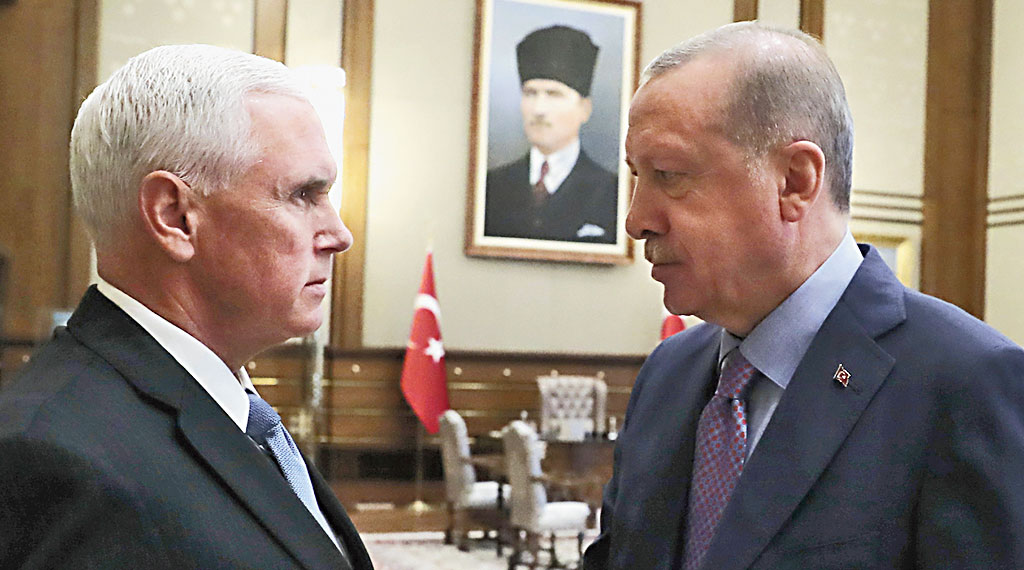 President Putin is to oversee the carving up of northern Syria, as President Erdogan snubbed a US intervention on Wednesday and instead sought Moscow’s help to end the crisis caused by his incursion across the border.

Erdogan will travel to Moscow to meet Putin before the end of the month to discuss his war with the Syrian Kurds. Those talks will come before his planned meeting with President Trump on November 13.

According to Sergey Lavrov, the Russian foreign minister, the Moscow meeting will address the task of “ensuring the sovereignty and territorial integrity of the Syrian Arab Republic while carrying on the fight against remaining terrorist groups”.

Trump claimed on Wednesday to be unconcerned at Moscow moving to fill the vacuum left by the US exit.

“Syria may have some help with Russia and that’s fine,” he said. “It’s a lot of sand.”

He added that his decision to remove US troops was “strategically brilliant” and that the Kurds, who helped to defeat Islamic State, were “no angels”.

The announcements and snubs highlighted Trump’s deteriorating influence over Turkey, handing Putin a prime opportunity to draw Ankara even further into his fold, deepening the rift at the heart of the Nato alliance and stamping out the last vestiges of US influence in Syria.

Russia also helped to mediate a deal between the Kurds and the Assad regime. This allowed the Syrian President’s forces to move into Kurdish areas to help to hold off the Turkish advance to create what it calls a “safe zone” 20 miles deep along 300 miles of border.

Russia has insisted that it will not allow Turkish and Syrian regime forces to clash, meaning Putin will be the final arbiter of Erdogan’s success.

The Kurdish-led Syrian Democratic Forces (SDF) confirmed that under the deal with President Assad, regime forces would take over the whole border area. However, a senior Kurdish official told The Times that the deal also allowed the SDF to continue to try to drive Turkish-backed forces out of Syria, with regime support.

Aldar Xelil, an official with the PYD, the political wing of the YPG, the Kurdish militia that is the SDF’s dominant force, admitted that Damascus had made no promises about the extent of Kurdish autonomy that would be granted once the dust had settled.

“The regime’s army will be deployed all along the border, and will have to defend itself in the event of any attack,” he said. “We hope that this military understanding can facilitate the resolution of the Syrian crisis, and define the status of the local autonomous administrations in the Syrian Constitution and their relations to Damascus. But all these points will be discussed later.”

He said Russia was now the key player.

“Russia has influence over Turkey and the regime, and interests with both of them,” he said.

“It uses Turkey as leverage over the US and it did not want to abandon the regime.”

Relations between Turkey and Russia have been warming since 2016, when they were reconciled after a diplomatic spat.