Advertisement
Home / World / Is hunger being used as a weapon in the Ukraine war?
Food exports from Russia are not sanctioned

Is hunger being used as a weapon in the Ukraine war? 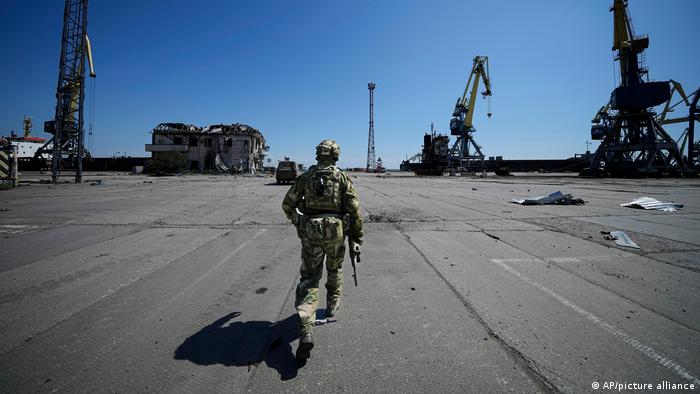 Are food exports being misused as a "quiet weapon" in Russia's war against Ukraine?

Claim: Russia is weaponizing food supplies in its war against Ukraine. "There is no question that food is being used as a weapon of war in many different ways," says World Food Program (WFP) chief David Beasley.

Since the outbreak of the Ukraine war, WFP Executive Director David Beasley has warned of a global hunger crisis. In an interview on US TV network CBS' "Face the Nation" show on April 17, he answered "yes" to the question of whether Putin was using hunger as a weapon, stating: "There's no question that food is being used as a weapon of war in many different ways."Just days later at a UN Security Council meeting on May 19, Beasley warned: "Failure to open the ports in the Odesa region is a declaration of war on global food security and will result in famines, destabilization and mass migration around the world."

WFP Executive Director David Beasley says he is “not confident” that food supply lines to Ukraine can be maintained, pointing specifically to problems providing assistance to war-torn areas like Mariupol.

Watch the full interview this Sunday at 10:30a E.T. pic.twitter.com/CWRobx1J37

A temporary halt in Russia's grain exports has further exacerbated the situation. The world's largest wheat exporter suspended grain exports from late March through the end of June.Former Russian president and senior security official Dmitry Medvedev called food exports a "quiet weapon" in the fight against Western sanctions, indirectly confirming Beasley's statements. "Many countries depend on our supplies for their food security," Medvedev wrote on his Telegram channel on April 1. "It turns out that our food is our quiet weapon," he wrote. "Quiet but ominous."

Per Brodersen, director of the German Agribusiness Alliance at the German Eastern Business Association accuses Moscow of using this weapon deliberately: "Uncertainty is driving up prices," Brodersen said in an interview with DW. "Countries that hoard grain can sell it later at a higher price."

Who is laying mines in the Black Sea?

Claim: "Russia is not the one refusing to open 'Ukrainian ports,' but rather it's Ukraine that refuses to remove mines from ports to ensure a safe exit of ships," says Russia's UN Ambassador Dmitry Polyansky.

The war in Ukraine has led to the closure of key ports in the Black Sea and the Sea of Azov, resulting in a drastic drop in grain exports from Ukraine. In statements to the International Maritime Organization (IMO), both Ukraine and Russia accuse each other of laying underwater mines in the sea, paralyzing international shipping.

Ukraine's Ministry of Infrastructure issued a decree on April 28 closing the seaports of Berdyansk, Kherson, Mariupol, and Skadovsk because of inadequate security.

Reacting to the closures, Russia's ambassador to the UN, Dmitry Polyansky, wrote on Twitter: "It's egregious that some #SecurityCouncil members continued to appeal to us today at #foodsecurity debates to 'open Ukrainian ports' knowing that it's #Ukraine️ who refuses to demine them and allow safe passage of ships which we guarantee. What a hypocrisy!"n a report by the AFP news agency published in The Moscow Times on May 20, a spokesman for the French army suggested that both Russia and Ukraine had laid mines in the Black Sea and port basins.

It’s egregious that some #SecurityCouncil members continued to appeal to us today at #foodsecurity debates to “open Ukrainian ports” knowing that it’s #Ukraine️ who refuses to demine them and allow safe passage of ships which we guarantee. What a hypocricy! #FoodShortage

Are sanctions to blame for high grain prices?

Claim: "The disruption of trade, logistics and financial chains and the resulting rise in global food prices is a direct result of the senseless buildup of unilateral anti-Russian restrictions and threats of further escalation of sanctions pressure on Russia," Russian Foreign Ministry spokeswoman Maria Zakharova said at a May 18 press conference in Moscow.

Accusing the West of "spreading lies," Zakharova says Russia is not responsible for global food shortages. As early as mid-2020, World Food Program Executive Director David Beasley warned of the threat of "biblical famine," Zakharova said. "Western sanctions against Russia have exacerbated these trends."German Foreign Minister Annalena Baerbock called the Kremlin's accusations a "disinformation campaign" and reiterated at the G7 foreign ministers meeting in Berlin in mid-May that "there are no sanctions against grain and humanitarian aid."

The World Food Program has confirmed that. "Food exports from Russia are not sanctioned," spokesman Martin Rentsch told DW. However, it is "not economical to buy from there because prices are high and there are administrative hurdles," he added.

The Russia Union of Grain Exporters, Rusgrain Union, which says it is supported by Russia's Ministry of Agriculture, also reiterates this: "We stress that sanctions and export controls against Russia do not or will not affect essential food exports and agricultural products for developing countries," reads a tweet from the association.

We underscore that our sanctions and export controls against Russia do not and will not target essential exports of food and agricultural inputs to developing countries and to this end include measures to avoid any negative consequences for the production and distribution of food https://t.co/OppxfmXMyO

Can Ukrainian grain supplies be replaced?

Claim: "The positive news is that other suppliers can step in. The gap can apparently be filled," says Per Brodersen, director of the German Agribusiness Alliance at the German Eastern Business Association.

Ukraine is one of the world's largest producers and exporters of grains and oils. In view of rising food prices and collapsing Ukrainian exports, there are growing fears of famine in poorer countries, prompting the World Food Program to look for new suppliers.

"Global market prices are also causing huge problems and increasing the cost of our operations," WFP spokesman Martin Rentsch told DW. "Ukraine was our largest source of food in terms of volume. But we are able to find other sources of supply, for example in Indiaor Canada."

The Leibniz Institute of Agricultural Development in Transition Economies (IAMO) also assumes that "additional exports from other regions, including India, the USA and Australia, will probably largely compensate for the lower supplies from Russia and Ukraine," IAMO Director Thomas Glauben wrote in a statement.

Per Brodersen, director of the German Agribusiness Alliance says it's a bright spot in an otherwise bleak scenario. "The gap can apparently be filled," he said. "Other suppliers can step in."