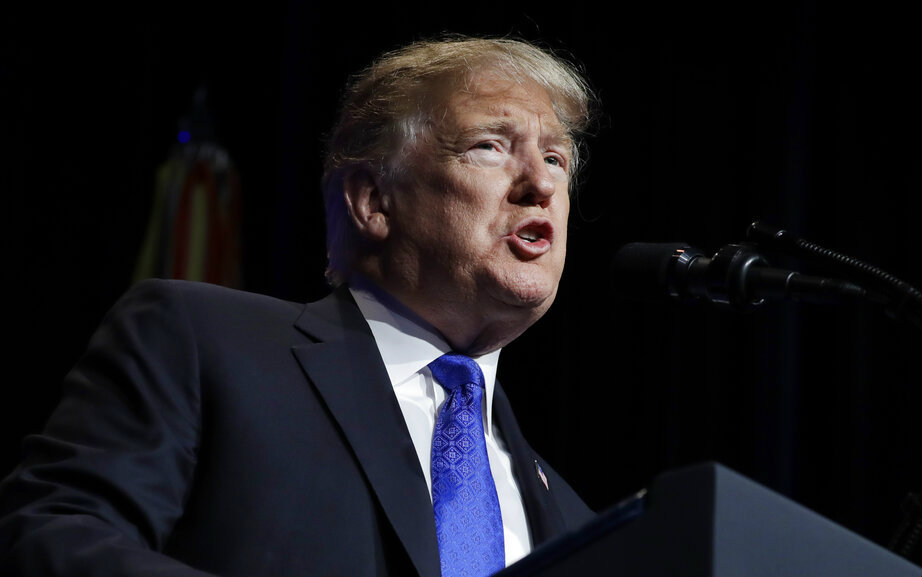 President Donald Trump said he'll be making a 'major announcement' on the government shutdown and the southern border on Saturday afternoon as the standstill over his border wall continues into its fifth week.

Democrats are now proposing hundreds of millions of dollars for new immigration judges and improvements to ports of entry from Mexico but nothing for the wall, a House aide said, as the party begins fleshing out its vision of improving border security.

After days of bitter clashes between Trump and House Speaker Nancy Pelosi, it was unclear if the twin developments represented serious steps toward resolving the nasty partisan fight or posturing. But they were the first tangible signs of movement in a dispute that has caused a partial government shutdown, which on Saturday was entering its record 29th day.

Trump's refusal to sign spending bills that lack $5.7 billion he wants to start constructing that wall, which Democrats oppose, has prompted the shutdown.

The White House declined to provide details late on Friday about what the President would be announcing. But Trump was not expected to sign the national emergency declaration he's been threatening as an option to circumvent Congress, according to two people familiar with the planning.

Instead, Trump was expected to propose the outlines of a new deal that the administration believes could potentially pave the way to an end to the shutdown, according to one of the people. They were not authorised to discuss the announcement and spoke on condition of anonymity.

The move, amid a shutdown that has left hundreds of thousands of federal workers without paychecks, represents the first major overture by the President since January 8, when he delivered an Oval Office address making the public case for his border wall. Democrats have said they will not negotiate until the government reopens, raising questions about how Trump might move the ball forward.

Democrats were proposing $563 million to hire 75 more immigration judges, who currently face large backlogs processing cases, and $524 million to improve ports of entry in Calexico, California, and San Luis, Arizona, the Democratic House aide said. The money is to be added to spending bills, largely negotiated between the House and Senate, that the House plans to vote on next week.

In addition, Democrats were working toward adding money for more border security personnel and for sensors and other technology to a separate bill financing the Department of Homeland Security, but no funds for a wall or other physical barriers, the aide said.

It was possible Democrats would unveil that measure next week as the cornerstone of their border security alternative to Trump's wall, the aide said. Earlier on Friday, Rep. Lucille Roybal-Allard, D-Calif., who chairs the House Appropriations Committee's homeland security subcommittee, said in an interview that some Democrats were asking leaders, 'What is our plan?'

The aide spoke on condition of anonymity because he wasn't authorized to discuss the details publicly. The Democrats' spending plans were first reported by The New York Times.

In a video posted on his Twitter feed late on Friday, Trump said both sides should 'take the politics out of it' and 'get to work' to 'make a deal.' But he also repeated his warnings, saying: 'We have to secure our southern border. If we don't do that, we're a very, very sad and foolish lot.'

White House spokesperson Sarah Huckabee Sanders said only that Trump was 'going to continue fighting for border security' and 'going to continue looking for the solution' to end what the administration had repeatedly referred to as a 'humanitarian and national security crisis at the border.'

While few would argue that a humanitarian crisis is unfolding at the US-Mexico border, as the demand for entry by migrants and the Trump administration's hardline response overwhelm border resources, critics say Trump has dramatically exaggerated the security risks and argue that a wall would do little to solve existing problems.

Trump will be speaking from the Diplomatic Room at 3 pm.

Trump's Friday evening tweeted announcement came after Pelosi, D-Calif., on Friday canceled her plans to travel by commercial plane to visit U.S. troops in Afghanistan, saying Trump had caused a security risk by talking about the trip. The White House said there was no such leak.

It was the latest turn — and potentially the most dangerous — in the high-stakes brinkmanship between Trump and Pelosi that has been playing out against the stalled negotiations over how to end the partial government shutdown.

And it showed once again the willingness of the former hard-charging businessman to hit hard when challenged, as he was earlier this week when Pelosi suggested postponing his State of the Union address until after the shutdown.

It was an unusually combative week between the executive and legislative branches.

Tensions flared when Pelosi suggested Trump postpone the annual State of the Union address, a grand Washington tradition — and a platform for his border wall fight with Democrats — that was tentatively scheduled for January 29.

Trump never responded directly. Instead, he abruptly canceled Pelosi's military flight on Thursday, hours before she and a congressional delegation were to depart for Afghanistan on the previously undisclosed visit to US troops.

Trump belittled the trip as a 'public relations event' — even though he had just made a similar stop in a conflict zone during the shutdown — and said it would be best if Pelosi remained in Washington to negotiate to reopen the government.

Pelosi, undeterred, quietly began making her own preparations for the overseas trip.

But on Friday, Pelosi said her plan to travel by commercial plane had been 'leaked' by the White House.

'The administration leaked that we were traveling commercially,' Pelosi told reporters at the Capitol. She said it was 'very irresponsible on the part of the President.'

She said the State Department told her 'the president outing' the original trip made the scene on the ground in Afghanistan 'more dangerous because it's a signal to the bad actors that we're coming.'

The White House said it had leaked nothing that would cause a security risk.

Denying military aircraft to a senior lawmaker — let alone the speaker, who is second in line to the presidency after the vice-president, traveling to a combat region — is very rare.

Some Republicans expressed frustration. Sen. Lindsey Graham tweeted, 'One sophomoric response does not deserve another.' He called Pelosi's State of the Union move 'very irresponsible and blatantly political' but said Trump's reaction was 'also inappropriate.'