US: Diwali celebrations in New York; Kamala Harris and Trump to join

It all started from Times Square which was attended by the City Mayor, Senate Majority Leader Senator and India's Consul General in New York 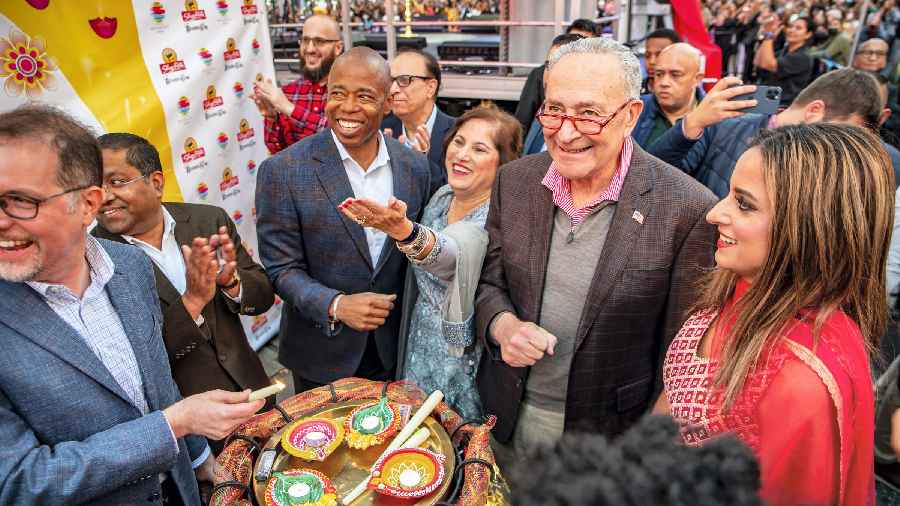 Diwali celebrations have started in the United States from the iconic Times Square in New York, with the US Vice President Kamala Harris and former president Donald Trump celebrating the festival of lights at their residences on Friday.

Eminent Indian-Americans from across the country started flying into the American Capital from Thursday night which now appears to be a week-long Diwali celebration by the Biden Administration and members of the Congress.

Harris and the Second Gentleman have invited scores of eminent Indian-Americans, diplomats and members of the administration for the Diwali celebrations at VP residence on Friday.

Three days later, US President Joe Biden and the First Lady Dr Jill Biden have invited Indian-Americans at the White House to celebrate the Diwali on Monday, October 24, itself. The Secretary of State Tony Blinken is hosting another Diwali party at the State Department with the diplomatic community on October 26.

Diwali is also being celebrated at the US Capitol which as usual is being attended by eminent lawmakers.

On Friday, Trump would be joined by around 200 Indian-Americans members of the Republican Hindu Coalition to celebrate Diwali at his residence in Mar-a-Lago in Florida. The event that is expected to last for a few hours on Friday night would have a Bollywood dance and guests would be served with Indian dishes.

Both Harris and Trump are expected to deliver addresses to the community at their respective residence. So does Biden and Blinken. Coming just two weeks ahead of the crucial mid-term polls, politicians across the aisle want to gain the attention of the influential Indian-Americans by celebrating the festival of lights in a big way.

This year it all started on October 15 from the iconic Times Square which among others was attended by the City Mayor Eric Adams, Senate Majority Leader Senator Chuck Schumer and India's Consul General in New York Randhir Jaiswal.

Adams announced that Diwali will be a public-school holiday in New York City starting in 2023. This sends a message about the significance of the city's inclusiveness and the "long overdue" step will encourage children to learn about the festival of lights, he told a gathering of several hundreds.

On this occasion, renowned Oncologist Dr. Dattatreyadu Nori was recognised and honoured for his lifetime excellent services to Health and Medicine by Mayor Eric Adam.

"We love our community, our Indian community, and we love that we all come together here in New York with our diversity," Senator Schumer said, adding that he has been celebrating the festival of Diwali with the Indian-American community in New York for many years.

South Asia Engagement Foundation has once collaborated with Durst Organisation to curate digital animation displaying Diwali imagery on the iconic World Trade Center.This digital display called All American Diwali will run continuously from October 22 to 24 from sunset until 2am.

As usual Diwali party is also being organised at several State Capitals and Governor House.