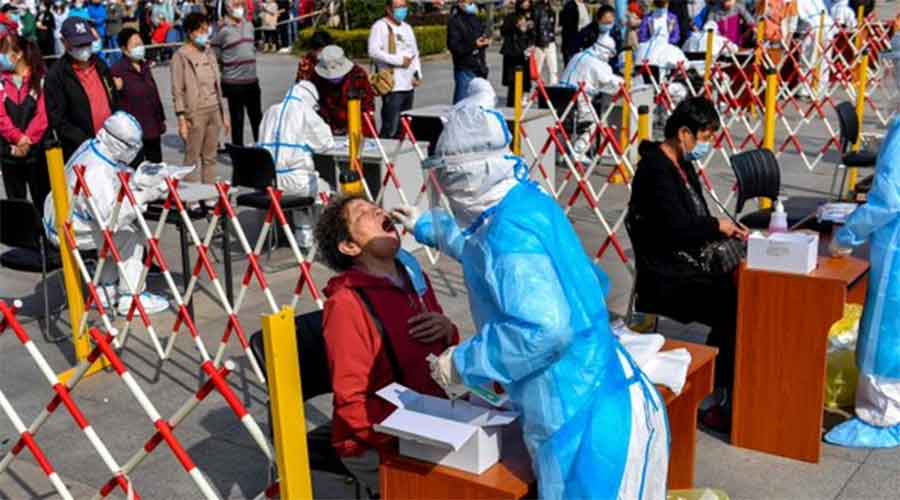 The government has previously led mass testing campaigns in Wuhan, the original centre of the outbreak, and the western region of Xinjiang.
Twitter/ @nytimes
New York Times News Service   |   New York   |   Published 13.10.20, 01:24 AM

The Chinese city of Qingdao is testing all of its 9.5 million residents after it recorded the country’s first locally transmitted cases of the virus in almost two months.

The authorities said that a dozen people in Qingdao, a seaside city in Shandong Province, had tested positive for the virus as of Sunday. Officials said the cases appeared to be linked to the Qingdao Chest Hospital, which has been treating people who test positive for the virus after arriving in China from abroad. The hospital has since been placed under lockdown.

In a sign of the growing alarm over the outbreak, the National Health Commission in Beijing said on Monday that it had dispatched a team to Qingdao to “guide local epidemic prevention and control work”.

The authorities in Qingdao have started a five-day campaign to test the city’s residents. Photographs on social media showed people lining up across the city for tests beginning late Sunday. At least one government notice described the exams as mandatory.

Testing has been crucial to Beijing’s efforts to contain the virus. The government has previously led mass testing campaigns in Wuhan, the original centre of the outbreak, and the western region of Xinjiang.