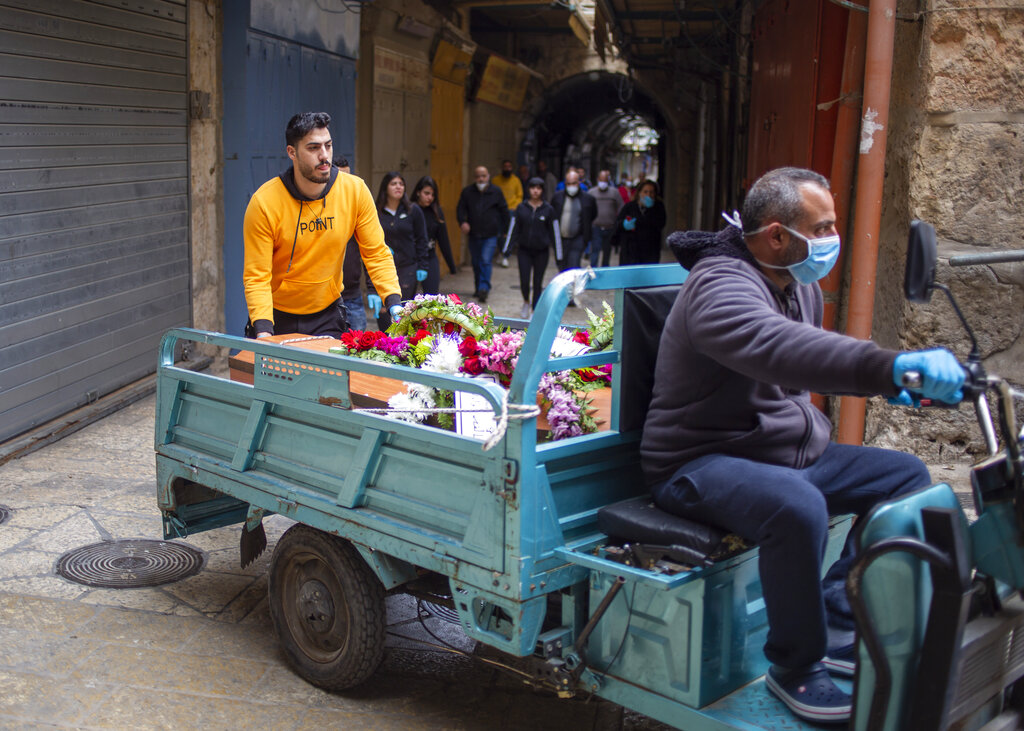 Christians carry a coffin during a funeral, amid a lockdown to help stop the spread of the coronavirus, in Jerusalem's Old City, on Holy Thursday, April 9
(AP)
Ronen Bergman/New York Times News Service   |     |   Published 13.04.20, 07:47 PM

When Israel’s health minister was found to be infected with the coronavirus early this month, all high-level officials in close contact with him were quarantined, including one who stood out: the director of the Mossad, the storied Israeli spy service.

Mossad officers, primarily associated with covert operations abroad in the name of protecting Israel, are not normally in the business of public health.

So Israelis were immediately intrigued.

Why would the Mossad director, Yossi Cohen, a widely respected figure in the country, have even been in the same room as the health minister, Yaakov Litzman?

Cohen’s powerful agency, it turns out, has been deeply involved in Israel’s fight against the virus, and has been one of the country’s most valuable assets in acquiring medical equipment and manufacturing technology abroad, according to Israeli medical and security officials.

As countries around the world compete ferociously for limited supplies during the pandemic, they are turning to any help available, and flexing their muscles unapologetically.

And with the Mossad having determined that Iran — struggling with its own coronavirus crisis — no longer represents an immediate security threat, the agency could afford to immerse itself in the health emergency, according to multiple people with knowledge about its operations.

Initial predictions for the toll of the virus in Israel were dire, though so far they have proved too pessimistic. With nearly 11,000 cases of the virus now confirmed and 103 deaths, Israel does not rank among the hardest-hit countries in the world.

“The peak expansion rate has been behind us for about two weeks now, and will probably wane almost completely within two weeks,” said an article published on Sunday by Prof. Isaac Ben Israel of Tel Aviv University.

But in early February, officials at Sheba Medical Centre, Israel’s biggest hospital, realised that they needed more ventilators and other gear. And around that time, Prof. Yitshak Kreiss, the director general of the hospital, met Cohen, the Mossad chief, at a private event involving a mutual friend — not unusual in a small country where senior figures often move in the same social circles.

By then, Cohen had already begun to assess how the Mossad could help the Israeli health system. Prof. Kreiss said he enumerated the most urgent equipment needs to Cohen, who obtained further lists from the health ministry, and the Mossad began activating its international network to find the items needed.

In early March, a command and control centre was set up to handle the distribution of medical gear across the country, with Cohen at its head and headquartered at Sheba. There were representatives from the Mossad, the ministry of defence purchasing division, and the military intelligence’s highly secretive Unit 81, which deals with the development of advanced espionage equipment.

Prof. Kreiss, a former brigadier general in the army and a former surgeon general for the military, said the Mossad had been pivotal in helping his institution secure vital medical equipment and expertise from abroad.

“It is only in Israel that the Sheba hospital could have enlisted the help of the Mossad,” he said in an interview. “Can you imagine Mount Sinai Hospital going to the CIA for help?” he added, referring to the New York medical centre.

Prof. Kreiss declined to say precisely how Mossad officers had helped the Israeli medical establishment or where the imported equipment came from. But according to six current or former Israeli officials with knowledge of the Mossad’s operations, the agency used international contacts to avert shortages that might have overwhelmed Israel’s health system.

The six people, who spoke on the condition of anonymity because the Mossad’s activities are classified, said the spy agency’s contacts had proved invaluable in enabling Israel to acquire ventilators and testing material that Litzman’s health ministry had been unable to secure.

These people would not confirm non-Israeli media reports that some of the items were acquired from neighbouring Arab nations.

But at least one senior Mossad official acknowledged in an interview with Ilana Dayan, host of Uvda, or “Fact”, Israel’s Channel 12 TV newsmagazine, that in some instances, the agency had acquired items that other countries had already ordered.

By the end of the first week of April, Cohen was confident that Mossad operatives had ensured Israel would possess enough ventilators to cope with the worst forecasts.

If Litzman, whose cavalier attitude towards the virus has been criticised, symbolises for some the shortcomings of the government’s response, for many Israelis the Mossad represents the opposite. Word of its assistance in fighting the pandemic has bolstered the Mossad’s image as among the country’s most admired government institutions.