With daily new infections levelling-off at an alarming higher mark, there is a deepening national sense that the progress made in fighting the pandemic is coming undone 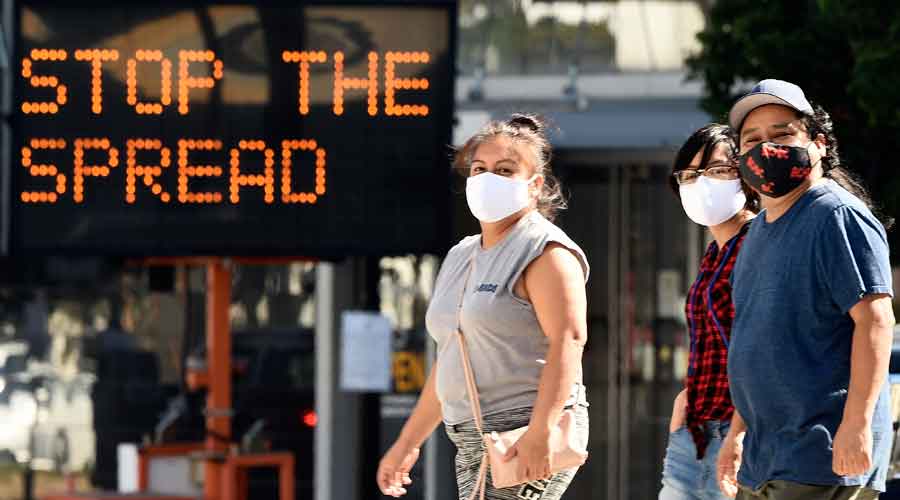 Pedestrians wear masks as they walk in front of a sign reminding the public to take steps to stop the spread of coronavirus in California
AP
Julie Bosman, Manny Fernandez, Thomas Fuller   |   Chicago   |   Published 03.08.20, 12:34 AM

First, the Pacific Northwest and the Northeast were hit hardest as the coronavirus tore through the nation. Then it surged across the South. Now the virus is again picking up dangerous speed in much of the Midwest — and in states from Mississippi to Florida to California that thought they had already seen the worst of it.

As the US rides what amounts to a second wave of cases, with daily new infections levelling off at an alarming higher mark, there is a deepening national sense that the progress made in fighting the pandemic is coming undone and no patch of the US is safe.

In Missouri, Wisconsin and Illinois, distressed government officials are retightening restrictions on residents and businesses, and sounding warnings about a surge in coronavirus-related hospitalisations.

In the South and the West, several states are reporting their highest levels of new coronavirus cases, with outbreaks overwhelming urban and rural areas alike.

Across the country, communities, including Snohomish County (Washington), Jackson (Mississippi) and Baton Rouge (Louisiana), have seen coronavirus numbers fall and then shoot back up.

In Illinois, governor J.B. Pritzker sounded an unusually sombre note last week as he delivered a warning that reverberated across the state: Even though Illinoisans had battled an early flood of coronavirus infections and then managed to reduce the virus’s spread, their successes were fleeting. As of Thursday, the state was averaging more than 1,400 cases a day, up from about 800 at the start of July.

“We’re at a danger point,” Pritzker said in Peoria County, where the total number of cases has doubled in the last month. Gone is any sense that the country may soon gain control of the pandemic. Instead, the seven-day average for new infections hovered around 65,000 for two weeks.

“There’s a sort of collective tiredness and frustration, and of course I feel it, too — we all feel it,” said County Judge Lina Hidalgo, the top elected official in Harris County, which includes Houston. “So it’s difficult to know that there’s no real end in sight.”

In communities that saw improvement in June, such as Milwaukee County in Wisconsin, there was a widespread feeling of relief, said Dr Ben Weston, the director of medical services for the Milwaukee County Office of Emergency Management.

“There was a sense of complacency, like, ‘We’re finally beyond this, it’s finally getting better,’” he said. “We were seeing our numbers go down, but the reason is because of physical distancing. It’s because people were being so careful. There was no reason to think that cases weren’t going to rise.”

In California, which has had over 500,000 cases, more than any other state, the reopening has proved disastrous. When the pandemic was ravaging the Northeast in March and April, California kept its daily case count around 2,000.

The state is now averaging more than four times as many cases — 8,500 a day. Los Angeles County and other Southern California counties account for the majority of the state’s infections, but the virus is now everywhere.

That notion was reinforced on Tuesday when health officials in one of the most remote parts of the state, Modoc County, which had been the last of California’s 58 counties without a known case, announced that the virus had arrived. A waitress at the Brass Rail, a Basque restaurant and bar, tested positive. The waitress and her husband recently returned from a trip to the Central Valley.

Businesses across the country have abandoned their own plans to return to normal in light of the virus’s resurgence.

A few places, including Arizona, South Carolina and Texas, have started to see new case reports drop after huge surges. California, Florida and Louisiana continue to report some of their highest daily totals of the pandemic.

The Rio Grande Valley in Texas is suffering through perhaps the worst current outbreak in the country, with hundreds of new cases and dozens of deaths a day. In more than half of states, outbreaks continue to grow.

In Missouri and Oklahoma, cases have grown to alarming levels, with both states now averaging more than 1,000 each day. And in Maryland, daily case numbers are ticking upward again after periods of sustained progress.

In the Northeast, once the virus’s biggest hot spot, cases are now increasing slightly in New Jersey, Rhode Island and Massachusetts.