China-centric WHO blew it: Trump 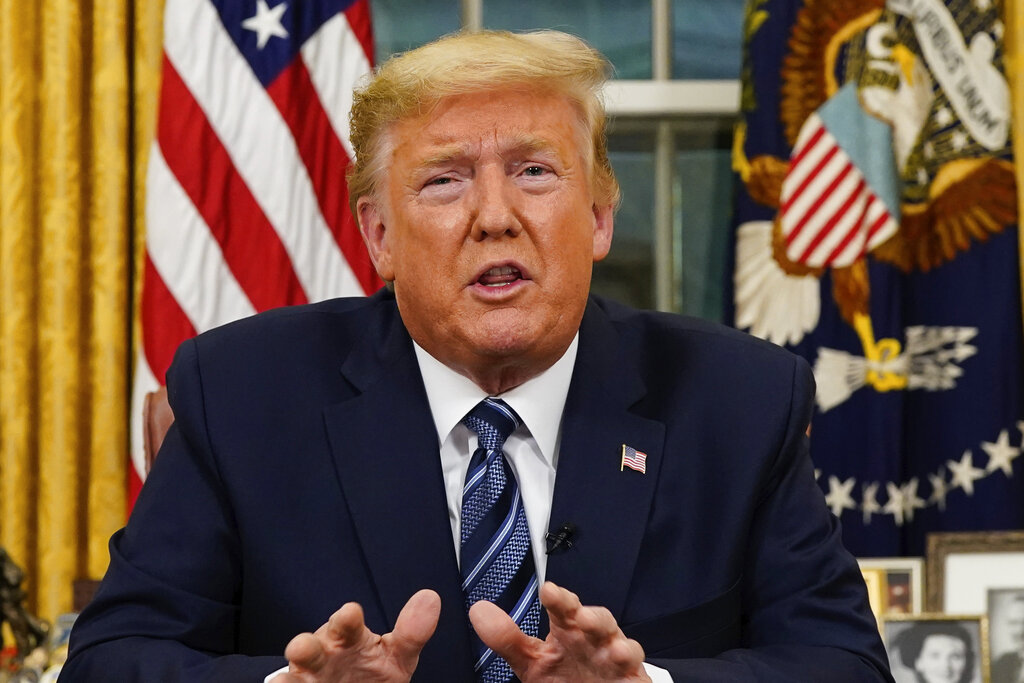 President Donald Trump speaks in an address to the nation from the Oval Office at the White House about the coronavirus
(AP photo)
Reuters   |   Washington   |   Published 08.04.20, 08:09 PM

US President Donald Trump sharply criticised the World Health Organisation on Tuesday, accusing it of being too focused on China and issuing bad advice during the new coronavirus outbreak and saying he would put a hold on US funding for the agency.

“The WHO really blew it,” Trump said in a Twitter post. “For some reason, funded largely by the United States, yet very China centric. We will be giving that a good look.

“Fortunately I rejected their advice on keeping our borders open to China early on. Why did they give us such a faulty recommendation?”

Trump repeated the accusations against the UN health organisation at a White House briefing later on Tuesday.

UN spokesman Stephane Dujarric rejected the criticism of the WHO, which is led by director-general Tedros Adhanom Ghebreyesus.

“For the Secretary-General (Antonio Guterres), it is clear that WHO, under the leadership of Dr Tedros, has done tremendous work on Covid, in supporting countries with millions of pieces of equipment being shipped out, on helping countries with training, on providing global guidelines — WHO is showing the strength of the international health system,” he told reporters.

Dujarric added that the WHO had also recently done “tremendous work” in putting its staff on the frontlines to successfully fight Ebola, an infectious and often fatal disease, in the Democratic Republic of Congo.

WHO officials on Wednesday denied that the body was “China-centric” and said that the acute phase of a pandemic was not the time to cut funding. The US is the top donor to the Geneva-based body which Trump said had issued bad advice during the new coronavirus outbreak.

US contributions to WHO in 2019 exceeded $400 million, almost double the second largest member state contribution. China, in contrast, contributed $44 million.

“We are still in the acute phase of a pandemic so now is not the time to cut back on funding,” Dr Hans Kluge, WHO regional director for Europe, told a virtual briefing in response to a question about Trump’s remarks.

Republican Senator Lindsey Graham, a close ally of Trump, vowed there would not be any funding for the WHO in the next Senate appropriations bill.

“I’m in charge of the appropriations subcommittee. I’m not going to support funding the WHO under its current leadership. They’ve been deceptive, they’ve been slow and they’ve been Chinese apologists,” Graham said in an interview with Fox News Channel.

Chinese foreign ministry spokesman Zhao Lijian, asked on Wednesday about Trump’s remarks during a daily briefing in Beijing, did not directly address the criticisms but said Tedros played an important role in promoting international cooperation to combat the pandemic.

The number of coronavirus cases in New York state alone approached 150,000 on Wednesday, surpassing Spain for the most infections anywhere in the world, even as authorities warned the state’s official death tally may understate the true toll.

New York and New Jersey on Wednesday again reported new single-day highs for coronavirus deaths. New York state has 149,316 reported cases compared to Spain's 146,690, according to a Reuters tally. In total, the US has recorded more than 417,000 coronavirus cases and 14,100 deaths.