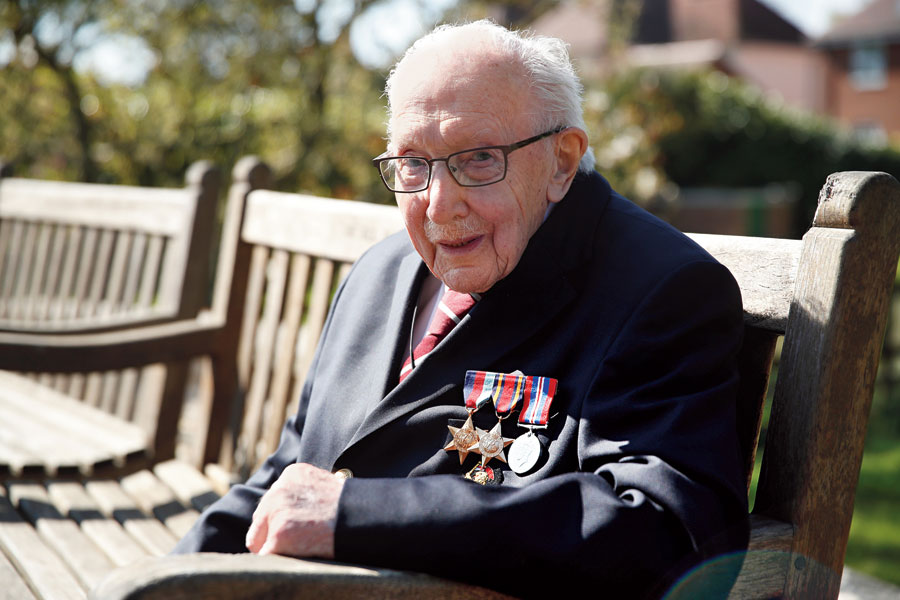 Captain Tom Moore, a former British army officer who served in Calcutta during World War II, had intended to raise £1,000 for the NHS by marking his 100th birthday on April 30 by doing 100 laps of the 25-metre loop in the garden of his home in Marston Moretaine, Bedfordshire, in 10-lap segments.

But by the time Moore, aided by his walking frame, had completed his mission on Thursday morning, donations from 620,000 people in 53 countries had taken the total on his fundraising page to over £15m — a record for a single campaign on “JustGiving”.

It is all a long time since his days in India. Moore was conscripted into the British Army in June 1940 when he was 20, and began his military career in Otley, West Yorkshire, where he joined the 8th Battalion, the Duke of Wellington’s Regiment under Lieutenant Lord George Saville.

This might explain why, when donations hit £10 million late on Wednesday night, Moore tweeted “Virtutis Fortuna Comes” — the Latin motto of the Duke of Wellington which means “fortune is the companion of virtue”.

In October 1941, his unit was posted to Bombay, with the sea voyage, via Cape Town, taking six weeks. He took a train to Poona and joined the 50th Indian Tank Brigade, where he was asked by his commander to start a motorcycling course for the Brigade because of his expertise in the sport.

He was next ordered to move to his base in Calcutta — the journey during the monsoons took three weeks — and later took part in two exercises in the Arakan before moving to Rangoon.

After all in his background, he probably thought his walk in England, even at 99, was a bit of a doddle.

Still, among those who applauded his fundraising achievement was Ben Stokes, Wisden’s cricketer of the year, who said: “The funds you have raised for the real heroes (in the NHS) are just sensational.”

Chancellor Rishi Sunak said Moore’s “extraordinary” efforts “goes to show the British spirit is as strong as it’s ever been”, while the health secretary Matt Hancock remarked, “This is an awful crisis, but there are some little shafts of light…. He’s served his country in the past and he’s serving his country now, both raising that money for the NHS, but also cheering us all up.”

As the sprightly dressed 99-year-old, with his medals gleaming in the spring sunshine, finished his mission, there were TV cameras and journalists to record the occasion plus four soldiers from the Yorkshire Regiment to give him a ceremonial salute.

An emotional Captain Moore, then revealed that he had postponed his 100th birthday party and that after a short rest he would resume his walk.

He added an uplifting message to people in Britain and beyond: “You’ve all got to remember that we will get through it in the end, it will all be right but it might take time. All the people are finding it difficult at the moment, but the sun will shine again and the clouds will go away.”

He said that NHS workers on the frontline “deserve everything we can give them”, and that “I’ve always been one for having a future, I always think things will be good. We’ve fought so many battles and we’ve always won and we’re going to win again.”